Yesterday, Love Island participant Cassidy McGill broke her silence via Insta after a pic of her with a plate of white powder did the rounds in late December.

Overnight, the story became global news after it was picked up by the likes of The New York Post and Page Six, both of which are affiliated with news.com.au. 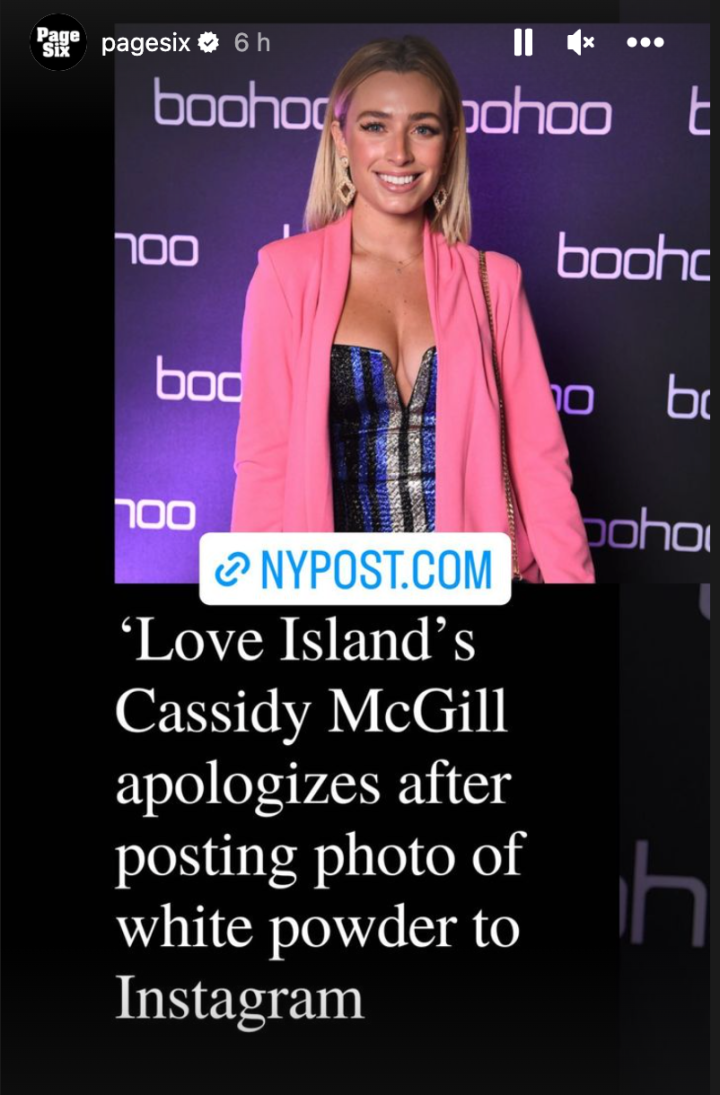 The story was published on the New York Post and shared to Page Six’s socials.

This is a most unexpected development given that Love Island Australia isn’t really a big deal over there so it’s odd that they covered the story.

But I guess the intrigue of the story is more the WTF nature of it all rather than the celebrity herself.

Yikes, what a way to go viral overseas.

“The Australian reality star turned influencer who was photographed holding a plate with white powder last week has posted an apology to her followers on social media.

Love Island Australia’s Cassidy McGill posted, then swiftly deleted, the photo in question on her Instagram Stories last Wednesday night. It was then widely shared online.

In the image McGill – who appeared on season one of the popular dating show – could be seen sitting on the floor in a pair of blue jeans, with a white plate perched on her knee.

Two lines of white powder were clearly visible on the plate, alongside a small bag containing more of the same mystery substance.”

McGill’s statement came in the form of an Instagram Story and featured a beach with five paragraphs of text written over it. 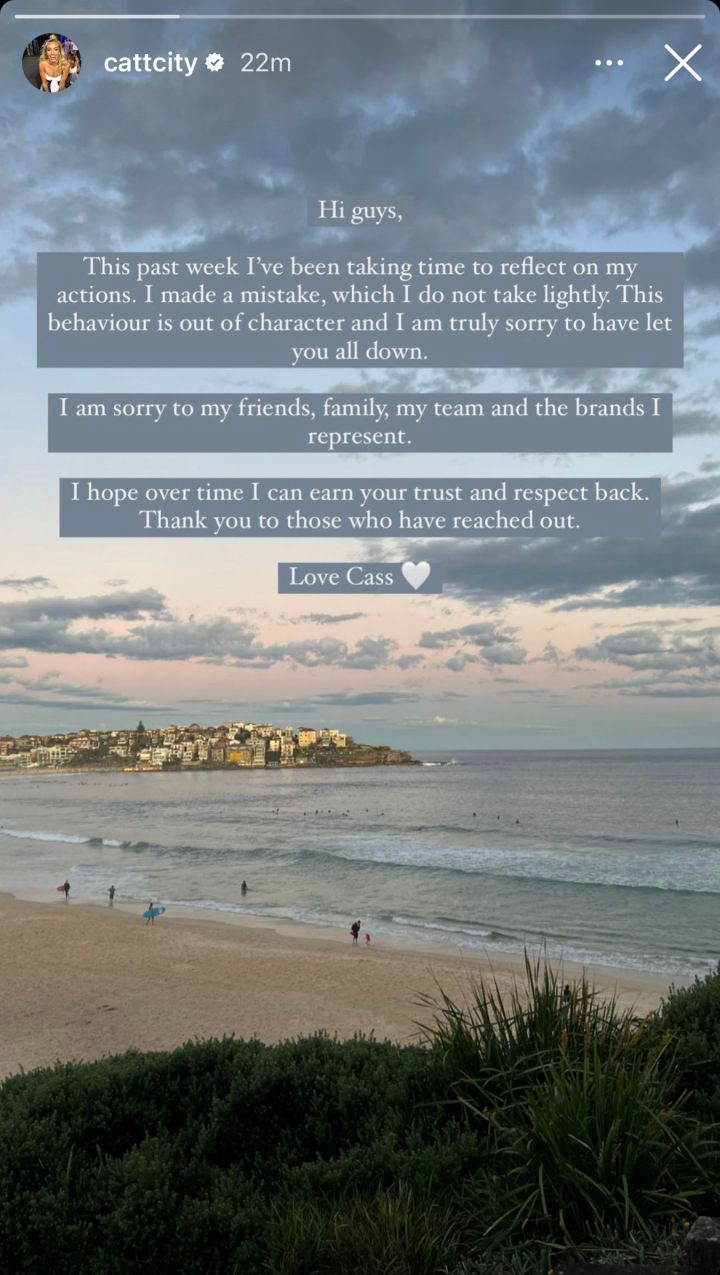 “This past week I’ve been taking time to reflect on my actions. I made a mistake, which I do not take lightly. This behaviour is out of character and I am truly sorry to have let you all down.

“I am sorry to my friends, family, my team and the brands I represent.

“I hope over time I can earn your trust and respect back.

“Thank you to those who have reached out.

Well, there you have it.

Influencer Updates AU initially shared a screenshot of an Instagram Story that was allegedly posted by an “unnamed local influencer”.

In the photo, the previously anonymous blonde posed with a plate, a rolled up fiver and a bag of white powder.

It’s very much giving Nadia Bartel, although it’s currently unclear if that’s Kmart crockery or not. 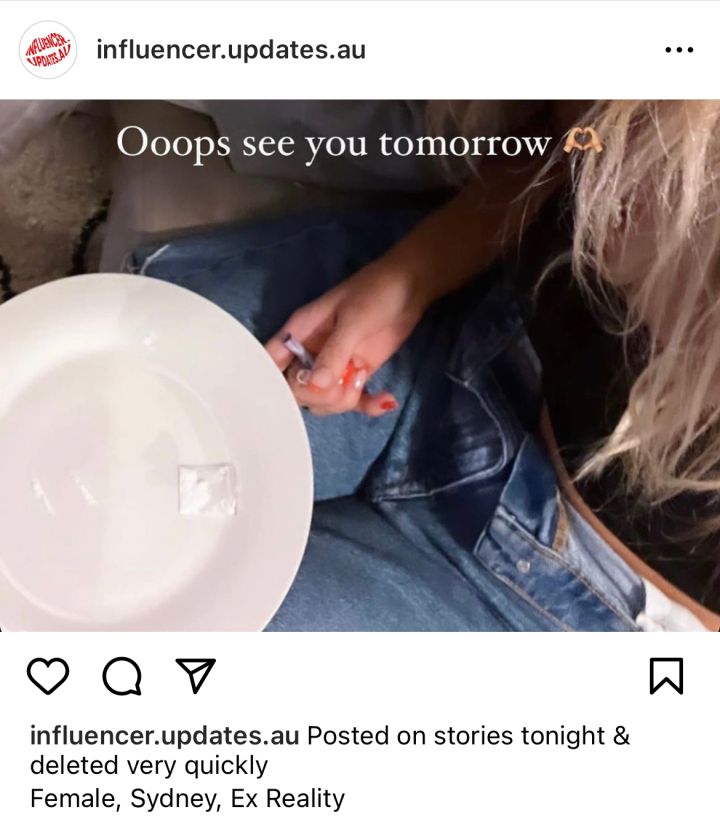 Comments began flooding in with guesses as to who it could be.

Before long, Influencer Updates AU herself had deleted the post for unknown reasons.

It was later revealed by So Dramatic! that the influencer in question was, indeed, Cassidy McGill from Love Island Australia.

It’s baffling to me how this keeps happening.

Do influencers mean to post these things to their Close Friends Story or send as a DM but accidentally hit the public post button?

I don’t understand how one can make such a huge fuck-up with something so, erm, shall we say delicate?

Especially when you make a living off posting to Instagram and should therefore have an intimate knowledge of how to bloody use it.

She was so damn close to being Nadia Barteled!

ICYMI: a video of the fashion designer and former wife of AFL star Jimmy Bartel was accidentally uploaded in September 2021 which appeared to show Bartel snorting white powder off a $1.50 Kmart plate surrounded by a group of three friends (two without masks) during lockdown.

The three-second video was uploaded by Bartel’s friend and Spray fake tan business co-owner, Ellie Pearson. Of course, it was quickly deleted, but as it turns out not quick enough. Screenshots of the vid quickly went viral all over social media and Australian media outlets.

Bartel later issued a statement apologising for the incident and said she takes “full responsibility” for her actions.

“Hi everyone, I have let you all down by my actions,” she wrote on Instagram.

“I take full responsibility and I am committed to taking all necessary steps to ensure I make better choices in future.

“To my family and friends, my business partners and the public health workers trying to keep us all safe, I am embarrassed and remorseful.

“I am truly and deeply sorry. I hope I can earn your forgiveness and, in time, your trust.”

Victoria Police confirmed to the Daily Mail that no further action will be made in this case.

However, Bartel and her friends didn’t walk away entirely unscathed.

Not only did Bartel face a huge hit to her reputation and a reported friendship bust-up, but the group also copped fines of $5,452 each for failing to comply with lockdown restrictions during their illegal gathering.

While we’re obviously out of lockdown now, sharing footage of yourself on social media with white powder is never a good idea. Unless you’re, I dunno, baking frosted cookies.

And, again, it’s always people like this Aussie influencer who relies on social media and public perception to make dollarydoos who frequently give us this footage we did not ask for.