There are some Australian institutions that I hold absolutely dear: beach cricket, ‘Rage‘, the Holden VL Commodore, telling someone “nice hat” when their hat is bad, and the Bunnings snag.

This low-key hero spent decades unrecognised for both its cultural significance and convenient deliciousness. We took it for granted. We parted with our gold coin in return for the delightfully portable treat without ever stopping to think about how weird it is that only we as a country do this or, more importantly, how awesome it is.

But we know now. Like all good things, the Bunnings sausage sizzle has become a meme. Its sister event, the democracy sausage, managed to get recognition overseas, as other countries realised what we didn’t – that this is a very odd practice.

Now, though, some people have surely taken this antipodean culinary jewel to its furthest logical end: the deconstructed Bunnings snag.

While this is surely intended as a joke (please God let this be a joke), it still speaks of a deranged mind who is hell-bent on destroying everything that is good in this world (or just someone who was keen for a laugh, you be the judge).

The Melbourne Flames Dragon Boat Club made the bold decision to be cheeky buggers with some fundraising efforts in Brunswick over the weekend, offering a regular, wholesome sausage sizzle alongside their “new hipster deconstructed sausage“, which is surely an affront to God’s creation. 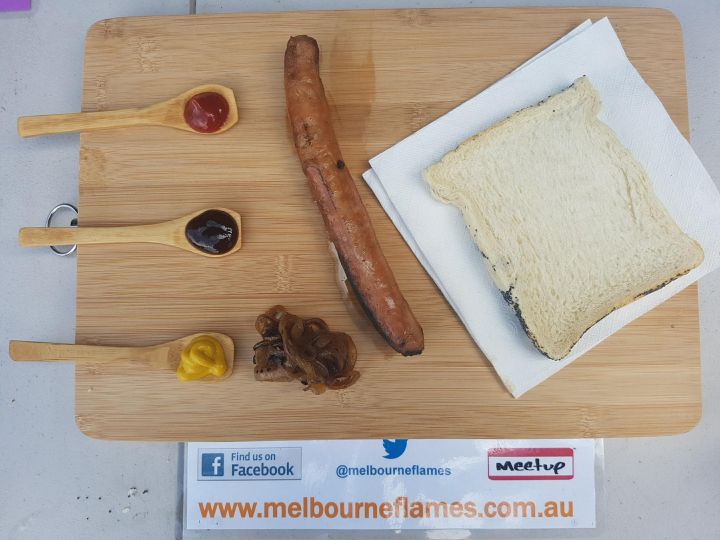 Also, either they’re also using some very fancy bread or that’s some mold on the outside, but, hey, this is a display model only, so no big deal I guess.

Response on social media was mixed – and by mixed I mean at time of writing this there was one Facebook comment and the bloke did not seem chuffed: