OH MY GOD YOU GUYS. IT HAPPENED AGAIN.

Another person has turned down $1000 of cold, hard, catch-free cash. That makes two in less than 24 hours.

It’s all part of TODAY‘s segment ‘Grand In Your Hand‘, which involves sending their weatherman Stevie Jacobs accosting total randos on the street and shoving wads of $100 bills in their face.

Why the weatherman, you ask? No idea. Maybe he’s making it rain.

Also low-key have you ever seen anyone more excited to be a weatherman? 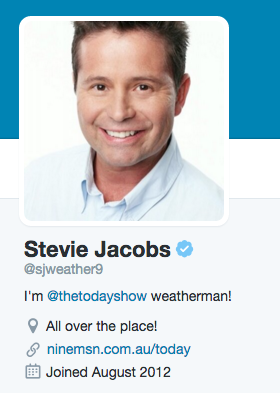 Yesterday when he tried giving one thousand smackeroonies to a woman, she straight-up refused it and walked along her merry way.

(Hey, we’ve all developed a certain thick skin from years of skirting by charity muggers and that one hairdressers on George St (Sydney) with women outside 24/7 trying to hand you stuff, but this is giant wads of cash. We’d take the risk, ya know??)

But less than 24-hours later, and ANOTHER person has declined to take the giant wad of cash. Stevie approached a woman at a train station this morning (she writes, sounding like a police report) and attempted to hand it over.

The woman continues to laugh / side-eye. “I don’t think she believes me!” he says, and finally, eventually, gives up.

Oh no, not again! Stevie’s traveling around the country giving away $1000 in Random Acts of Cash, and this woman isn’t having a bar of it! #9Today

Once the cameras stopped rolling, however, they explained how this free money bid works and successfully passed her the cash.

Yes we finally got her to accept the $1000. Go the Grand In Your Hand! @TheTodayShow pic.twitter.com/M3F0USaYOz