The World Of Warcraft Tributes To Robin Williams Are Beautiful

We’ve been living in a world without Robin Williams in it for just on a month now, and I for one am still nowhere near done being bummed out about that fact. Fortunately, the world is actually full of nice people who do nice things, believe it or not. And this is absolutely no exception to that rule.

Williams was famously an avid gamer – his love of the Legend of Zelda series was so great he named his daughter for it. He also actively maintained a World of Warcraft account, logging many, many hours of play in the sprawling MMORPG. Following his untimely passing, Warcraft creators Blizzard were quick to announce that they were working on an in-game tribute to the iconic comedian and actor, immortalising him inside the world of Azeroth, and a fervoured fan campaign only encouraged those tributes further.

Now, thanks to a little internet trickery, we’ve got our first look at what those tributes – there’s more than one – are going to entail. Players exploring the beta version of the upcoming Warlords of Draenor expansion have managed to locate several in-game, non-player character nods to the late actor.

Firstly, an ever-burning lamp has been found in the game. When players rub it, a Genie appears, who then recites the famous line from Aladdin, first saying “INFINITE* COSMIC POWER!” before retorting with “Itty bitty living space!“

*We know the line is actually “PHENOMENAL cosmic power!” We assume they’ll fix that before the launch.

Nearby is another NPC – this one not-so-subtly named Robin – who looks a hell of a lot like Williams’ breakthrough TV character Mork, standing next to a broken egg, much like the one that Mork travelled to Earth in in Mork & Mindy. 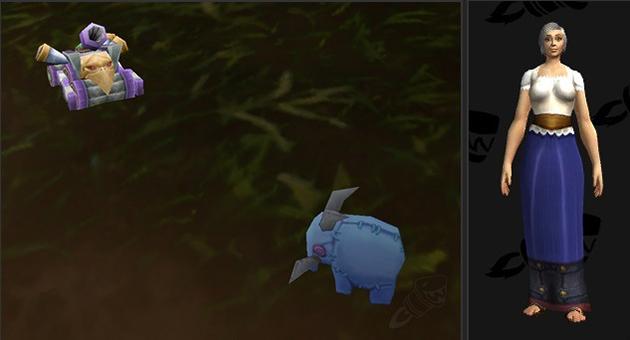 Finally, there’s these – perhaps a little subtler – tributes. A pair of toys that look quite similar to ones featured in the movie Toys, and another NPC named Robin who appears to be dressed not at all unlike Mrs Doubtfire.

Though Blizzard is yet to officially confirm any of this, it’s safe to say the spirit of Robin Williams will remain alive and well within the World of Warcraft for many years to come.