A TikTok star from NSW’s Mid North Coast is under fire for appearing to compare her limited freedoms as an unvaccinated person to *checks notes* the Holocaust.

Mills has been spreading her anti-vaxxer views on social media throughout the pandemic. In one TikTok, she joked about cutting off friends after finding out they had gotten vaccinated. In another video, she expressed interest in men who refused to get the vaccine.

Now, in a series of disturbing Instagram photos, Sarah Mills appeared to make a number of references to the Holocaust, in which an estimated six million Jewish people were killed.

In one photo, she adorned her family with yellow six-pointed stars, appearing to reference the Star of David Jewish people in Nazi-occupied Europe were forced to wear. The stars were emblazoned with ‘NO VAX’ and the caption reads:

noun
1.
the power or right to act, speak, or think as one wants.

2.
the state of not being imprisoned or enslaved.

I live in regional NSW so we’ve been living freely for a while now, until today. Yesterday I was safe to be in public, today I am a threat. 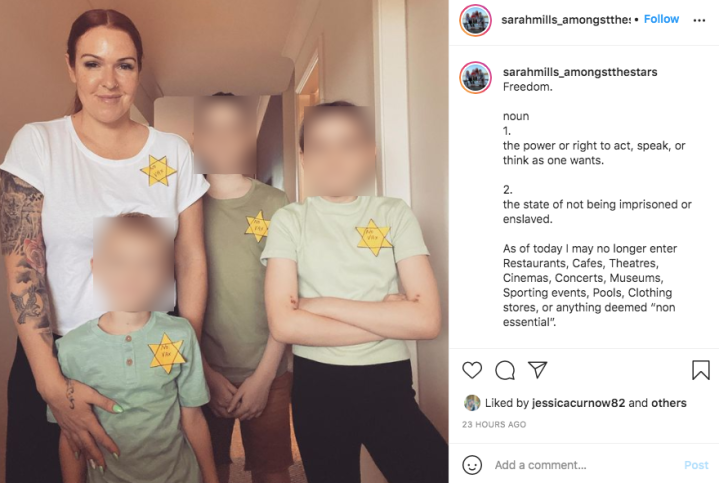 She went on to ask why she wasn’t allowed in retail stores but was allowed in supermarkets and hospitals (uhhh, it’s called the essentials), and claimed this was a case of “history repeating itself”.

“If you’ve wondered what you would’ve done in the past, take note because you’re doing it now,” she said. “To those out there feeling segregated and judged, you are not alone. We see you and we thank you for standing firm in your beliefs.”

She concluded, “There is no such thing as freedom of choice unless there is freedom to refuse.”

In another photo, she dressed in striped pyjamas, which look very similar to the striped uniform worn by prisoners of Nazi extermination camps. (As her costume also includes a prisoner number, she could be alluding to the concept of a prisoner more broadly. Although Nazi extermination camps like Auschwitz initially sewed prisoner numbers onto clothes, the sheer number of people they killed made it hard to identify corpses, as the clothes were removed and reused. Schutzstaffel guards began tattooing prisoner numbers directly onto people’s skin, instead.)

“Hey guys! I’m trying to get organised but I’m a little confused! Does anyone know where we get our full uniform? I’ve found the shirt but wasn’t sure if there’s anywhere you can get them as a set? Or are we just provided them upon arrival?” she wrote.

“Such confusing times for all! If you know, you know. Sending love to my future inmates, see you soon! #historyrepeatsitself #whichsideareyouon.” 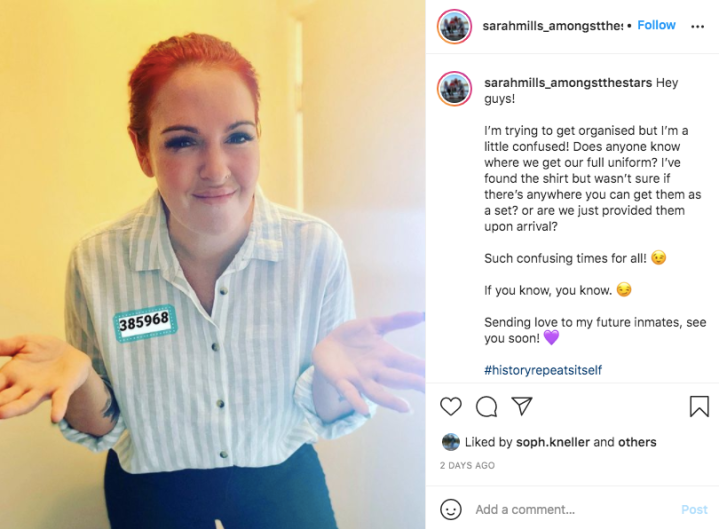 In another post, she got her kids to hold signs that read: “Fuck your mandates.”

She captioned the post, “I said show me fierce, Morrison delivered. If you think I’m opinionated, wait to see these souls when they grow up. Raising WOLVES not SHEEP. Your hate fuels my desire to stand behind my beliefs louder than ever.” 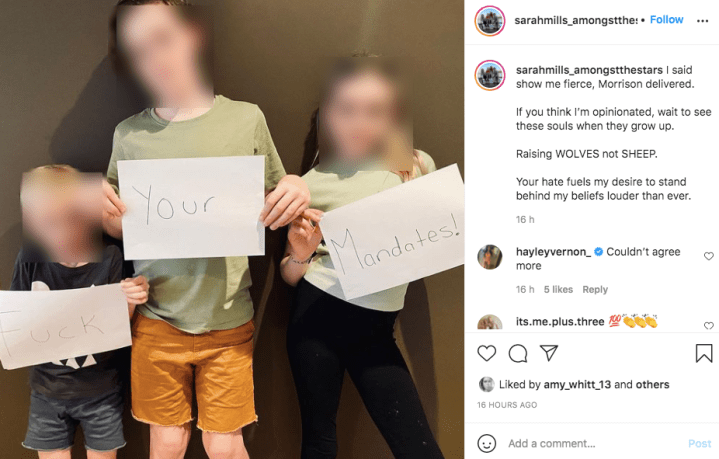 She also shared a subsequent photo in her striped top and in the caption, she appeared to show no remorse.

“I didn’t make it through all I’ve been through to be broken by comments from people completely irrelevant to me. This mama has thick skin and wears it proudly,” she wrote. 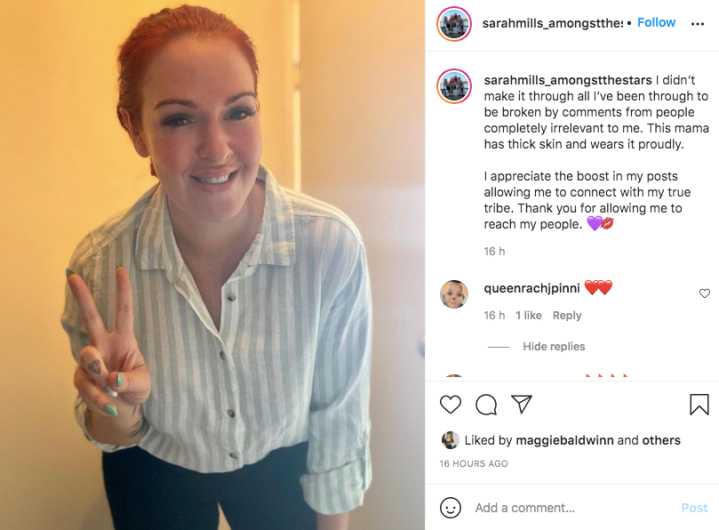 In a statement to PEDESTRIAN.TV, Sarah Mills denied she was comparing lockdown to the Holocaust, but instead wanted to highlight where “that ‘them/us’ situation” began.

“We live in the most disgusting cancel culture where people think they have every right to abuse anyone that doesn’t align with their beliefs,” she said, claiming that she’d been sent death threats.

“I was not saying this lockdown was comparable to the holocaust (sic). Full stop.

“There is a whole community being discriminated against and bullied for their personal medical choices. That’s not okay.

“I am in NO way comparing the deaths of millions of people to not being allowed into kmart, but people need to look at where that ‘them/us’ situation began and the whole story of it is far too deep for any mainstream media.”

On December 1, almost all restrictions will lift for unvaccinated people.

According to the Australian Government Department of Health website, the vaccine “will protect you from getting severely ill or dying if you get COVID-19.”

The vaccines work by “training your immune system to recognise and clear out the virus, before it makes you seriously ill.” It also reduces your risk of spreading the disease and infecting other people.

If you haven’t booked your vaccination yet, then here’s an easy step-by-step guide to doing so.