The first US presidential debate of the 2020 election campaign has finally drawn to a close, silencing ninety minutes of bloated arguments, interruptions, and cheap, bitchy bullshit.

It’s our job to simplify the complex, presenting audiences with the information that matters to them. But the simple truth is that what President Donald Trump and Democratic Party contender Joe Biden delivered was very, very stupid. I feel worse for having watched the whole thing.

Regardless, here are some of the half-cooked points which are actually worth noting.

When asked by debate moderator Chris Wallace whether he’d be willing to disavow white supremacists, Trump told the Proud Boys – a far-right group the FBI classifies as an extremist organisation – to “stand back and stand by”.

Trump: “Proud Boys — stand back and stand by — but I’ll tell you what…somebody’s got to do something about Antifa and the left” pic.twitter.com/sHEbt4mf4Q

That didn’t sound like a disavowal to me. Nor did it sound like a rejection to Proud Boy supporters themselves. Here’s one screenshot from the social media platform Parler, showing how some Proud Boys have responded to Trump’s words: 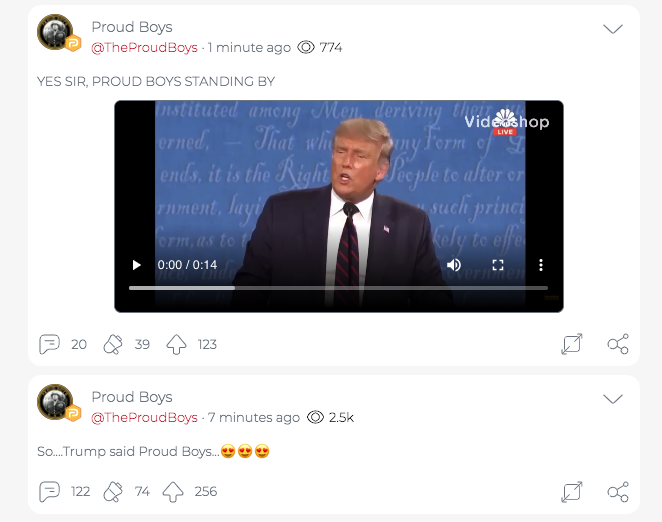 2. When a question of race becomes support for the police

Trump and Biden were asked why voters should trust them to alleviate America’s racial tensions over the next four years.

It was a clear reference to the deaths of Black men and women like George Floyd and Breonna Taylor, both of whom died at the hands of police in 2020. The question also reflected the protest movements sparked by their deaths, and their calls for true, restorative justice.

Trump almost instantly pivoted the debate to boast about how much cops like him.

He turned the discussion to allegations that radical leftists were behind much of America’s recent civil unrest, ignoring the cause of those protests – and the fact that law enforcement agencies have been responsible for much of the violence.

Not much of the debate was really clear, but this was: when asked about genuine pain at biased, bigoted policing, Trump said, “the
people of this country want and demand law and order and you’re afraid to even say it.”

In April, well before America’s COVID-19 death toll surpassed 200,000, Trump used a press briefing to touch on a dangerous ‘cure’: straight-up shots of disinfectant. Not great.

When Wallace asked about plans to develop and distribute an actual coronavirus vaccine, Biden said his opponent was ‘the same man who told you… Maybe you could inject some bleach in your arm.’

“That was said sarcastically and you know that,” Trump shot back.

It wasn’t a sarcastic statement. The fact that the US President thought to present his throwaway line about a potential coronavirus curative as a joke – when he knew people were dying! – kind of speaks to how fucked the place is.

4. It’s getting hot in here

Biden’s campaign actually has a climate change policy. It calls for the creation of green jobs and a drastic reduction in America’s carbon emissions. It’s not perfect, but it’s there.

Given the fact a huge chunk of the US was recently on fire, you’d be forgiven for thinking that’d be an important addition to the debate.

However, Trump deliberately conflated the issue of climate change with clean air, pure water, and a focus on forest management.

He also shat on the Paris Agreement on climate change, which the US ditched in 2017.

President Trump points to forest management as the cause of the wildfires in the West, but avoids specifics on his climate change beliefs. #Debates2020 https://t.co/McrHYPnMbj pic.twitter.com/EIBsZYXZ1W

5. But what’s going on with Biden?

None of this is to say that Biden put up a particularly inspiring debate performance, mind you.

The former Vice President did himself few real favours: his responses weren’t exactly sharp, he allowed himself to be interrupted, and didn’t have an answer for much of Trump’s spiteful vigour.

Comparatively, Trump’s stream-of-consciousness style of bullshit did net the POTUS some viral clips, which will likely wind up in campaign ads after the debate.

Oh, Biden did call Trump a clown though, so there’s that.

"It's hard to get any word in with this clown. Excuse me, this person," Biden said after Trump interrupted him while he answered a debate question pic.twitter.com/oiDliSfs78

Much of the time, the debate felt like wading through melted wax: it was painful, and only became more of a trudge as time went on. I’m not sure Biden did much to help that.

Both nominees steamrolled Wallace in the debate, with Trump being the worse offender. At multiple points, the debate turned into indecipherable noise, as three men with a combined age of 223 struggled to direct the conversation.

Joe Biden: "Will you shut up, man?" #Debates2020 https://t.co/oXZEIYMzl6 pic.twitter.com/Lm7gkXUPAC

“That was a shitshow,” CNN’s Dana Bash on the #Debates2020 pic.twitter.com/nsDvxDgj9i

Get ready for even more of the fucking things, though, with two more scheduled before the election on November 3.