It is our most solemn of duties to inform you all that Pete Evans is absolutely still on his usual bullshit, this time via the open endorsement of one of the more notably bananas anti-vax Podcasts currently doing the rounds.

Late yesterday arvo Evans, the current and enduring star of Channel Seven’s My Kitchen Rules who previously sold a cookbook for babies containing recipes that might actually kill one, took to his Facebook page which sports a truly insane 1.5 million followers to let everyone know that he’s not terribly jazzed about vaccinations either.

Evans openly endorsed, and linked to, a Podcast from Paul Chek – a self-styled “expert” in “corrective kinesiology” who previously asserted that vaccinations are “the great controversy of the 21st century” and that those who have them are getting their health “stolen.”

The episode featured guest Dr. Sherri Tenpenny, who quite infamously had a planned 2015 Australian speaking tour binned amid an ocean of opposition from actual doctors. Tenpenny is notable for being one of the more prominent anti-vaccination voices in America, and routinely pedals the notion they cause autism in babies. This is despite repeated studies, including one published literally this month, asserting that they absolutely fucking well do not.

Evans, who claims sunscreen is a myth and believes staring directly into the sun is medicine, linked to the Podcast and thanked Chek for “asking the questions that need to be asked.” 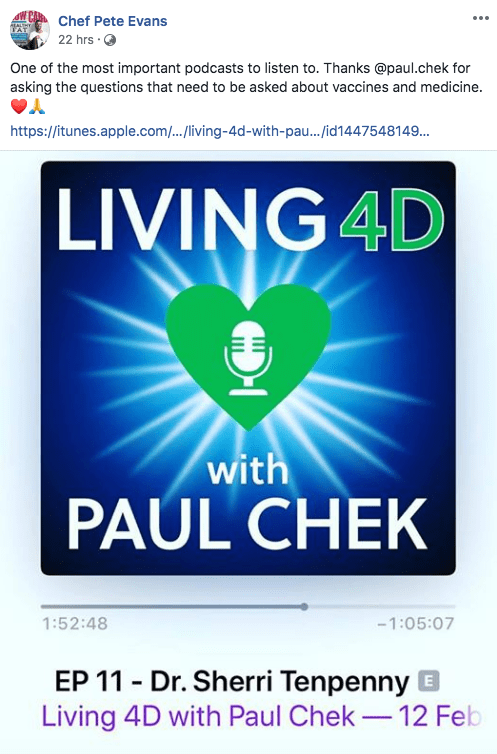 The Australian Medical Association has once again been forced to take time out of its day to respond to Evans’ latest big brained blast, torching the keto-loving twerp in a sizzling rebuttal posted to social media a short time ago.

Personally, we’re far bigger fans of Evans’ most recent social media work, which finally attains the level of input from him we want to see.