If you pre-ordered Kanye West‘s album ‘The Life of Pablo’, then boy oh boy – you a true contender for the title of ‘King/Queen of patience’, my friend.

You might have received an email similar to this, which told you that your pre-order was only ‘several days’ away (LIES), but you could listen to a ‘partial version’ on Tidal. 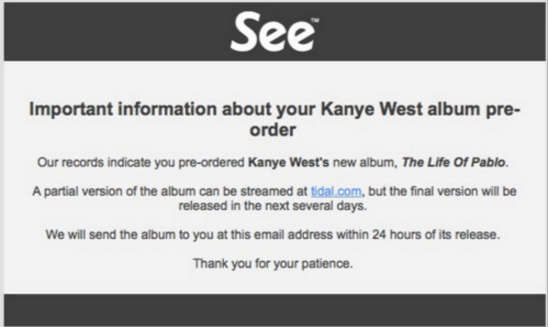 However, despite creating what was possibly the strangest and most convoluted album roll-out of all time, Yeezy has let us know that he ain’t done yet. That partial album is partial for a reason – it isn’t finished. He is updating it constantly, until he’s finally satisfied that it is the best it can be.

Most people wait until that point to release an album, but not Ye. He wants to beta test his music on you. And he is succeeding.

It feels cleaner, like there’s a second voice behind Rihanna‘s lines , and he’s changed the lyric from ‘She be Puerto Rican parade day wavin’‘ to:

“She be in school to be a real estate agent.”

According to this Snapchat yesterday from Kim Kardashian, Ye at least seems to be happy with how the album’s sounding?

That must mean we’re getting closer to the final edit, people. Maybe. Probably not. We don’t even know anymore.

Kanye‘s finally followed through on a promise he made very shortly after he dropped ‘The Life of Pablo’ on Tidal – he told us he would fix ‘Wolves’.

He tweeted this last month:

And this morning, he tweeted this:

Fixing Wolves 2day… Worked on it for 3 weeks. Life Of Pablo is a living breathing changing creative expression. #contemporaryart

A whole month. A whole month we had to listen to some bizarre verse about sandwiches, and we had to cringe at those three bars where everything was completely out of sync. And, we never quite forgave Mr. West for taking Sia and Vic Mensa out. We deserved better than that, Ye.

But, it’s okay everyone. They’re back. And the new, updated version sounds dope as hell. Sia’s ~I was too wild~ vibes will stay with you for hours after you listen, and Ye’s reworked it to make it god-like and holy. He did, after all, tell us that this would be a gospel album.