Look, we’ve all watched enough David Attenborough documentaries to have accepted sharks as a necessary and, yes, even a beautiful part of nature. They have their place in the natural order of things and do only that which they were born to do. They are as valid and as precious as any other living creature on this Earth. They also happen to be fucking terrifying.

Some deep part of the human brain, left over from way back when we were fish, understands on a very primal level that the silhouette of a shark often — but not always — spells very bad trouble. I’m no evolutionary psychologist, but it is my belief that even if someone was raised in a lightless box for their entire life, they should instinctively shit their pants upon seeing a nasty big great white.

If I were to quantify what constitutes a nasty big great white, I would place it somewhere in the ballpark of this, a 4.6-metre great white that caught got in shark nets off Sydney‘s Maroubra: 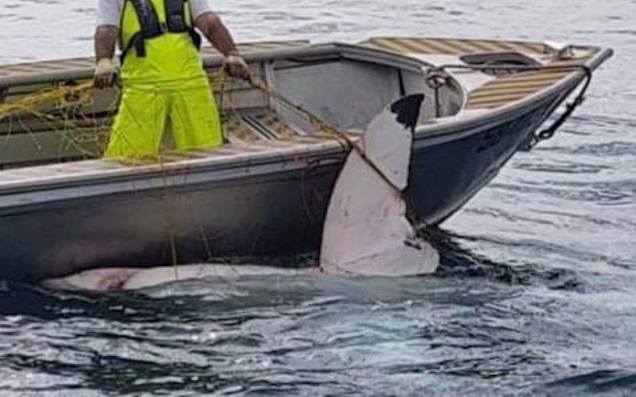 Photos of the dead shark were posted to Facebook by fishing blogger Jason Moyce, who stressed that he didn’t catch the shark or take the photo. The images appear to originally have been captured and put online by Adam Cree from Blue Reef Fishing Charters, in a post that has since been taken down.

In the post, Cree said that the shark would have weighed easily a tonne, with pectoral fins a metre in length and a tailfin over two metres long, which is definitely not small.

A spokesperson for the NSW Department of Primary Industries told Fairfax that that shark, measuring 4.65 metres long, was found this morning by contractors doing a routine check of the nets, and that the body of the shark had been retrieved for a necropsy.