The World Health Organisation declared the coronavirus a global health emergency today, making it only the sixth time a global pandemic has been declared.

It’s a last resort measure by the WHO, and reflects the seriousness of the situation. The death toll now stands at 170 people in China, with 7,818 confirmed cases in 18 countries around the world, including Australia. There have also been at least eight cases of human-to-human infection, in Germany, Japan, Vietnam and the United States.

Here’s everything you need to know.

What does it mean now coronavirus is a global health emergency?

It’s defined by WHO as “an extraordinary event which is determined to constitute a public health risk to other states through the international spread of disease and to potentially require a coordinated international response”.

The declaration means WHO director-general Tedros Adhanom Ghebreyesus has authority to make recommendations on controlling the global spread of the disease, including restrictions of travel. However, Ghebreyesus is not currently recommending limited trade or travel to China.

“Let me be clear, this declaration is not a vote of no confidence in China,” Ghebreyesus said.

“Our greatest concern is the potential for the virus to spread to countries with weaker health systems.” 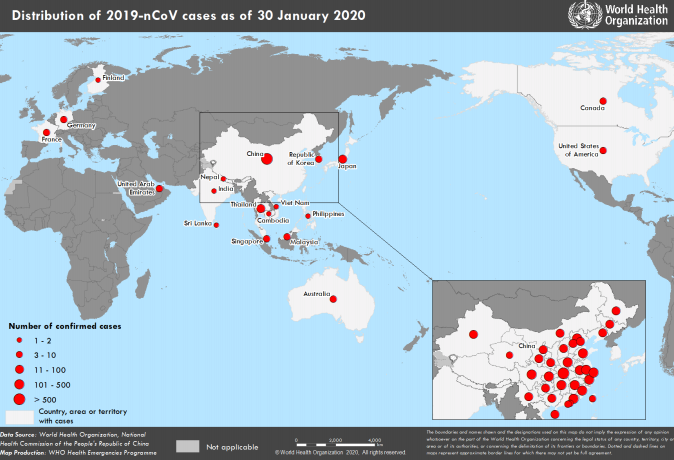 Why did they only declare it a global health emergency now?

WHO has been reluctant to declare a PHEIC, reportedly in part because it looked like the spread could be contained, and in part over fears it could harm China’s economy. Most confirmed cases were in people who had recently travelled to Wuhan, where the virus broke out. However, with the confirmed person-to-person cases, WHO is not taking any risks the virus could spread to countries with poor health systems.

Although the organisation has no authority over other countries, it can governments for scientific justifications of any trade or travel restrictions they impose in the event of an international emergency.

What’s going on with the Aussies stuck in China?

Well! That’s a whole mess. You can read PEDESTRIAN.TV’s explainer here, but the short version is that the Morrison government’s proposed plan to quarantine them all on Christmas Island isn’t going to plan. Qantas, which would transport the people, can’t land its 747s on the Christmas Island tarmac, experts are warning the hospital might not be equipped to deal with worsening cases of the virus, and Australia doesn’t have permission from China to evacuate the hundreds of citizens yet, anyway.

So how about that vaccine, huh?

Scientists are racing against the clock here, and Australia is leading the way. Melbourne’s Doherty Institute successfully grew a sample of coronavirus in its lab this week, the first key stage in finding a vaccine. Using that work, the CSIRO will today start growing large batches of coronavirus in order to create a vaccine, and plans to begin animal testing within six weeks.