If you could see us right now – like, if you were standing next to us at PEDESTRIAN.TV HQ – you’d know that the entire editorial team is doing the Mexican wave equivalent of an eyeroll.

You know the loose British dude who was onboard the EgyptAir plane hijacked by Seif Eldin Mustafa for reasons still TBC (but that authorities say is “an idiot, not a terrorist”) and took the opportunity to pose for a quick photo with his hostage-taker?

Benjamin Innes, a health and safety auditor from Aberdeen in the UK, has publically declared his happy snap with Mustafa – who was only later confirmed to be wearing a belt of mobile phone covers, not explosives – is “the best selfie ever”.

He told The Sun of his #motives:

“I’m not sure why I did it, I just threw caution to the wind while trying to stay cheerful in the face of adversity… it has to be the best selfie ever.”

Mustafa allowed all but seven of the 62 people on board flight MS181 to flee once it landed, and Benny Boy was one of those held back (all were later released unharmed).

After about half an hour of sitting around doing sweet FA, he decided he may as well get visual documentation of the hostage situation in case he never made it out alive.

“I figured if his bomb was real I’d nothing to lose anyway, so took a chance to get a closer look at it.”

Ben Whatsapped the photo to his mates from the plane, because of course he did.

Daily Mail used its infinite powers of payment persuasion to obtain a screenshot of the braggy conversation: 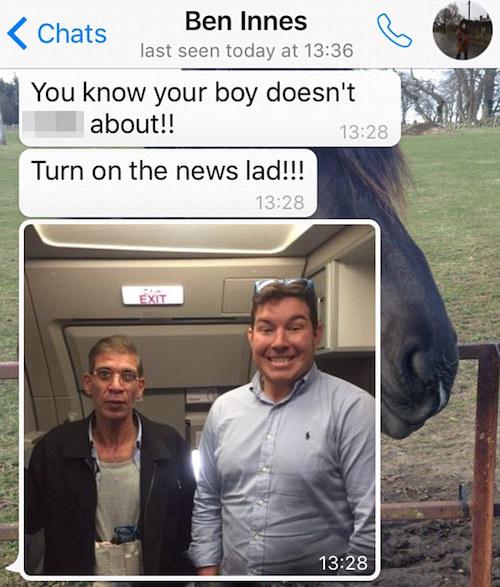 While we’re discussing the incident, it’s worth clearing up several incorrect uses of the word ‘selfie’ in relation to Ben’s photo – including by the man himself.

By its truest definition, a selfie is taken by oneself – and it’s clear that, despite several reports to the contrary, this particular photo was taken by someone else, apparently an airline steward.

Ben’s mother Pauline wants to clear that right up once and for all, stating: “All we can say is that the picture is clearly not a selfie as everyone has been describing it. You can clearly see that it is not Ben who is taking the picture. He’s in it but he’s not taking it.”