Belle Delphine, The Cosplayer Who Sells Her Own Bathwater, Is The Queen Of The New Grift

On Patreon, Delphine offers a tiered subscription model where users can pay anywhere from $50 to $2500 for content. Want access to her private Snapchat account? That’ll be $50 a month, thanks. How about a custom photoset? That’s closer to $1000.

Earlier this month, Delphine made headlines for selling small jars of her bathwater for $30. She sold out rapidly, struggling to keep up with demand for what is ultimately a very easy product to produce.

While all of this is interesting and funny and undeniably a little weird, Delphine has nonetheless experienced a meteoric rise in popularity. At the start of the year she had just over two million followers on Instagram. She now sits at just over four million.

The mainstream spotlight is good for Delphine’s bank account, but has also brought substantial negative attention to her image and her means of crafting it. Before 2019, Delphine made her following largely because of her look – a sort of manic pixie dream girl meets anime faerie – and also because of the face she pulls in so many photos: ahegao.

chomper but the only thing i eat is dicc go chop on some of my content on patreon;) www.patreon.com/belledelphine

Ahegao is term from Japanese pornography, describing the facial expression of an animated character during sex, eyes rolled back and tongue out. In many of Delphine’s photos it is her go-to pose. On YouTube, there are compilations of her making the ahegao face with literally hundreds of thousands of views.

Inside and outside of the sex worker community Delphine has faced criticism for a persona which many say deliberately suggests an underage girl. She faces allegations of appropriating the controversial Lolita subculture, and allegations that she previously stole the photos of other sex workers. In some photos, Delphine wears braces, which some maintain is a ploy to look younger rather than serving a corrective purpose.

Also in Delphine’s favour is the fact she has created a multi-platform character and business which is to a certain extent anonymous. She could probably walk out of her house without makeup and without her coloured wigs and go largely unbothered.

On her YouTube account, Delphine has uploaded a video that now has over 1.5 million views of her “best friend”: a dead octopus with googly eyes that she kisses and pats and has bubble baths with. Last week on Twitter, a video of Delphine having dozens of raw eggs poured over her went viral. Did she make these things to serve some niche kink? Maybe. Did she make them to go viral off the back of that uncertainty? Absolutely.

This is my best friend !

While the easy imagination is that a bunch of people hunched over their keyboards have bought a teenager’s bathwater to satisfy a fetish – some almost certainly did – it’s also true that jars of the stuff have been purchased by other creators who just want to feed the content beast.

Now, every YouTube creator is thinking of a way to get on the Belle Delphine bathwater train. Hundreds of thousands of views have already been generated from dozens of creators ‘trying’ it, or reviewing it, or talking about it, or literally just having it in their thumbnail. 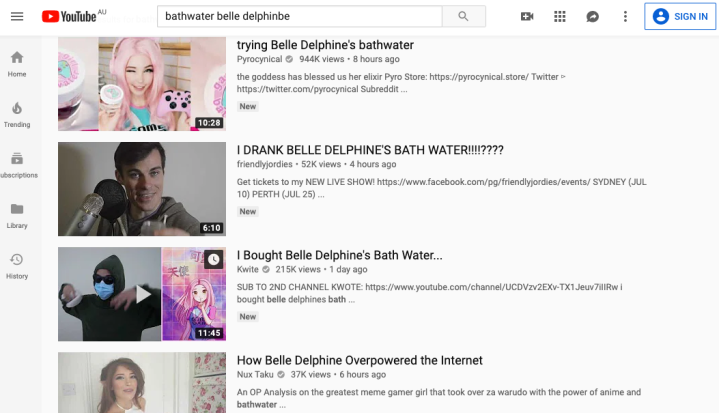 As comedian Avery Edison points out, its only a matter of time before a lifestyle blogger on Instagram starts their own bathwatfer under the new, Pinterest-ready label of something like “birth water”, a holistic memento for the masses.

Anyway, I guarantee in a few months some holistic GOOP-lite Instagrammer is going to be selling her *birth*water. And I salute her.

Drinking Belle Delphine’s bathwater is the new throwing batteries into the sea, a more sexed-up version of Rick & Morty’s Szechuan sauce. Maybe Jake and Logan Paul will buy some and walk along city streets throwing it on their friends. Maybe they’ll even drink it! Who cares. People are already plugging her bathwater into a vape pen. It’s all part of the zeitgeist now.

While Delphine can play the game without censorship, earning headlines in international publications, other sex workers are rarely so lucky. The online sex industry is forced to tiptoe through the grey areas created by social media platforms and their respective terms of service, with many often finding their accounts deleted overnight for alleged violations. Snapchat’s Snap Map, which shares location, has reportedly outed the location of numerous sex workers. Last year, men in the United States were threatening to report subscription-only sex workers to the IRS to audit their undisclosed income, and at the start of this year a new law that conflated sex trafficking with sex work led many platforms to delete huge chunks of adult content.