I love bacon. Betting you probably do, too.

I don’t really need anyone to sell its virtues to me, ‘cos I’ve tasted its many forms and long ago declared it to be one of my favourite foods.

NSW bacon purveyor Jeff Rapley not only felt the need to increase sales of bacon at this shop, but he decided a sign stating that the consumption of his award-winning rashers would help keep terrorism at bay would be the right way to go about it.

Specifically, that eating it “reduces your chance of being a suicide bomber.”

Here’s the sign that unsurprisingly graduated from Jeff’s Narooma shopfront to the Internet after a customer complaint. 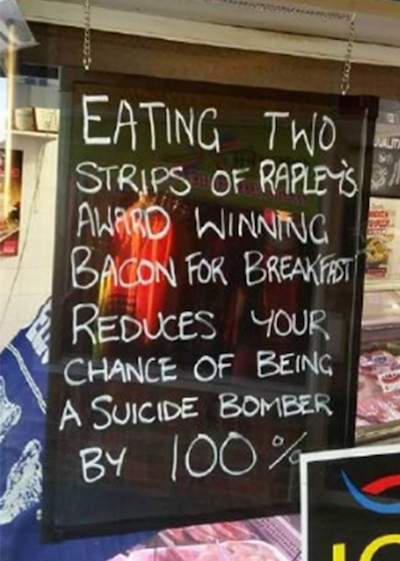 The sign’s been taken down, and Jeff insists he’s unfairly being labelled racist because – wait for it – he employs a Muslim shop assistant.

“I’m definitely not a racist and didn’t mean for it to cause offence,” he told the local paper.