In a way, you can’t blame Andrew Bolt. With one very noteworthy exception, writing terrible opinions has only ever been a highly rewarding pursuit for him. The pleasure centres in his brain lighting up like a fucking Christmas tree whenever he publishes an insane opinion piece, he has effectively been trained to at all times produce the worst possible take. Now, it is purely instinctual for him to take any given issue and turn it into a short post that makes you stare into the depths of madness like Klaus Kinski in Aguirre: The Wrath of God. 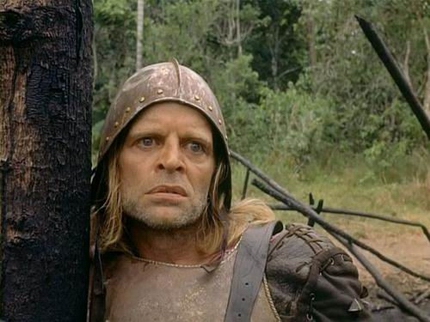 I've said this before but we are living through stupider times than when people drank the water they shat in. pic.twitter.com/Lk8f0ItR5U

The take-home message for Andrew Bolt, a man whose brain has somehow been wired in reverse, was that the show paints too grim a picture of radiation:

Chernobyl, the hit HBO series about the world’s worst nuclear disaster, does prove one scary thing about radiation.

It makes people blind. Dangerously blind to the truth.

Bolt specifically takes issue with the death toll listed at the end of the show:

HBO’s much-praised fictionalisation of the 1986 explosion at an appallingly designed Soviet reactor ends with the claim that between 4000 and 93,000 people died from the radiation poisoning.

In fact, more people died from the scare than from the disaster itself — just as we now suffer more from policies to “stop” global warming than from any warming.

(Just as a side note to that bizarre last comment, a study published earlier this year suggests that we will shortly be looking at over 250,000 deaths a year globally due to climate change, at a conservative estimate.)

Bolt believes that that number is smaller. A lot smaller:

One thing that makes this speculation so sick is that the science now is actually quite clear: the known death toll from Chernobyl is fewer than 100.

The death toll from Chernobyl remains an issue of debate, and will likely never arrive at a hard figure. The numbers presented at the end of the show come from, at the low end, a 2006 UN study that was criticised for being too conservative, and a Greenpeace study that estimated the eventual deaths at somewhere around 93,000.

Bolt comes to the very logical conclusion that, instead of a prestige TV show about a historical event, the show is anti-nuclear propaganda, and also that climate change is fake:

But scares sell, and calm sense does not. That’s why nuclear power remains so demonised today, and why global warming is causing such needless panic.

And the irony there?

It’s that nuclear power is actually the power source warming alarmists should be demanding — reliable, relatively cheap and with zero carbon emissions.

But to people addicted to fear, what’s the good of a solution?