Clutch your pearls and start writing your local minister, Beryls of Australia. Because the ABC, out of sheer blue nothing, put a full-on dick – a penis, balls and all – on the air in full view of the nation last night. Shocking! Appalling! Tax dollars etc!

On last night’s episode of Shaun Micallef’s Mad As Hell, an otherwise reasonably straightforward sketch on defamation had a rather girthy full stop added to it when a man, in all his buck-ass naked glory, appeared in a doorway with little-to-no warning.

The segment concerned Christian Porter‘s defamation lawsuit against the ABC, which the former attorney-general ingloriously trashed earlier this week for reasons largely unknown.

In a heavily bleeped to-and-fro, Micallef and cast-mate Francis Greenslade discussed some of the finer points of defamation law, and what can (but more significantly can’t) be said on a national TV show.

While the segment itself was more beep than word, when the topic turned “generally to censorship at the ABC,” there emerged a nude man, dong hanging out and everything. 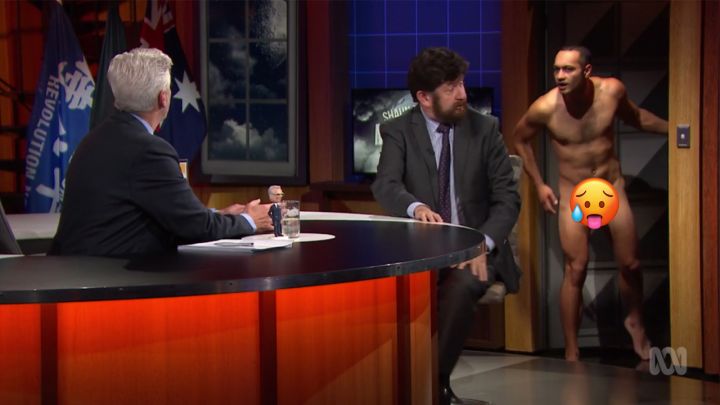 The nudeman mentioned that “Ita wants to wind the segment up now,” before disappearing just as quick as he emerged, and the show moved on without mentioning it again.

Of course, the ABC’s standards for censorship are a little different to ours, and we can’t exactly run the uncensored dong in this article without ruffling the feathers of [pointing everywhere] our lovely advertisers! But I simply cannot stress this enough: There was a dick, in full view, on the ABC. Absolutely incredible stuff.

The footage doesn’t exist in embeddable form, but if ye wish to gaze upon it for yourselves, you can find last night’s episode – in all its glory – over on ABC iView. For those of you with precious little time to waste, the segment in question starts at 11 minutes and 57 seconds.

If old mate’s hanging shadow is anything to go by, we’re in for a long winter.