FYI, FOMO Says All Those $500+ Lizzo Tickets Currently Listed On Viagogo Are A Scam

A full day out from the general on-sale date, ticket scalping website Viagogo is already sporting several listings for tickets to the hotly anticipated Lizzo headline show in Melbourne, with prices soaring well above $500 in what’s almost certainly a scam trap for desperate punters.

FOMO officials launched a pre-sale for the show at the relatively not-that-big Forum Theatre in Melbourne, with the show scheduled to take place on Wednesday, January 8th.

The pre-sale allocation was snapped up within literal seconds leaving scores of keen punters high and dry, even those who logged in at exactly 9am this morning when the pre-sale was thrown open.

Even though the general public on-sale doesn’t open until 9am tomorrow, listings for tickets on Viagogo, a self-proclaimed “re-selling” service, appeared virtually instantly, with prices soaring to just shy of $600. 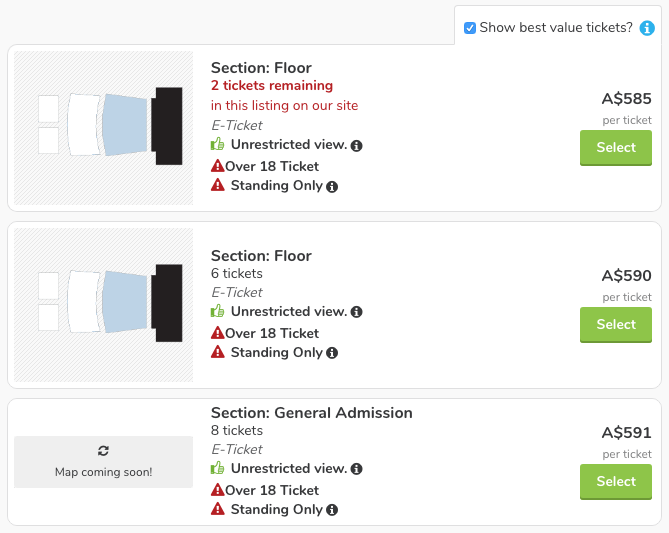 The listings are particularly perplexing as well, given FOMO officials have previously confirmed that tickets for the show will not be issued until Monday, January 6th, just 48 hours prior to the event.

READ MORE
Lizzo Just Announced A Pair Of Australian Headline Shows, Including At The Opera House

FOMO social media posts indicate that over 50% of tickets for Lizzo’s only non-festival appearance in Melbourne were allocated in this morning’s pre-sale.

Though it didn’t officially sell out until several minutes past 9am, all tickets were reportedly tied up almost instantly after being placed into user carts.

Yes! As soon as the tickets went on sale they were added to carts

Ticketmaster social media posts confirmed their services were working as normal and did not buckle under massive demand. Pre-sale ticket access was available only via a clandestine link emailed to FOMO pre-sale subscribers late last night, accompanied by an access code. The pre-sale allocation could not be accessed via the public Ticketmaster event page. There is some suggestion on social media that tickets may have been available to purchase prior to the clock striking 9am, however that is unconfirmed at this stage.

Viagogo was slapped down by the Federal Court earlier this year for conduct that was “liable to mislead the public” and that contravened Australian consumer law.

FOMO officials issued a statement to PEDESTRIAN.TV slamming Viagogo for allowing the likely illegitimate listings, stating “Lizzo’s Melbourne sideshow tickets are sold only via Ticketmaster. Tickets are dispatched 48 hours before the show – literally none of those bots are selling valid tickets. Please don’t be fooled!” See below for more about their Dob in A Scalper initiative.

The general public on-sale for Lizzo’s Melbourne show opens at 9am tomorrow morning. Tickets for her headline show at the iconic Sydney Opera House go on sale later this week.

Here’s what FOMO officials are urging you to do if you spot scalper tickets online:

We urge you to be aware that Lizzo’s Melbourne sideshow tickets are sold only via Ticketmaster. Tickets are dispatched 48 hours before the show – literally none of these bots like Viagogo are selling valid tickets.

Ticketmaster was unsurprisingly met with remarkable demand for the Lizzo pre-sale this morning at Forum Melbourne. As advertised, the pre-sale allocation for this show was released at 9AM today (Monday 18 November) and sold out very quickly.

With Lizzo being one of the most popular artists in the world right now, demand was always going to be extremely high. We expect the same demand for the general on sale tomorrow. Those who miss out will have a chance to see Lizzo perform at FOMO Festival in Melbourne on Sunday 12 January.

We encourage you to participate in our DOB IN A SCALPER initiative. If you find anyone trying to sell Lizzo tickets for extortionate prices please email us at hello@fomofestival.com.au and we’ll ensure FOMO/Ticketmaster/Forum Melbourne investigate it. We want tickets in the hands of REAL fans and we want to take these scamming ass-hats down.

To clarify, one more time, Viagogo, eBay or Facebook Marketplace are NOT authorised ticket sellers.

If you have successfully purchased tickets for the Lizzo sideshow at Forum Melbourne through Ticketmaster, you will be sent your tickets at 9AM Monday 6 January. This means no one will have tickets in their account until this date. Any posts you see from Viagogo or similar claiming to have tickets to sell are FAKE. Scammers on these pages do not have valid tickets to sell and are just trying to swindle you out of your money.

We urge you – please don’t be fooled.