Aussie DJ Tigerlily – real name Dara Hayes – has come out swinging, after nude photos of her were leaked online.

To summarise: she posted an entirely censored Snapchat video to her channel, covering her breasts and nether regions with emojis / drawings.

But using an unofficial iPhone ‘jailbreak’ app called Phantom, some absolute douche-canoe removed the overlays on the image before posting the uncensored photos of Tigerlily’s naked body to the internet.

Overnight, they were shared on multiple platforms including Reddit. 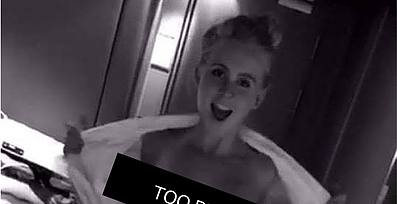 A snippet of the Snapchat.

In a statement released to PEDESTRIAN.TV, Tigerlily – who’s repped by Melbourne-based Lucky Ent, the same artist agency that only last week reaffirmed its pro-women stance as a company after one of its graphic designers was embroiled in a nude photo leak scandal – condemned the act as a “sex crime”.

“As you may or may not know, in the past 24 hours there has been some content of me spread online,” she wrote.

“I am a young confident woman and I share many aspects of my life and who I am on social media. When I share content I make a conscious decision to do so. The content that has been ripped from Snapchat, edited and distributed is being done so against my will. As Jennifer Lawrence said ‘It is not a scandal. It is a sex crime. It is a sexual violation. It’s disgusting.’

How would you feel if this was happening to your best friend, your sister, or your girlfriend? It wouldn’t be such a laugh then I’m sure?

I’ve spoken out many times against misogyny, sexism and online bullying, and in the past 24 hours I’ve seen just how vulgar and childish some people can be.”

She also made sure her female fans know that, despite what’s happened, she’s proud of her body.

“Although the crime that has been committed is NOT OK, being proud of your body and who you are IS OK. Girls – Do not ever be ashamed of your body. Do not ever let anyone else ever treat you with anything but absolute respect. You and your body are completely perfect just the way you are and you all deserve to know that and be told that each and every day.

The voices of love and support both private and public have been truly inspiring. I’ve read so many of your messages and I feel empowered by the strength and positivity of the beautiful people I have in my life.

To my friends, fans and those choosing not to partake in the invasion of my privacy, I thank you.

Events like this only make me more determined to keep on path. To keep playing and writing music, exploring the world, and being so honestly myself each and every day.

Love yourself and love one another.”

And to whoever did this?