Chill Less/Do More: How To Get The Best Outta 12+ Hours At Laneway Fest

Laneway Festival hit Oz last weekend, and we know y’all are pumped – after all, that’s why tickets sold like hotcakes and why Laneway sold out in Sydney and Melbourne. Since you’re so pumped about the whole she-bang, we figured we’d help you Melbournites make the most of it. PEDESTRIAN.TV partnered up with Budweiser to tell you what to expect, what you can’t miss, as well as how to jam the most into a day that already boasts a sick AF line-up. If you’re in Melbourne, make sure you check out all the stalls and markets we can’t wait to get around this Saturday.

Laneway is well and truly underway and the shows so far have been as incredible as expected. With the Melbourne show just around the corner, we thought we’d compile the can’t-miss-shit you gotta check out in order to make the most of your day.

When you get in, you can legit valet your bike, right before you head to the bar for some icy cold Budweisers. 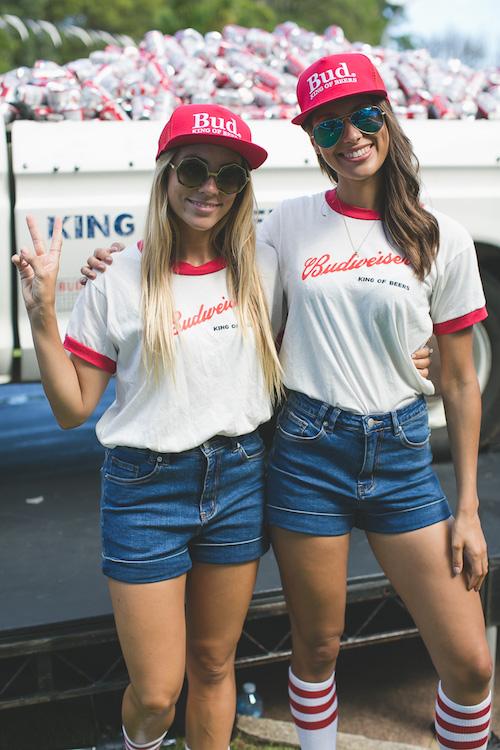 Now that you’ve quenched your thirst a little, it’s time to hit up the markets, because Laneway does markets like no other festival.

First up, frost yourself in some new shit, courtesy of the coolest jewellery designers around, from Next Romance, Gemma Johnson Jewellery, Chip The Teacup, and Artomic Art.

If you’re looking for a wild, festival-glam look for Laneway, head over to Glitoris‘ stall, where they’ll spruce up your look with a fuckton of A+ glitter.

Let’s be real, it’ll probably be hot AF, so what better way to cool down than with cult-fave gelato Messina?

Need some new duds? Laneway’s got you covered, with original designers Lenko, and Limedrop setting up stalls for the day.

If you’re feeling a more ~vintage vibe~, you can head to Marci Vintage or Muscrats Vintage, who’ll also be setting up shop for the day.

Feeling a little arvo-fatigue? Recharge with a burger from Juanita Peaches.

Laneway boasts some incredible local artists, so make sure to clear some time in your schedule to check out Daughters Of Doom, as well as Unfazed And Confused.

But obvi, the main reason to attend Laneway is the music. CHVRCHES slayed “Gun” in Singapore, and they’re bound to do the same down under, so be sure to not miss their epic set, at the Dean Turner Stage from 9:10pm.

You’ll probs be hungry again after dancin’ ya booties off, and what better than some delish seafood from Mr. Calamaro?

Grimes will get everyone in the mood to party with “Be A Body“, so she’s one to check out for sure, from 8:05pm at The Very West Stage.

Headliner Flume is guaranteed to get the whole crowd moving and just generally kill it, so obvi a CANNOT-MISS-UNDER-ANY-CIRCUMSTANCES act. Flume’s up on The Very West Stage from 9:25pm.

If the end of the day comes and you still feel like there’s never enough music in your life, well, we have two more options for ya. First, make sure to check out Polyester Records at some point through the day, as they’ll be slingin’ sick vinyls from their stall while all your faves are onstage.

And finally, Laneway has lined up a mad afterparty at the Max Watt’s. FIDLAR is playing live, and CHVRCHES will keep you bopping with a sick DJ set. And hey, maybe you’ll hear some Tay Tay along the way.

Fascinator will also perform live, and there’ll be DJ sets from The Smith Street Band, Japanese Wallpaper, and resident Laneway DJs, so you know it’s going to be an incredible night.

After you’ve made the most of your ~Laneway experience~, you’ll defs want to do it all again next year. Head to the Budweiser Ford F100 truck sometime through the day for your chance to win tickets for you and three of your friends for next year’s Laneway. Goals.