Why Is ‘The Land Before Time’ So Fucking Sad?

I have but one memory of watching The Land Before Time from when I was a kid. It’s sitting in front of my block telly, aggressively sobbing because Littlefoot’s mother is dying. The rain is pouring down and the little dinosaur doesn’t understand why his mum can’t stand up. Her voice is kind and warm, and with every passing second, the lull between her words grow longer and longer. I haven’t watched the movie since I could jam the tape into a VHS player. But I know, I know, that if I watched the dinosaur movie again, I’d have a big ol’ cry. So let’s, shall we? Since it’s on Netflix now anyway.

I don’t remember The Land Before Time as a sad movie, but as an animated family film from 1988 with one (1) painful scene in it. The rest of the film? Bloody delightful, I think? Let’s find out. The plot’s simple: all the dinosaurs are making the journey to the Great Valley where there is plenty of food for everyone to eat. A terrible drought has dried up the land so the dinosaurs must make the pilgrimage. The main character is Littlefoot, a long-neck dinosaur, whose species consist only of his grandma, grandpa, and mum (WHO DIES). Mum carks it saving Littlefoot. I can’t type anything more about it otherwise I’ll cry again and this yarn will never be finished. Roll the damn tape.

It’s a children’s movie, not Sophie’s Choice, so why is it so sad? Well, here are my thoughts.

I grew up on Disney films like Mulan and Aladdin – films with minimal conflict and endings that made you feel six-feet tall. I was surrounded by warmth, with the belief that the world is inherently good and evil will always be defeated. I hadn’t watched The Lion King yet or Bambi, and had no real concept of life and death.  There was certainly no expectation that this film was going to emotionally crush me. I was four! It’s a talking dinosaur movie!

The start of it is so perfect too, so perfect that you forget it’s not a Disney movie. Little dinosaurs are hatching from their eggs. Baby Littlefoot is so cute.

This scene takes place about six minutes into the movie. You immediately get attached. 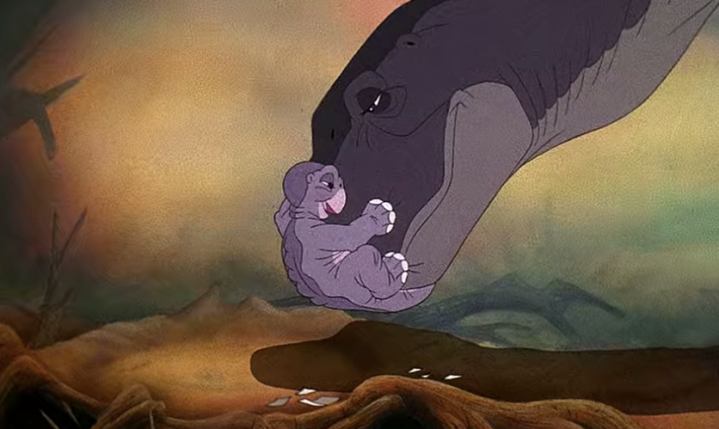 And this happens 13 MINUTES LATER. 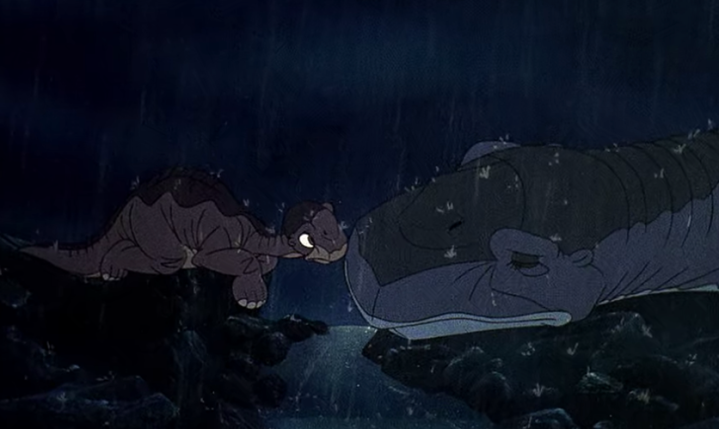 I said what I said. When Simba finds Mufasa, he’s already dead. It’s still an incredibly sad scene, but the father and son don’t share any final words with each other. It’s just Simba tugging desperately at his dad’s ear, hoping he’ll wake up.

Littlefoot finds his mother dying. She tries to stand up but collapses, so she spends her final breaths telling Littlefoot how much she loves him and how she’ll always be in his heart. And then she dies while Littlefoot cries, “Mother? Mother?!”

3) The voice acting and the dialogue

Full marks to Gabriel Damon for once being a small child with that quintessential pure, innocent, naive, must-be-protected-at-all-costs kid voice. Combine that with the dialogue – like in the death scene – and you get a sharp shooting pain in your heart. I mean, c’mon – Littlefoot couldn’t understand what his mum meant by “I’ll be with you even if you can’t see me.” He literally replied, “What do you mean if I can’t see you? I can always see you?” AND THEN SHE DIED.

Bleak, I know. But for four-year-old Steff, the death scene was the moment I realised Mums and Dads die. Death is real, everybody dies. I don’t remember doing this, but Mum said I clung onto her for hours after I first watched the movie with her. Consider The Land Before Time my awakening to the cycle of life – when I realised my parents aren’t always going to be there.

4) It taught me about grief

I have a soft spot for kid movies, especially ones that are brutally honest. Rewatching this movie as an adult, particularly the scene where a wise old dinosaur named Rooter explains the concept of life to Littlefoot, made me realise this is the movie adults put on to teach kids about death and grieving. Nice one, Mum.

E.g: Littlefoot tells Rooter that his “tummy hurts” because he can’t stop crying, and the older dinosaur tells him that the pain will fade in time.

Not to mention the credits song, ‘If We Hold On Together’ sung by Diana Ross.

The bit when the music swells, when Ross sings, “Dreams see us through to foreverrrrrrrr”, gets me every single time.

About six hundred words ago I said there is only one incredibly sad scene in The Land Before Time. I was wrong.

“And Littlefoot knew for certain that he was alone. And that though the Great Valley was far away, and the journey there was perilous… he would have to find his way.” THIS IS WORSE THAN HIS MOTHER’S DEATH SCENE.

7) The realisation they all die in the end anyway

Because an asteroid hits Earth. I hate this movie.

The Land Before Time is an hour and eight minutes of deep melancholy and I’m never watching it ever again. There isn’t just one or two depressing scenes in it – the entire goddamn film is just one excruciating experience. The end.