Overnight, a great, ancient power emerged from the dense forests of Kashyyyk, demanding the entire galaxy pay respect to the Wookiee race.

By that, we mean an American woman put on a Chewbacca mask while sat in a car park, took a Facebook Live video, and essentially redefined what it means to go viral.

ICYMI – and you must have been trying really, really hard to do so – Candace Payne’s mirth-inspiring clip has been viewed nearly 100 million bloody times.

Welp, in the aftermath of that joyous piece of organic content, the only people happier than Payne’s audience are presumably Disney’s merch guys, ’cause sales of that talking mask have gone boonta.

A cursory glance over at eBay demonstrates how crazy sales to the imminent imitators have been. While most vendors are happy to let the newly-minted #iconic mask go at around $60 a pop, people are prepared to drop triple figures on these bad boys:

More telling: the ferocity at which y’all Star Wars fiends have been clambering to get ’em. Check out the Aussie Toys ‘R’ Us store, folks: 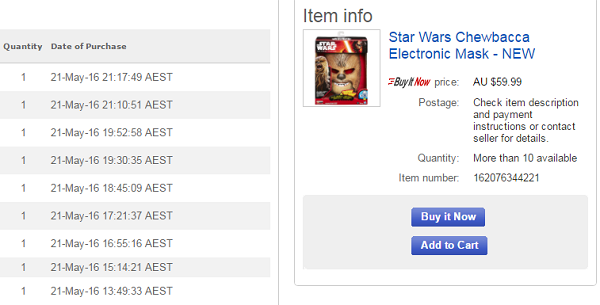 The story is much the same over in the US, where reps for the handily name-dropped Kohl’s and Toys ‘R’ Us both said they’d sold out.

That means, un-bloody-believably, there’s already a growing secondary market with prices nearly quintupling the US $20 retail:

At this rate, we give it another day until scruffy-lookin’ nerf herders flood the market with counterfeit talking Wookiee masks. We live in an interesting time, people.

As for Disney and Hasbro? Well.