Tonight it is the second round in The Showdowns phase of The Voice Australia. After contestants from Team Seal and Team Ricky pulled out some satisfying performances on last night’s episode, the crew from Team Delta and Team Joel will be on stage doing their thing tonight. The show and our live blog begin at 7pm on Channel Nine.

Here’s a sweet gif of Delta I found on Tumblr. Thanks, Internet!

7:05pm: Tonight Delta is wearing a grecian purple dress and large gold jewellery around her bicep and wrists. The whole thing is quite Game Of Thrones. She just wants to see her artists shine tonight. Is that too much to ask? First to perform is Rob Edwards, the large handsome bald guy who started crying on stage once. Pretty sure I called him a pussy at the time.

7:12pm: Rob is singing “Impossible” by James Arthur. I honestly can’t understand a single word he says other than “impossible” which, for me, is a problem because there are at least twenty-three thousand words in the song before getting to the “impossible” part. But that doesn’t matter, because who needs things like enunciation and clear diction when you are a very attractive person who can sing in tune most of the time? Alright, no need to be sarcastic. He was fine and the judges loved him. Delta’s just so happy he’s finally getting to be the artist that he wants to be and should be and Australia’s getting to see it. Yew. Seal is really into Rob’s tone. Seal has said the word “tone” more than most people say most things, and ALMOST as much as Seal rolls and smokes spliffs each day (in my imagination, at least).

7:20pm: Next to perform from Team Delta is Jackie, the talented teenage girl who plays the piano. She’s singing a song I’ve never heard of called “Arithmetic” by Brooke Fraser.

7:24pm: Holy smokes you guys. Jackie is sublime. She only just turned 18 and effortlessly knocked that shit out on the piano – by herself no less – and sang like a freaking angel. Seal says she was “spellbinding” and closed his eyes during the performance. “Your voice is like a warm breeze, it just washes right over me,” Seal continues, with his reverse cowl-neck knitwear that is poleaxing whatever part of my brain looks after logic.

7:27pm: I don’t want to say things I might later regret, but I truly think Jackie might be my favourite contestant.

7:33pm: Next from Team Delts is Josh who Delta thinks has “flawless tone and technique”. I think he looks like the Australian actor Stephen Curry. Delta is trying to bring Josh/Stephen out of his shell. He’s taking on the vocally challenging Kimbra song “Settle Down”. Let’s see what this kid can do.

7:35pm: Well… that is a really tough song to sing, and not everyone is a virtuoso jazz fairy like Kimbra, but I think he kinda did a satisfactory job of it. “Whatever that was, I thought it was cool,” says Joel Madden, although who knows if Australia will agree with him or be thinking “whatever that was, I thought it wasn’t David Guetta-y enough”. Delta, of course, is a mad Josh/Stephen Curry fan and gushes enthusiastically about his perfect pitch. NEXT?

7:44pm: Old mate Steve Clisby is next for Team Delta. He’s singing “God Bless The Child” by Billie Holiday, a song about as old as Steve. He’s got a warm, listenable voice and is a really comfortable performer – probably a benefit of being a 67-year-old veteran of the scene. Do you think Steve says the word “scene”?

7:47pm: Let’s see what the coaches say. Seal says “this is perhaps the only time in the show when the roles are reversed. You become the coach and we become the students,” and says he is humbled by Steve’s gift. Joel says “I will be shocked if you don’t make it through these showdowns,” then says that HE is going to go home and vote for Steve. Ricky is so overcome with positive vibes he has nothing to say except asking Steve for a hug. They all need to calm down a little. Steve was fine but the judges are laying it on painfully thick tonight and are clearly suffering from a collective case of chronic elder respecting. I’m pretty sure the old guy is going through this round.

7:58pm: Alright, we’re on to Team Joel. His first performer is Danni who’s only singing the pop song I’ve been waiting this ENTIRE SERIES to hear someone sing. No, it’s not “Unbreak My Heart” by Toni Braxton, even though that’s a pretty cool guess. It’s “Stronger” by Kelly Clarkson. Good luck, Danni!

8:03pm: I think the judges saw/heard a different song to me, because they’ve all gone on about how brilliant and wonderful and amazing Danni was and, frankly, she was none of those adjectives! She obviously pushed herself (because that’s what all the judges kept telling me) but she sounded out of tune and not AT ALL Kelly Clarkson-ish, which is almost impossible. But still WHY WOULD JOEL MAKE YOU SING THAT SONG if you aren’t a miniature power-axe of a vocalist like K-Clarks.

8:10pm: Adam the ‘singing postie’ is next up for Team Joel. In rehearsals Joel was working with Adam on his stage presence and his mic work. Just know it was ridiculous and seemed to do the opposite of what a ‘coach’ should do because Adam does not look assisted in any way.

8:13pm: Adam did all the weird shit Joel told him to do, but he looked like he was overthinking the whole thing, not to mention the fact Joel is lousy with his song selection. Adam got lumped with a (probably popular?) song called “Animal” by Neon Trees, when he should have been doing some rousing local favourite. Poor old Adam. He has the smoothest face of any grown man I’ve seen.

8:21pm: Next is Kiyomi who is singing “Upside Down” by Paloma Faith. She looks adorable in a turquoise Alice McCall dress with black applique, and blue pumps with ankle socks. The song was pretty wack and I’m not really into Kiyomi’s voice, but she’s obviously the novelty contender in the mix and she genuinely believes in the ridiculous cartoon-land schtick that she brings to stage and I’m okay with that. I hope she sticks around and keeps entertaining us and making the judges say “quirky” 23 times in five minutes.

8:35pm: Tonight has been a real struggle, with some real lows after the many highs of yesterday’s episode. Last to perform from Team Joel is Michael Paynter. He’s got a ‘top hawk’ (“that’s a flattop and a mohawk combined”, explains my boyfriend) and is singing Daryl Braithwaite’s “The Horses”. I am not a fan of this rendition but it was alright, I GUESS. All the judges loved it, especially Joel who wants to be Michael Paynter’s producer and was all “you know when you have a pet hamster and you love it so much that you hug it and it actually dies?” I missed the rest of it because I had to go find this screen shot: 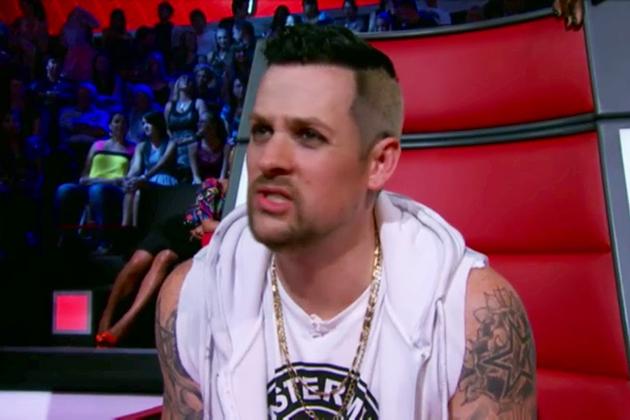