Good grief you guys, it has actually been a year. It was on Logies night exactly one year ago that The Voice Australia invaded our television screens and – dare I say it? – our hearts, and was solely responsible for converting my social life from some occasions that require the shaving of legs to can’t talk, Googling Rachael Leahcar to find out her real surname but if you know how to lie down and live blog at the same time please DM me.

The show and this live blog starts at 6.30pm AEST on the Nine Network. BYO swivel chair.

6:03pm: Okay, so the show hasn’t started yet, but I just remembered that the judging panel’s most hat-immoderate member, Joel Madden, is nominated for a Logie Award tonight. The Logie Award for ‘Most Popular New Male Talent’. I feel that’s something you should be mindful of while enjoying his generous nuanced performance in a sleeveless denim vest.

6:25pm: What colour nail varnish will Seal be wearing tonight? And how many undone buttons will be revealing the gleaming Seal chest? My money’s on fluoro green nails and I dare not put wagers on that chest.

6:30pm: And we begin. Voiceover guy describes Seal as the “undisputed king of soul pop”. LOL. No disputes from me! Delta Goodrem is back with kilograms of hair waterfalling down her torso. Based on three soundbytes new mentor Ricky Martin (replacing Keith Urban) is going to take earnestness to the next level. Highlight of this introduction was this nugget of gold from Joel Madden: “It’s like mining for diamonds. You hear something and boom” [makes shooting gun gesture].

6:37pm: The show starts with the judges doing a performance of “Diamonds” by Rihanna. Get it? Because the contestants need to SHINE BRIGHT LIKE A DIAMOND. Way to demonstrate a primitive grasp of subtlety you guys!

6:39pm: The first hopeful singer dreaming of stardom is teenager Katie Dunstan. She has “done the pubs for years” but probably isn’t old enough to drink in one. “Whoa, she’s skinny!” shouts my fiance just as I was thinking “I wish I looked like her.” You know, like a teenager. She’s singing “Rollerskates” by whoever sings that song. Delta spins first, followed by Joel who is STOKED because he learns that this chick is great looking. Seal and Ricky spin too. It’s the first royal flush of the season! Personally, I think her voice was kind of annoying, like country Joanna Newsom. But people are into those girl singers with weird voices so Katie will probably win the whole show.

6:44pm: Delta kicks off her campaign for the judging panel’s most bravura suck up by telling Katie “I see an artist more than a singer.” Then as Katie tries to decide which of the four she will choose as her mentor Delta adds “Listen to your inner voice.” Ladies and gentlemen, Delta Goodrem is back! Katie ignores Delta’s masturbatory proclamations and opts for the new boy in town, Ricky Martin!

6:51pm: A clarinet- and trumpet-playing mummy’s boy named Nathan Allgood is next. Will he shine bright like a diamond or embarrass his last name?

6:53pm: Nathan has a great croony tone to his voice. Delta spins first, then Ricky. Then Joel. They’ve all got itchy trigger fingers after all that time off. Ricky says he felt joy and sadness in Nathan’s voice, but in the end Nathan succumbs to the desperate arse licking of Delta Goodrem. Delta’s got her first contestant. Also, Joel has said “shit” twice now. Is that even allowed on prime time?

7:00pm: We need to talk about Darren MacMullen‘s new hair style. It looks like he pointed to a picture of Rob Thomas at the height of Matchbox 20’s fame and said “that”.

7:04pm: Next to audition is guy with offensively obvious ‘rock dude’ styling which includes long unwashed hair, tattoos, a paisley shirt and extreme mutton chop sideburns. He lives, breathes and sleeps rock. His name is Simon.

7:06pm: Simon is singing “Ramble On” by Zeppelin and immediately Seal spins around, mainly because he’s a huge fan of the song. Who in their right mind isn’t? Simon actually has a really warm tone to his voice with a subtle soul edge. It isn’t too hardcore ‘rock’ which is nice. Ricky rotates, then Delta and Joel. Delta is glad to have “a true artist on this stage”. Easy Delta. Let’s not use all your ammo at once. Simon now has to decide. “He’s going to go with voice!” I yell at the tv, accidentally calling Seal ‘voice’. This is the first episode of the season and already I’m losing my shit.

7:15pm: Simon chooses Ricky because Ricky’s an entertainer, Simon’s an entertainer. Ricky had a buzz, Simon had a buzz. Then Simon makes a meshing gesture with his hands. Got it. Joel laments the fact no one has picked him. “Everyone hates me!” he moans. “No one hates you,” says Seal condescendingly. “I know that,” Joel replies quickly. Please be enemies.

7:18pm: Uh oh. We have our first officially sob story-accompanied contender. Her name is Celia and she is a country girl with home school length hair and a guitar.

7:19pm: This gal has one of those haunting high tremolos with a catch in her voice. Delta spins around for her straight away. I need to note that Delta has a giant rectangular flesh patch on display tonight. The rest of the judging panel also spin around. Joel tells Celia that he and her were made to work together. He also said she’s an “artist”, also a “true artist” then gets down on his knees. Delta gets involved in the psychological warfare by saying “the choice is yours, you have five judges who love you.” and then gets chosen by Celia. Nicely played. Joel is genuinely cut up about getting rejected. 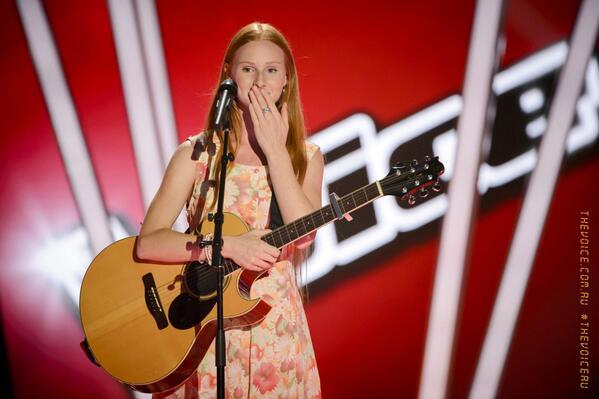 7:31pm: Next is Evan who is deaf in one ear. Rachael Leahcar rang, she wants her calling card back. Evan is singing a pretty but admittedly b-grade version of “How Deep Is Your Love”. No one turned and I would have thrown something at the television if they had. Evan says his fiancee (for whom “he is doing this”) will be bummed because she’s a huge Ricky Martin fan. Ricky says to bring her out and they get their hug on. Mate, I bet Ricky hugs like Santa…

7:35pm: Delta started crying. Probably because the fiancee is a really big fan of Ricky Martin and not her.

7:40pm: Blind auditions are back after an ad break during which Thai delivery was ordered. The next contestant is Lara who is the daughter of some pseudo-familiar man named ‘Fess’ (obviously made up) who was in a band called The Radiators.

7:42pm: But no Lara just yet. Instead a hearty looking chap called Alex is up singing “Blackbird” by The Beatles. He’s got an unusually high and sweet voice for a guy, especially one of such generous size. Seal slaps his spinner button like one slaps an old pal on the back, closely followed by Joel who is all “ooooh!” and “aw yeah!” in response to Alex’s delicate trills.

7:46pm: Is anyone counting the number of times Ricky is saying “your life will change from tonight”.

7:47pm: Joel and Seal put in their bids on why they should be Alex’s mentor. Alex says “I kind of knew who I wanted to choose before I came up here,” then turns to Joel and says “you’re a legend, but I choose Seal.” I’m really not sure how much more rejection Joel can take…

7:53pm: Time for Lara to sing now. She has been having a crisis of confidence but she’s ready to give it all she’s got. She’s doing a genuinely dreadful adult contemporary reworking of Bon Jovi’s “Livin’ On A Prayer”. Delta says “that was a really great rendition of that song!” which is a bald faced lie. None of the judges turned around but Lara seems uplifted by the experience.

7:57pm: Lara gets overcome with a critical case of the vapors when Ricky Martin compliments her voice. Cute. Next?

8:00pm: The next contestant is named Lyric and is the lead singer in a soul group called Brown Sugar. You cannot make that up. Actually, you could make that up, if you were writing a really terrible work of generic chicklit about a dark skinned woman in a soul group.

8:03pm: I am almost 100% certain that ‘Lyric’ is not the name Lyric was anointed with as she emerged from the womb. Only a person named Lyric would name themselves Lyric.

8:05pm: Lyric is singing “Shy Guy” by Diana King and is doing that awesome Jamaican patois rap part. Joel is sold! It’s not long before Delta and Seal spin around too. This is a fantastic song choice. Eventually Ricky hits his button too. It’s on.

8:07pm: All the judges seem pretty keen to have Lyric on their team but Seal and Joel are making the biggest plays here. Joel stands on his chair, raising the roof as the studio audience chants “Joel! Joel! Joel!” And Lyric picks him! Phew. That sulking was getting embarrassing.

8:12pm: Tonight’s episode has wrapped up quite suddenly, due to The Logies about to grace our television screens with its utter terribleness. We did get a preview of the coming episodes of The Voice which includes a handsome stuttering youth. Words cannot describe the emotion. But I’ll try to describe the emotion when the live blog returns tomorrow night. And the night after that. And the night after that. Let’s talk about this episode in the comment section. What did you think about Joel acting like a total pussy? Was Seal’s lack of camp outrageousness disappointing? And, most importantly, how would you describe Darren MacMullen’s new haircut? Good night friends.