Ted Danson and Jane Fonda were arrested overnight at a climate protest in Washington D.C., and the photos of them being led away in zip-tie handcuffs are pure gleeful, chaotic energy. 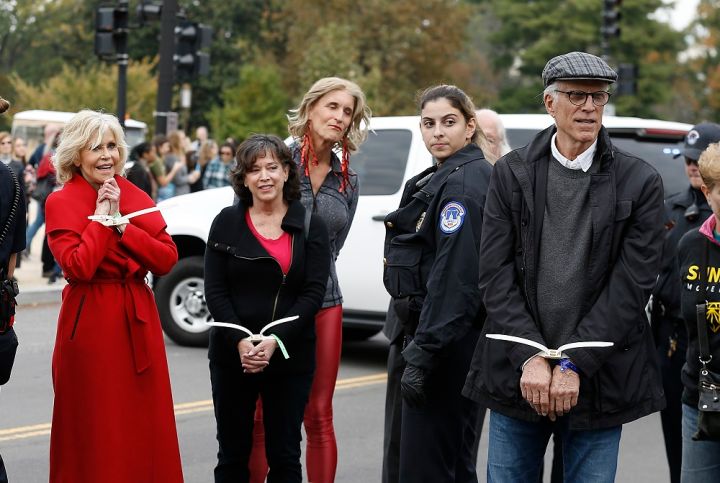 Fonda has become the face of ‘Fire Drill Fridays‘, a weekly climate change protest in D.C., and this is the third consecutive week she has been arrested at the event.

As @GretaThunberg said, “We have to act like our house is on fire, because it is.” @JaneFonda, activists, Indigenous leaders, experts, & community members are answering the alarm sounded by youth to demand action on the climate emergency.

In a recent video, Fonda declared that she has decided to “upend” her life an move to the nation’s capital for four months to focus on climate change.

“We have to behave like our house is on fire, because it is,” she said, adding that people must put pressure on elected officials and “hold their feet to the fire.”

Our movement is rising like the water. Today 31 activists were arrested calling on a #GreenNewDeal, #NoNewFossilFuels, and protection of our oceans. #firedrillfriday ???? pic.twitter.com/FMDOhbgtyG

The Fire Drill Fridays movement is calling for a Green New Deal for the U.S., as well as demanding clean renewable energy by 2030, and no new exploration or drilling for fossil fuels.

U.S. Capitol Police confirmed that Fonda and Ted Danson were among 32 people arrested on on Friday for “unlawfully demonstrating in the intersection of East Capitol and First Streets”.

The theme of this week’s demonstration was ‘Oceans Can’t Wait‘, and at one point, the two veteran actors were seen marching together chanting “get in motion, save the ocean.”

Next week’s protest is themed ‘Women Can’t Wait‘, and Fonda will presumably be there to do it all again.