Taylor Swift (and marketing guy Ryan Reynolds) teased her newly recorded version of Love Story this morning in an ad for a dating site. Surprise, surprise, fans have already spotted a jab at Scooter Braun in it.

This is Taylor Swift we’re talking about, so Swifties know that 99% of what you see in her music videos, posts, and everything in between are there for a reason.

Reynolds, who has his fingers in many pies, debuted Taylor’s new version of Love Story in an ad for Match.

The actor joined the Match Group board of directors back in July. Match Group owns Match.com, Tinder, OKCupid, and Hinge.

“Okay so while my new re-records are NOT done, my friend @VancityReynolds asked me if he could use a snippet of one for a LOLsome commercial he wrote,” Taylor tweeted on Thursday.

“So… here’s a sneak peak of Love Story! Working hard to get the music to you soon!”

As an aside, I swear Ryan Reynolds posts the most random shit every couple of months.

Anywho, it didn’t take long for fans to spot the very obvious dig at Scooter.

After all, the music executive is the reason why Taylor is re-recording her first six albums: Taylor Swift, Fearless, Speak Now, Red, 1989 and reputation.

In the ad, Satan falls madly in love with a woman named… 2020, and together they enjoy the spoils of this horrible, heinous year. At one point, they pause by a literal dumpster (on) fire to take a selfie.

Behind them, next to another dumpster, is a fallen scooter and the number six. 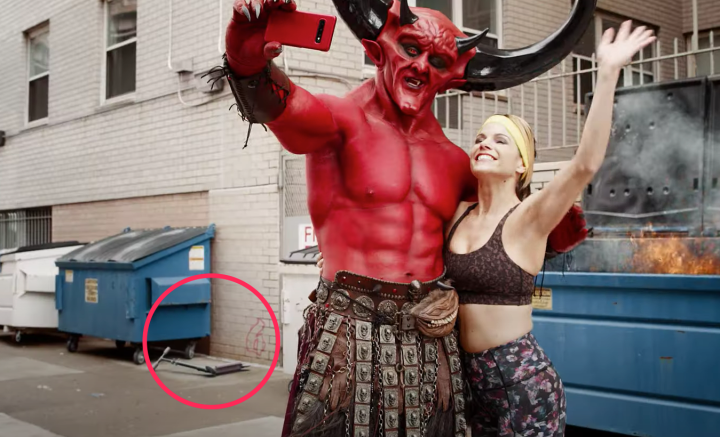 I’m chortling over the scooter being literal trash, and the Swifties are too.

???? | She really did THAT… fallen ???? next to a graffitied number 6️⃣ representing her first six albums she is currently re-recording #2020LoveStory pic.twitter.com/pMJK6yKnMp

There’s a 6 behind the scooter… I’M LIVING pic.twitter.com/MLO0byg3lS

NOT THE FALLEN SCOOTER ???? THIS IS WHY I LOVE TAYLOR SWIFT #2020LoveStory pic.twitter.com/2XeMrjRppp

taylor swift really put a fallen scooter and the number 6 next to the trash can. i love her so much pic.twitter.com/XuKulWjPEK

Scooter and literal scooter aside, Taylor recently released Folklore: The Long Pond Studio Sessions on Disney+. The concert film gives an intimate glimpse into Taylor’s writing process with collaborators Aaron Dessner and Jack Antonoff on Folklore, and recording her music in quarantine.

She also confirmed her mysterious cowriter on Betty and the Grammy-nominated song Exile is her partner Joe Alwyn.

“Joe plays piano beautifully, and he’s always just playing and making things up and kind of creating things,” she said.