Just Gonna Say It: The Moon Landing Was Fake

This is not a new theory, of course. It’s existed for a very long time – I’d argue since the “moon landing” happened, in fact. But given there’s a very popular film out right now ABOUT the “moon landing”, the topic is back up for discussion – that, and how NASA are saying they’re going “back” to the moon in 2024.

I am not an expert on the moon landing, or on space. In fact, I fucking hate space!

Space is gross and scary. I don’t care for it. So this probably fuels my believe that the moon landing was fake because if it was real, this opens up a world of pain for me – like having to pretend I enjoy going on jaunts to the moon or some shit when I’m 60.

Anyway I’ll tell you right fucking now that I did not spend months researching this article, this is just my opinion and the scraps of info I have absorbed via the internet over time. I checked some shit on Wikipedia though, ok? I MILDLY TRIED.

Let’s get into it, shall we?

Do not sit there and tell me this looks anywhere near legit, you guys. This looks like it was filmed in a Hollywood studio, which is exactly what the conspiracy theory alleges took place.

A fun Aussie argument comes from Perth, where a woman with the pseudonym Una Ronald (amazing pseudonym imo) said she saw a Coke bottle roll across the corner of the screen during the live broadcast. She said several letters appeared in the West Australian that also mentioned this bottle, but these have never been sourced. OR WERE THEY COVERED UP, HUH? HUH?

There’s a few dud theories around – that Stanley Kubrick was involved (TL;DR – he made 2001 and everyone thought maybe given his amazing special effects, he was involved. Turns out it’s unlikely he was), that there are no stars (apparently this is normal)…

But it’s still mildly weird, like how they used a live broadcast from the camera mounted in the Apollo 11 module, but never did so again. For the Apollo 12 landing for example, only official photos were released after the voyage.

Of course, you *could* say it was just too expensive to do again. But to me, an enlightened being, it’s fucking suss is what it is. 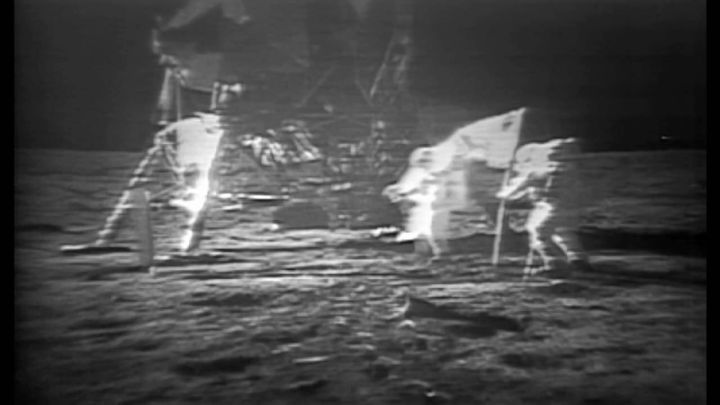 Okay, so one of the fundamental arguments against the moon landing is that the flag flaps in some non-existent wind in the live stream. The theory goes that either a fan on the set (to cool the actors in their heavy space suits) made it flap, or a breeze.

Now, NASA “debunked” this by saying that the flag flapped because the astronauts bumped it while sticking it into the Moon.

Hmmm… I don’t buy it. The flag happened to imitate blowing in the wind because one of the dudes bumped it? More like the WIND blew it in the wind. The wind on EARTH.

3. The Transmission Was Sketch

A lot of the conspiracy hinges on Australia, can you believe. Basically, *our* Parkes observatory was, for weeks, billed as the site where the transmission would be received. But 5 hours before it happened they were told to stand down.

Now, there’s a lot of TV-talk in all of this – the argument here is that timings for the moonwalk changed, hence the location that received transmission changed. Then there’s all this stuff about how Parkes did get some of the transmission or something? And Australia saw shit a few secs before the rest of the world? I don’t know, it got far too TV-tech for me.

But it does seem a little suss that just hours before the transmission, NASA were like nah Parkes you’re off, we’re doing it.

We all know about the Space Race – the USSR and the USA battling it out to be first in space across everything, blah blah. Obviously, big coup for the USA to land on the moon first. And they did actually go back several times to really hammer it home that they technically won that damn Space Race.

But there’s an argument that their technology just wasn’t up to scratch for such a journey. The USSR got pretty much every top gong in space before this shit went down (first living creature, first man, first woman in space, plus first spacewalk and first man-made satellite in orbit… also s/o to USSR for sending a dude and a gal into space yeaaaah babey with that equality! I know nothing else about their politics don’t come for me!). Kinda weird that they had all that, then the US just casually makes it to the moon and fucking walk on it? Sure, Jan.

Look there’s arguments against this but they are boring and kind of sound like suck-babies crying over the USSR being good at shit, I CBF covering them off. But I think we can all agree (no) that it’s weird the States were coming a sad second forEVER until the moon.

It’s very convenient, as my Editor just said to me as I Pepe Silvia’d this bitch to her face.

A little TOO convenient, no?

Some sort of bonkers-sounding TV program from Fox Entertainment Group apparently drew some connections between the deaths of 12 folks related to the crewed spaceflight program, and this conspiracy.

It’s certainly weird that 12 people died who were in some way associated with the program. But they did all (but one) die before the 1969 moon landing.

That being said – does it matter? Maybe they were threatening to leak info or whatever! I don’t know! It’s still weird that TWELVE PEOPLE DIED from one program! Except maybe they were loosely connected. Who knows. I mean some people know and I could know if I dedicated hours of my time to discovering the truth, which I frankly will not do.

There’s missing blueprints, missing development drawings, and most interestingly – missing footage. This is legit – a shitload of video from the moon landing was… TAPED OVER. I am not fucking with you, senior engineer Dick Nafzger, the guy in charge of the live TV recordings during the Apollo mission said after a three-year search that the “inescapable conclusion” was about 45 tapes of Apollo 11 video were erased and re-used.

I’m sorry, that sounds like bullshit to me – you’re telling me (and this is across MULTIPLE tracking stations that recorded stuff, btw) that all these people were like “oh well, delet” on a bunch of Apollo 11 moon landing footage?

5. Just In General, The USA Loves Itself Sick

Here’s a personal theory based on nothing. Sure, the USA walk on the moon as a big fuck you to Russia. And then they do it again and again, I think like five times they did it.

But then they… stopped? Moon landings ran until 1972, and since there hasn’t been any since. Considering the 80s were a primo time for bad USSR/US relations, the Cold War very much continuing through the 70s and 80s. I find it hard to believe the USA wouldn’t be rubbing this shit constantly into the USSR’s face, tbh.

Not to mention the 80s and 90s were this huge period of excess and WOW look at how SUCCESSFUL the USA is blah blah? And just in general, America is a bit like “my dick is bigger than yours”?

Just seems strange that they haven’t been flying back to stomp all over that bitch every decade.

Anyway! There’s obviously a lot of take-downs on this – NASA even paid some guy like $15K (!!!) JUST to take down the moon landing conspiracy stuff. I can absolutely concede that as fun and zesty as this conspiracy is, there aren’t a lot of strong facts to properly back it. That’s why it’s a conspiracy! And also why America hasn’t like, been taken to the UN or something. I actually don’t think the UN would get involved but you know. Whoever would get involved if America was fucking lying about the moon landing all this time.

Anyway, go forth and roast me bc I know you will. I SAID WHAT I SAID.

READ MORE
Just Gonna Say It: If You Don't Shower Before Bed There Is No Hope For Your Soul