You can actually pinpoint the second in tonight’s episode of MKR when Ash and Bek‘s hearts rip in half – the fish main has turned to an oily, buttery disaster in the frying pan, the profiteroles have dried out before they’re even in the bloody oven, and it suddenly seems to dawn on them that they’re headed for [DRAMATIC VOICE-OVER] the lowest scores in My Kitchen Rules history.

Half the fun of writing these recaps is taking the piss out of the drama on screen, but tonight’s episode is such an all-round shitshow that I don’t even want to do that to poor Ash and Bek. I really just want to have them round to my house, chuck a couple of conciliatory glasses of sauv blanc in their hands and tell them ‘guys, it’s okay, it’s all over now and the bad Pete and Manu can’t hurt you anymore.’ 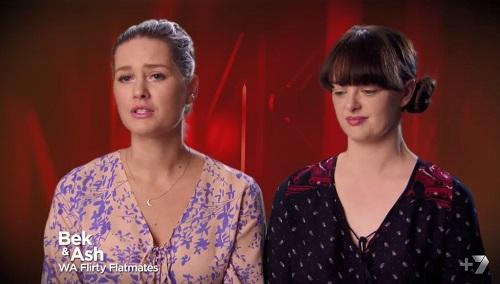 I’m a bit of a My Kitchen Rules stan – NOT THAT YOU’D POSSIBLY HAVE GUESSED THIS ALREADY – and I’m pretty sure that, up to this point, David and Corinne were the contestants with the lowest ever score. The show set them up as spiteful super-villains, so it was a giddy rush of schadenfreude to see them serve up vomit-like corn chowder and soggy chocolate cake, before exiting the competition, sailor hats between their legs.

Ash and Bek, on the other hand, are the kind of bright, bubbly besties who you’d think would make it past the first round. Katy Perry songs seem to follow them around wherever they go – not just on the soundtrack of the show, but I suspect in real life as well. MKR spent all of last week setting up a cute flirtation between Bek and sexy lumberjack Kyle, and it really seemed like that’s where her storyline was headed, but then BAM.

Things are bad pretty much right from the get-go. After driving well out of their way to get fish – seriously, MKR producers get a real kick out of making contestants drive forty five-plus minutes for a single ingredient – they’re running behind time and frantically playing catch-up. Their instant restaurant is cute as hell, and they’ve decked it out to look like a music festival, complete with lanyards as menus, but it’s the one successful thing they’ll pull off all night. 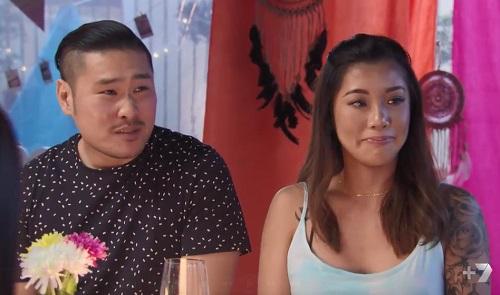 When the guests rock up, David and Betty are still on the bottom of the leaderboard, and from the minute they sit down, they are positively dripping with schemes and strategies and are prepared to harshly critique every dish that’s put in front of them. There’s nothing like the threat of a little strategic scoring to bring out the worst in MKR contestants, but by the time entrees are served, it’s pretty clear that this won’t be necessary.

The cases for Bek and Ash’s vegetable tarts have shrunk in the oven, and they arrive at the table laden with so much garlic that even poor daddy bear Manu is struggling. “It’s killed your tart,” he says, and yes, that sentence sounds even more crushing when you say it in a lovely, mellifluous French accent. Try it out for yourself, I’ll wait right here. 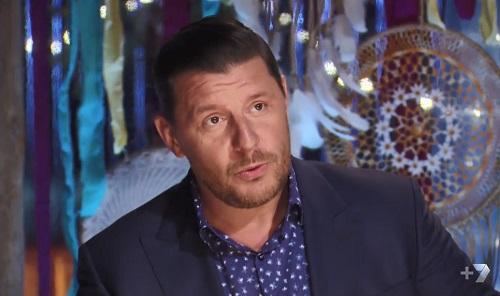 Bek and Ash retreat to the kitchen to work on their main, and after an hour and a half, the infamous countdown appears on the screen, to hammer home the level of boredom, hunger, frustration and existential angst around the table. I mean, to be fair, when you’re sitting around in the pergola of a rented house for eight hours, making forced small-talk about tart cases while Pete and Manu fuck off back to their trailers, you’re probably going to be feeling pretty ratty. Nonetheless, it’s obvious at this point that things are not going well.

After coating her fish in way too much flour, Ash attempts to fry it in a mixture of butter and oil and starts to lose it because the temperature of the pan is too high. Rather than turn it down, or try and salvage the remaining fish by baking it or something like that, she continues fussing over the too-hot pan as it spits oil in her direction. There’s not enough fancy walnut oil for Bek’s fancy walnut oil dressing, and when the main finally limps its way to the table, nobody’s impressed.

Dessert is profiteroles, but the pastry has dried out in the oven, the custard is lumpy and so few are actually salvageable that the guests will only be getting one each. The chocolate topping is the only redeemable element on the dish, and everyone mentions how much they like it, because they feel genuinely bad for Bek and Ash at this point and want to think of at least one nice thing to say.

For all their bluster about strategic scoring, David and Betty give the girls a four out of ten, which is actually one of the highest marks of the night. When critiquing individual dishes, Pete and Manu’s scores mostly hover around one out of ten, and when all’s said and done, Bek and Ash are on a score of 26/110. Yup, that’s one point lower than David and Corinne’s 27/110, and is enough to earn them the My Kitchen Rules wooden spoon.

That leaves wood-chopping, bear-wrestling Kyle and his mate (whose name I forget, sorry) left to cook, as well as Amy and Tyson. Tyson is definitely being groomed as the villain of the current instant restaurant round, but I don’t really know what to make of him yet. He’s an aspiring restaurateur, and has talked himself up as a bit of a culinary snob, although his critiques mostly consist of ‘I like food that is good’ and ‘this food is not good’ and ‘my food is up to a more good-er standard than this garbage food’. 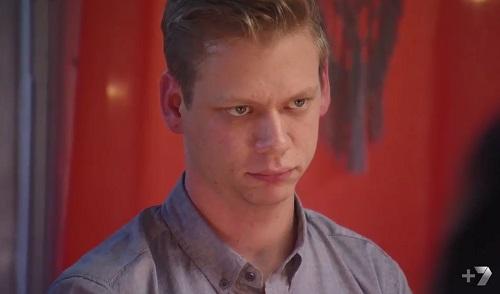 Seven has been calling Tyson ‘Angry Man’ in all its promos this year, and he himself seems very keen to let the other contestants know that he has some serious anger management issues. He explains that, when he gets really mad, his neck puffs up, his eyes bug out and he has been known to flip tables. This is probably foreshadowing for something but I can’t imagine what.

Teresa Giudice from The Real Housewives Of New Jersey is reality TV’s foremost table-flipper – the Teresa v Danielle prostitution whore freak-out from season one is still the absolute gold standard – and frankly, Tyson has a long way to go if he wants to attain that level of pure, unfiltered rage. Let’s wait and see what he brings to the, um, table.