MASTERCHEF DRAMA: We Need To Talk About Matt Preston’s Pants

PREVIOUSLY ON MASTERCHEF AUSTRALIA: Sashi used one of his pins. That’s all you need to know about what’s happened since the last time I purposefully raised my blood pressure by covering this show. The one good and correct MasterChef-related thing that’s actually happened in weeks was Sashi finally having to put on a black apron and use one of his Immunity Pins.

Except they did that thing where they dragged out his decision to use for 10 minutes where he umm’d and ahh’d about it instead of strolling straight into the kitchen and slapping it down on the table because that is literally the easiest decision in the world.

I’m honestly shocked he even bothered to wear all black that day.

Immunity Challenge, Sweet Week, Ben, Kristen, Reece, and Chloe are all up for it, etc, etc, etc.

None of that matters. 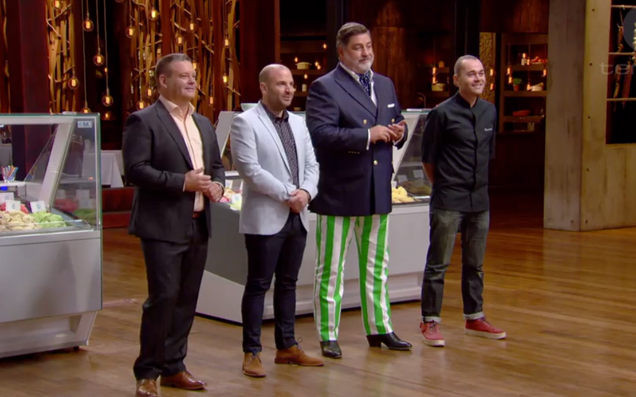 The eye is, quite rightly, immediately drawn to those pants. And to be sure, they are the focal point of the whole shebang.

Hell, social media had a field day with them as soon as the episode went to air.

Possible inspiration for Matt's pants:
– green and white candy canes
– a circus tent
– oh God, who knows? Why does he do this to us?#MasterChefAU

Matt, I’ve scored your pants 3 out of 10 #masterchefau

If @MattsCravat pants were part of the taste test – what flavor would they be? #MasterChefAU

But the cold, hard reality of the outfit is that the pants don’t get anywhere near the same amount of recognition without the rest of its accompaniments; the outfit is the sum of its parts; every piece of it works in direct harmony and opposition with one another; it is an MC Escher drawing, a trick of perspective, simultaneously explosions at an op-shop and a Play Doh factory.

It requires – nay, demands – surgical dissection. Beginning with the shoes. 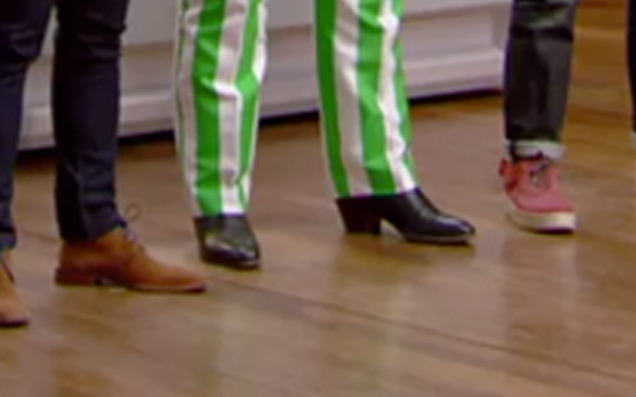 By themselves they are a marvel of an item, but in comparison to the footwear of his compatriots they become something else entirely.

To Preston’s left, Shannon Bennett sports kicks that are less “actual functional footwear” as they are more “the beak of a diseased goose.”

To his right, George Calombaris – who should be in jail – wears what appears to be totally flat shoes. Though a closer inspection suggests that he’s stuffed those clod hoppers with so many lifts that his feet have to be lotus gaited into the neck of the boot only.

Matt Preston is 6’3″. A flat-footed George Calombaris absolutely does not reach the height of Preston’s chin.

And that makes the decision to wear Cuban heels ever wilder; a true alpha move. If George wants to flit the set about pretending to sniff the rare air of the tall, then Matt Preston can swan about in fuck me pumps like he could swat shots from Dikembe Mutombo.

Look at George trying to crane up to the suddenly-taller Matt. He is furious.

“Ha ha ha yeah, what’s it like up there fellow tall person?” 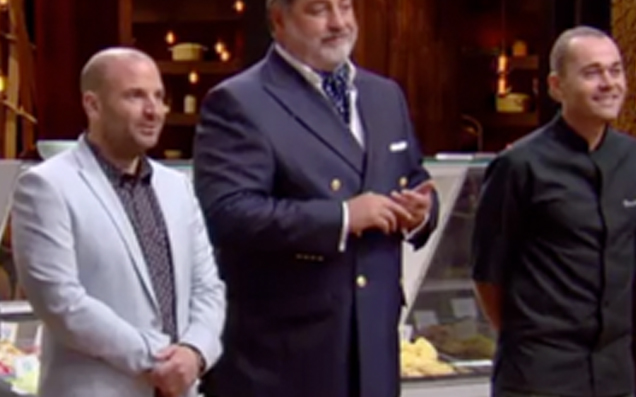 It’s the gold buttons on this bad boy that set it apart from the rest of Matt’s pack; deftly straddling the line between “regular coat” and “bloke who takes your luggage for you at a hotel far too fancy for you to actually be in.”

The kind of jacket you’d expect to see an old boy wear on ANZAC Day while spilling a shandy down his slacks; he hasn’t had the muscle mass to fit into properly for 30 years now, and the rack of medals on his lapel is threatening to send the whole thing to the floor.

The kind of jacket you’d expect to see on an off-brand celebrity wax figure tourist trap, on a model that they claim is David Letterman, but really looks more like they tossed a CPR dummy in a convection oven on high for 5 minutes.

The kind of jacket you’d find at a Savers and you’d think real hard about buying it, but you wind up leaving it there because like… you’re not spending $18 on it. That’s ridiculous.

And lastly, the pants. Sweet merciful fuck, the PANTS. 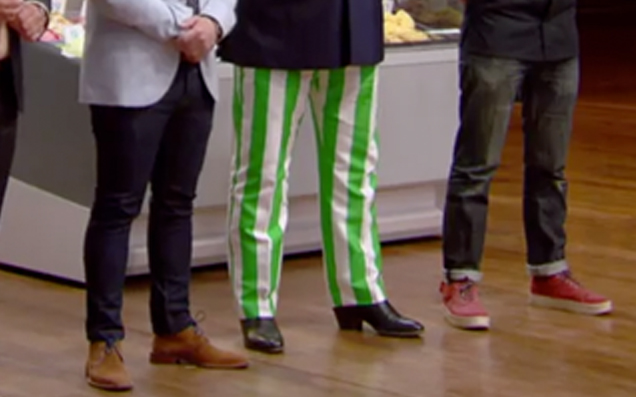 So many questions. So, so many.

Does he have a full suit of this? Did he attempt to wear it on set before a producer made up some bullshit about “strobing” just to prevent him from going on national TV looking like the Joker and the Ridler fucked and somehow made a kid? Do they have a smell? Why can I smell that picture?

Matt Preston full on pulled on those Melbourne Cup lookin’-ass pants and strode into the kitchen like he didn’t give a fuck.

He walked in there, legs going full Peppermint Patty, and made everyone lose their goddamned minds.

Kristen (who lost the Immunity Challenge, BTW), completely forgot what the word “chocolate” was and got hypno-toaded into over-liming her dish, such is the power of those pants.

NEXT TIME: Everyone wears ordinary pants and I hate it.