Thanks to several pro chefs sniffing, folding their arms, and offering up variations of “it’s fine” in terms of feedback, we lost dear, sweet Jess and have finally whittled the field down to an even three.

With this being the last hurdle standing between the cooks and a direct shot at the coveted ceremonial Silver Prop Plate, the stakes are incredibly high. And, as such, the challenge has been set: A full service – main and dessert – for the only group of people mentally strong enough to watch this godforsaken show physically torture these three poor idiots before gleefully critiquing the food they made for them. Hell yeah, it’s a room full of ex-MasterChef contestants. You absolute beauty.

Being that there’s three people left and these episodes are finally becoming actually watchable instead of jumbled messes, we can pick things apart logically based on how each of the three boys fared. Observe.

THE THING BEN DID

Ben, bless his heart, is cooking on all cylinders right now. It’s just that all of those cylinders are telling him to cook fish and a puree with a single carrot.

Going back to the well he’s been mercilessly dragging dry for the past few episodes, Ben plates up a main of fish with things that you know is cooked well because he’s like that one kid who figured out a weird arm motion that automatically gives him a strike in Wii Bowling and so now he’s just spamming that all the way to a 300.

In fact the hardest part about Ben’s night in the semi-final was actually describing what his main course was going to be to Shannon Bennett, who spent the entire episode swanning around the kitchen making a massive asshole of himself.

Though to be fair, listening to Ben talk about his dish was a challenge in and of itself.

“Yeah it’s gonna be a beautiful, ah… pretty much a…. sauce… and that’ll be… I reckon… brown, with a beautiful uh… fish, a bit of fish.“

Ben canters so easily to the finish line that he even has time to pause and wave to his adoring fans up on the gantry.

Who is now waltzing his way into the Grand Final, virtually unchallenged.

Un-fucken-real stuff. Whoever tells you that MasterChef is anything other than a dream factory has got rocks in their heads.

READ MORE
MASTERCHEF DRAMA: Sashi Actually Fucked Something Up For Once

THAT THING SASHI DID

If the Channel Ten broadcasting towers suddenly collapsed six minutes into the episode and they never aired MasterChef ever again, I still could’ve told you what Sashi cooked with absolute certainty.

Unlike Ben – and unlike his usual tactic of rolling things in turmeric and calling it a day – Sashi’s semi-final hits several snags thanks to a weird competition parameter where suddenly the judges want something super-refined now, after literally jizzing rainbows over any old slop for the entire series up until now.

Regardless, it’s Sashi’s portioning that gets him into trouble initially. I’ll rail against Shannon Bennett and the idiot judges as much as the next bloke, but even I would flip shit if I got a chicken dish that was just one drumstick or thigh per person.

My stomach to my brain when I get to the bottom of a 1 pint tub of ice cream.

Despite some chicken the judges describe as “a bit homely” – they crack stiffies over a fucken thick soup and yet now they’re drawing the line I am LOSING MY MIND OVER HERE – Sashi also manages to drag himself across the line and into the final, because there simply wasn’t going to be any version of this series that didn’t feature Sashi in the top two. Not in this universe, or in any other.

He even heats plates up in a microwave and yet still everything’s fine, which results in one of the most Keystone Cops moments in MasterChef history.

Cue: A 2-minute montage of Sashi scrambling around the kitchen in fast forward set to Yakkity Sax.

Which, quite unfortunately, just leaves us with…

THE THING KHANH DID

On any other day Khanh probably would’ve raised up and beat the dishes Sashi put up six ways till Sunday.

Not on this day.

In fact there’s probably no better representation of how Khanh’s entire semi-final went than this one glorious shot of everything being on fire while his back is turned.

‘Course none of this is helped in the slightest by Shannon Bennett and his shithead ponytail-headed, lookin’-like-he’s-always-two-bong-rips-short-of-packing-up-and-following-311-on-tour-all-summer ass making things incredibly difficult, just by floating around and chirping.

I mean, how on earth is Khanh supposed to put up a coherent dish when one minute he’s in his ear all like…

…and then nek minnit:

Mate, piss off outta there and tend to the extensive collection of shark tooth necklaces you clearly own and just let poor Khanh do his thing.

Alas, it’s not to be. Khanh’s struggles were simply not enough to get him over the line, and thus the 2018 MasterChef Australia Grand Finale will be contested between Ben and Sashi.

Congratulations to our Top 2 for 2018! #MasterChefAU Grand Finale, 7.30 tomorrow on TEN

Cop the murderer’s row of former contestants that rocked to fill seats on last night’s episode, why don’t you! 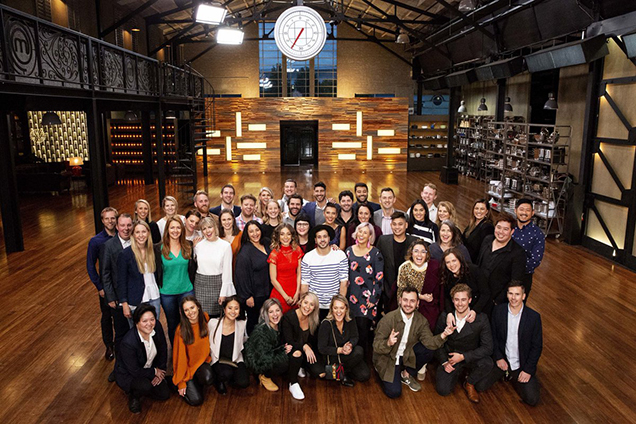 All the old favourites!

Big shout out to the homies Jess Arnott, Alice Zavslasky, and Harry Foster in there.

And also a long-awaited welcome back to Arum Nixon, who finished *checks notes* fifth in… last year’s series?

That can’t be right.

I could’ve sworn that guy got eliminated in 18th place in like… season four.

Even though there’s 60 former contestants there spanning all previous seasons of the show, notable is the absence of 61. 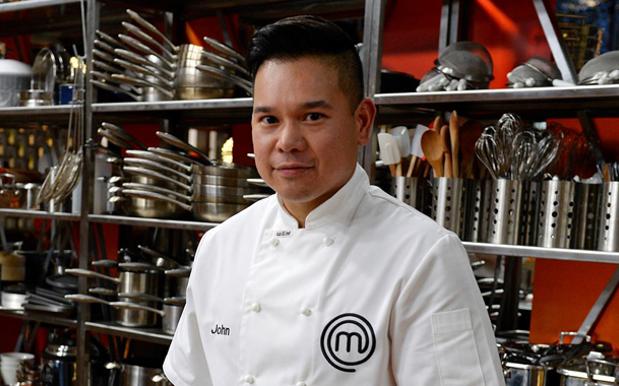 I can’t tell you how I know, but I can tell you that he was nearby somewhere when they shot this.

I can sense it.

It’s whispering in the air.

NEXT TIME: We finally get to the fireworks factory. It’s the MasterChef Australia 2018 finale, baby! We’re nearly there!