PREVIOUSLY ON MASTERCHEF AUSTRALIA: A bunch of would-be cooks with partners and/or families rich enough that they could simply leave them for four months and everything would be fine gathered in a converted barn at the Melbourne Showgrounds to provide the area with enough tax revenue to justify the local council not selling the land off for high-rise redevelopment for another year.

Guest celebrity chefs were ferried in from around the world at exorbitant cost, providing negligible ratings boosts for a network enduring enormous financial strain.

Let’s bloody do this.

The 2014 Richmond Football Club had absolutely no business being in the finals that year. By Round 14 of the season, they were sporting a win-loss record of 3-10. But then, unbelievably, the side managed to rattle off 9 consecutive wins to end the season, clawing their way into a remarkable berth in the finals.

At which point they got the absolute heaving shit beaten out of them.

Ben Borscht is the MasterChef equivalent of the 2014 Richmond Football Club.

An endearing if not thoroughly unprepared cook who caught fire midway through the season and somehow hauled himself up to an wild and wholly unlikely spot in the grand finale, only to have the piss stripped clean from his own body once he got there.

There’s no beating around the bush on this one: Ben got absolutely fucken trounced last night.

He got battered harder than his own fish.

He straight-up shat the bed so hard that it’s a complete mystery as to how the show believably shot an ending where he won just to keep the result from leaking.

READ MORE
MASTERCHEF DRAMA: Sashi Actually Fucked Something Up For Once

Perhaps it was the pressure of the Grand Final getting to him. Perhaps his buff from mouth kissing Gordon Ramsay or whatever had finally worn off. Perhaps he got mildly hypnotised by the glint of light bouncing off the glorious ceremonial Silver Prop Plate™.

10 years in and they still haven’t figured out how to shoot that damned thing properly.

Whatever it was, Ben’s problems began about as soon as round one began.

Forgoing the usual finale setup of three rounds, last night’s first round combined the usual first and second round offerings by forcing both Ben and Sashi to cook two courses – a starter and a main – in 90 minutes.

Ben’s brain summarily caved in and he decided not only to shell crabs for his starter but bury them in a dish that could only really be described as White Slop with Green Slop garnished with Cucumber Slice and Jizzy Fish Balls.

Ahh yes. A lovely pile of mush. Perfect for a restaurant exclusively serving people without teeth.

Frankly, alarm bells should’ve begun ringing loudly when Ben started drowning his Green Slop with Tobasco in the same way that I drown any food with Tobasco when I am very, very hungover.

Key hangover recovery tip? Hot sauce on anything. It won’t help you with the hangover whatsoever, but spicy food reminds the body how to feel anything other than pain.

Sashi, meanwhile, sticks to his regularly scheduled programme of “good curry” which, as we’ve learned time and time again throughout this season, is to the judges as two morning cones and a can of Mother is to any 21-year-old labourer named “Simmo.” Get it into them.

The scoring of the dishes paints a very stark tale of how the rest of this ball-achingly long episode is going to go.

Remarkably, things only went from bad to worse.

After spending 89 minutes of a 90 minute challenge shelling crab, Ben suddenly realises he has precious little time left to prepare a main, so his poor brain goes into overload.

All his instincts can do is to spin two wheels in his head – one marked “FISH” the other marked “THINGS” – and while in challenges past he’s hit the jackpot on those badboys, this time he craps out when they turn up “BATTERED WHITING” and “PEAS”.

That’s all he cooks.

For a main course.

In a MasterChef Grand Finale challenge.

Fish, with thing. Singular. One other thing.

To make matters worse, while he attempts to reef it out of the deep frier, one of the fillets clings onto the basket for dear life.

Luckily however Ben does the right thing by serving the underdone fish to George; a piece of fish with withheld elements representing all the wages he withheld from employees. It’s the last recap for the year so you bet your ass I’m wearing the CONTROVERSY HELMET, folks.

The scores, once again, speak for themselves.

“Yes good thanks yourself?”

Seriously, look at the bloody scoreboard after round one. 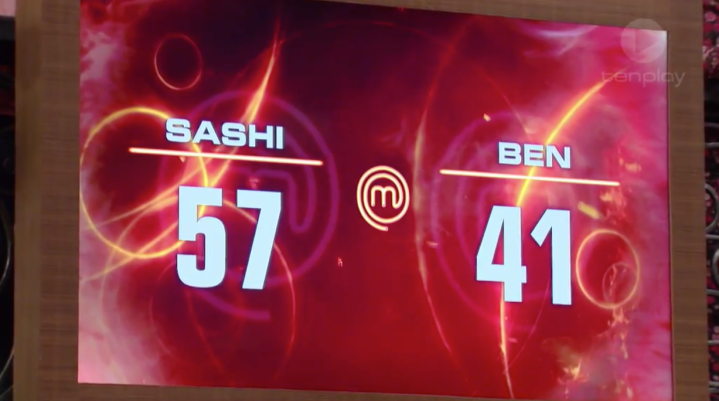 This was a pantsing. An utter flogging. A complete and utter annihilation.

It’s such an all encompassing battering that I swear to christ the producers called an audible on the legendary and usually terrifying Final Dessert challenge.

With Sashi 16 points ahead, in walks the bald dumbass of the culinary world, Heston Blumenthal, fresh from getting stuck into his production rider which apparently consisted solely of “cocaine and also more cocaine.”

In years past Heston has brought in absurd creations that have literally put his own chefs into psychiatric care before, this year he brought along… this.

Fucken… what is that. What even is that.

I don’t care what kind of molecular ergonometric bullshit has been shoved into that. You cannot – you CANNOT – tell me that is anything other than Hellspawn Blue Man Group having a tug over some meringue and ice cream. It’s as simple as that.

And yet somehow that thing takes a staggering five and a half hours to put together.

It’s such a long, arduous, pointless cook that most of the Gantry completely loses interest, even when Sashi makes his one and only mistake of the whole day.

How’s Super Meat Boy Tim there. Could not give a SHIT.

This whole thing has been so completely academic since the round one debacle that it’s not even remotely interesting. In fact the only actually good thing about the dessert round is Ben’s very powerful Dad Pete pulling the ultimate Dad move of pretending to understand something that he very clearly has no fucking clue about.

Ahh yeah, and then the coriander yoghurt goes with the… plughole lookin’ thing, and that goes on top of the whatsitsname, which… yep, with the ah… the thingo, that thing. Yeah I get it now.

Ben, poor ole’ Ben, knows he’s cooked himself so hard that there’s a point around four and a half hours in where he completely checks out and begins throwing scraps to the masses, because if he’s gonna go down in flames he might as well feed everyone.

If that throw actually made it all the way up to the Gantry I will eat my godforsaken keyboard. Looks like he stared Aldo dead in the eye and piffed it into the fridge door.

And ultimately, that’s it for this year. Despite Ben’s being clearly the better of the two, the judges slap blanket 9s on everyone, giving Sashi a total score of 93 out of 100 – the largest Grand Finale score in MasterChef history – and confirming the thing anyone with half a brain should’ve realised from about episode ten.

Sashi was always going to win.

It was never going to be anything different.

The episode starts, the episode ends, Sashi walks out the winner.

Was it really ever in doubt?

NEXT TIME: Nothing. That’s it. Australian Survivor starts tonight, which is a far superior show. Seriously, if you’re not keen to see Russell Hantz turn Commando Steve into a psychological puddle then you’ve honestly got rocks in your head.

See you next year, mates.