“I am seeking help to try and figure out new ways to combat my emotions and how to deal with this negativity.”

Jackson concluded by addressing Olivia directly, who sat beside him as he gave his whole spiel.

“It has been shit, but I’m lucky to have Liv by my side and she has been nothing but an angel throughout it all,” he said.

The controversial MAFS star then said they’re “hanging in there” and have no plans to end their relationship, despite recent rumours.

“We’re staying together. We’ve got a lot of healing to do, but ultimately, we love each other and it’s not worth throwing it away,” she said.

The caption read: “Appreciating everyone’s love and support during this hard time. Lots of love, Liv and Jack xx.”

It comes after Olivia Frazer’s first Instagram statement about the absolute shitstorm that has ensued.

Taking to her IG Stories, Olivia told her followers that she’s “heartbroken” and “so embarrassed.”

“Hi everyone. Thank you so much for the love and support during this horrendous time,” she began.

“I’ve seen so many beautiful messages and people checking and I just wanted to let you know that although I’m so heartbroken and so embarrassed, I am okay.” 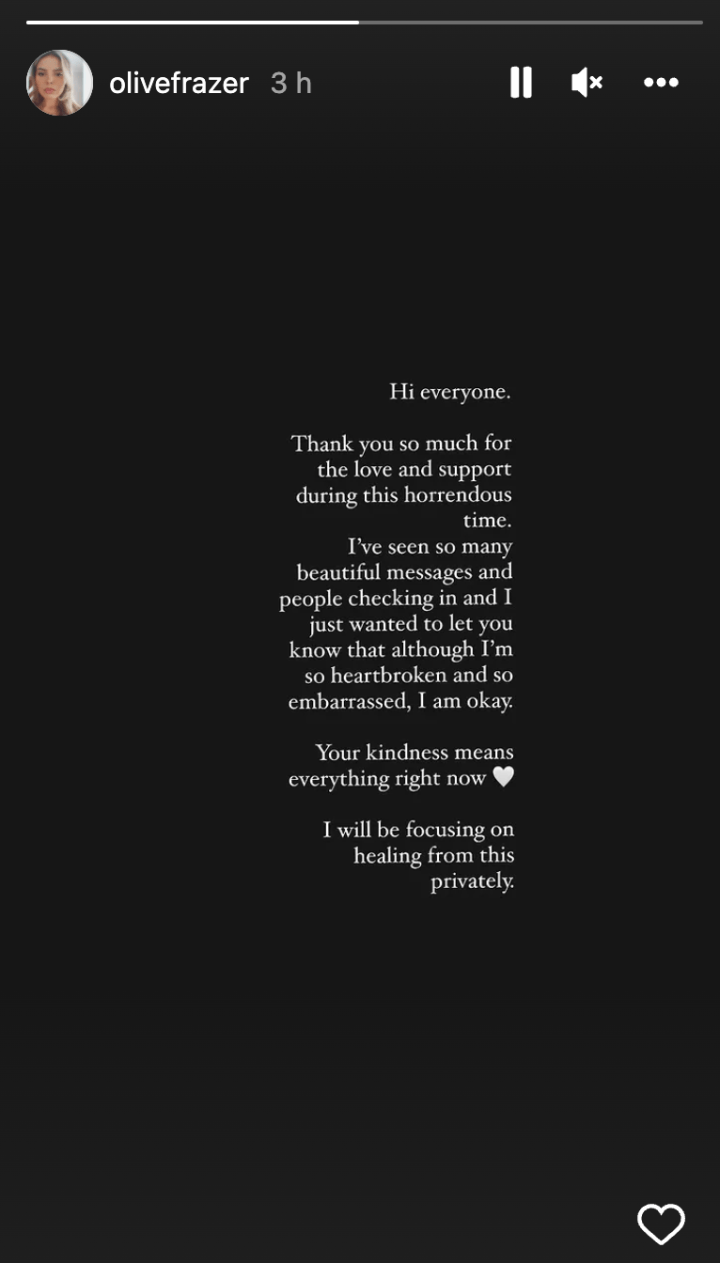 She added: “Your kindness means everything right now. I will be focusing on healing from this privately.”

Yesterday Han, the gal Jackson macked on with at a nightclub, gave an interview to The Kyle and Jackie O Show in which she slammed rumours that the kiss video was a “publicity stunt.”

“I did know of him. Obviously I’ve never watched all the MAFS stuff, [but] I’ve seen some clips here and there,” she said.

“But we didn’t orchestrate it or anything like that. As any young adult would when they’re going out, if you see your friend kiss someone, usually you just take a photo and the next morning you’re like, ‘Oh, look at this, look what you did!’ You know what I mean?

The 20-year-old also revealed that the pair exchanged numbers on the night. Fkn yikes.

“It was just a kiss, but I did get his number at the end of the night,” she told the radio hosts.

ICYMI: A video of Jackson macking on with TikToker Han recently surfaced online and resulted in a public shitstorm.

Have a peek at the vid below, if you can stomach it: