CONTENT WARNING: This article discusses self-harm, suicide and drug abuse. There's also a fair amount of blood in the footage so only read on if you can handle the sight of blood.

Machine Gun Kelly has shared footage from a disturbing performance in which he smashed a glass on his face mid-performance, causing him to bleed profusely.

E! News reported that during an after-party for his concert in New York City, the rapper smashed a champagne flute on his forehead and shouted: “Bro, I don’t give a shit!”

The musician shared the footage on his Instagram Story, writing: “And this is when things turned.”

In subsequent videos, his face is gushing with blood which was bound to happen, really.

The footage is still active on his Instagram Story but just warning you, it’s rather unnerving. 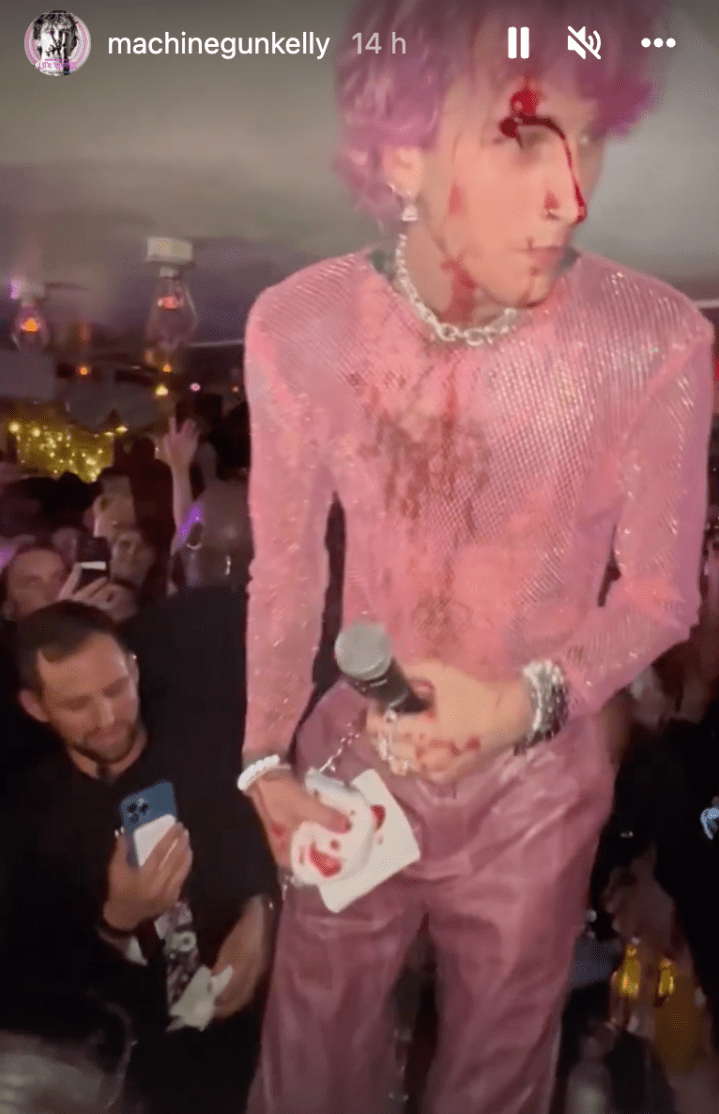 The bloke even made a grid post about the whole thing, writing: “NYC you’re my bloody valentine.”

The whole thing was pretty alarming. Even his fiancée Megan Fox appeared shocked after he started bleeding, as spotted by a fan on TikTok:

Later in the evening, the rapper was spotted leaving the event holding hands with Fox.

Apparently he had visible blood stains on his shirt which, again, was bound to happen.

Machine Gun Kelly has been in the news quite a bit lately, particularly because of the heavy content of his recently released documentary Life in Pink.

The doco is now streaming on Disney+ if ya wanna suss it but trigger warning: it discusses drug abuse and suicide.

In the doc, MGK recounted attempting suicide following his father’s death in July 2020.

“One of the days, I just fucking snapped. I called Megan, I was like, ‘You aren’t here for me.’ I’m in my room and I’m, like, freaking out on her.”

After surviving the suicide attempt, he said that moment made him realise he “needed to kick the drugs.”