Litty Committee: Celebrate V-Day By Listening To Old-Timey Sex In The Bridgerton #2 Audiobook

Litty Committee is Pedestrian.TV's bimonthly book column. This is where I, Steff Tan, churn out reading lists and reviews based on what's getting about (what I see on Bookstagram).

The Viscount Who Loved Me is the second book in Quinn’s series about the Bridgerton siblings. Unlike book #1, which focuses on Daphne Bridgerton and the Duke of Hastings, numero deux is all about Anthony Bridgerton as he swans around town, trying to settle down.

At 29, Anthony is ready to marry but his reputation precedes him. Excuse my French, but the dude likes to fuck, I don’t know how else to put it. He’s a rake as the many mouths of the ton (the rich part of society) call him. Anthony doesn’t want to marry for love though, he doesn’t even want to fall in love.

After his father, Edmund Bridgerton, was struck down in his prime by a bee sting, Anthony believes he will also die young. He just can’t fathom living past the age his brilliant father died, it doesn’t seem possible to him.

Let that sink in.

The bloke genuinely thinks he’s just going to drop dead at some point in the near future, so he doesn’t want to complicate his life with love. Instead, he’d much rather marry someone he has no connection with and continue the line of first-born Bridgerton sons.

So what does Anthony do? He sets his eyes on the season’s incomparable: Edwina Sheffield. 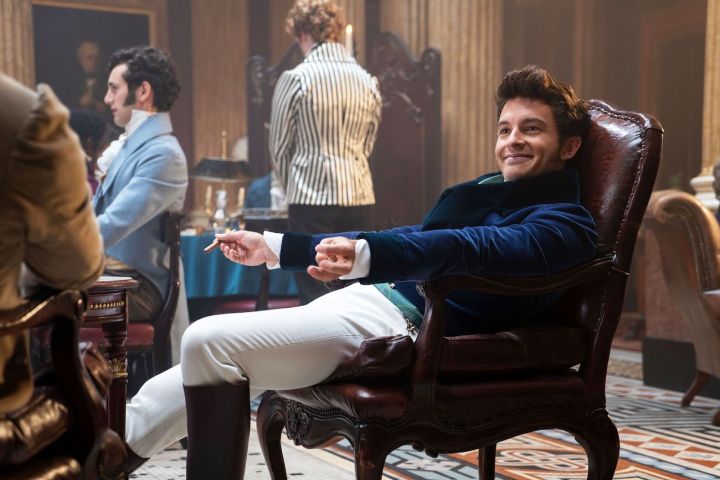 Edwina is the season’s diamond, she is the achingly beautiful daughter of Mary Sheffield and younger step-sister to Kate. Kate isn’t as beautiful as Edwina, but she’s still conveniently attractive, just like everybody else in Quinn’s universe. It’s a classic.

Anthony believes he can charm the silk stockings off Edwina, who he feels zero connection to, making her the perfect candidate to be his wife. But, he has to earn the approval of Kate first because Edwina has made it very clear that she will only marry a man her sister approves of.

You know where this is going.

I wonder what happens next!

Just like its predecessor, The Viscount Who Loved Me is deliciously predictable. It’s the ol’ enemies-to-lovers trope, packed to the brim with what I’m starting to realise is Julia Quinn’s bread and butter: [REDACTED], [REDACTED], and [REDACTED].

You know what you’re getting the moment you turn to page one or, in my case, hit play. It’s fluffy and ridiculous, and if the story didn’t move as fast as it did, I’d probably just skip to the spicy bits. But Quinn knows what her readers wants and she serves it (her characters burning for each other) in spades.

There are a few moments in the book that made me frown, though, and not in a good way. I hope Netflix leaves those particular scenes on the cutting room floor. We’ll see. But apart from that, it’s total fluff. It’s kind of like a comforting bowl of spag bol, you know? It’s messy, but it’s good so you can’t help but completely inhale it.

The audiobook is narrated by English actor Rosalyn Landor, who has become my very good mate these past few days. She may not be Julie Andrews, but she’s still a perfectly good Lady Whistledown. Her narration really makes you feel like a fancy bitch.

As for the old-timey intercourse, it’s a total smouldering slow burn. But just like how Anthony (Jonathan Bailey)’s bare ass hinted at the later chapters of the Netflix series, re: that entire episode dedicated to fucking, the book makes it very clear that sex is coming. And it came, hard. It’s easily the most sex I’m having this week (month).

Note to self: keep headphones within reach next time.

The Viscount Who Loved Me by Julia Quinn is available on Audible, along with the other books in the series.