ICYMI, celebrity jet usage has been a pretty hot topic in recent weeks after it was revealed Kylie Jenner used hers to avoid a 45-minute drive. Unsurprisingly, she was roasted to hell and back for it by climate activists who pointed out the obvious: why TF are we out here trying to be individually sustainable when celebs can undo all that with one lunch outing?

Then Taylor Swift was outed as the celebrity who actually uses their private jet the most. She claimed she wasn’t a passenger for all those trips (apparently she rents the plane out), but that doesn’t make those CO2 emissions any less potent, now does it?

Khloé, being the agent of chaos that she is, has responded to this piping hot tea by… liking a video on Instagram which makes fun of Taylor Swift’s jet usage. 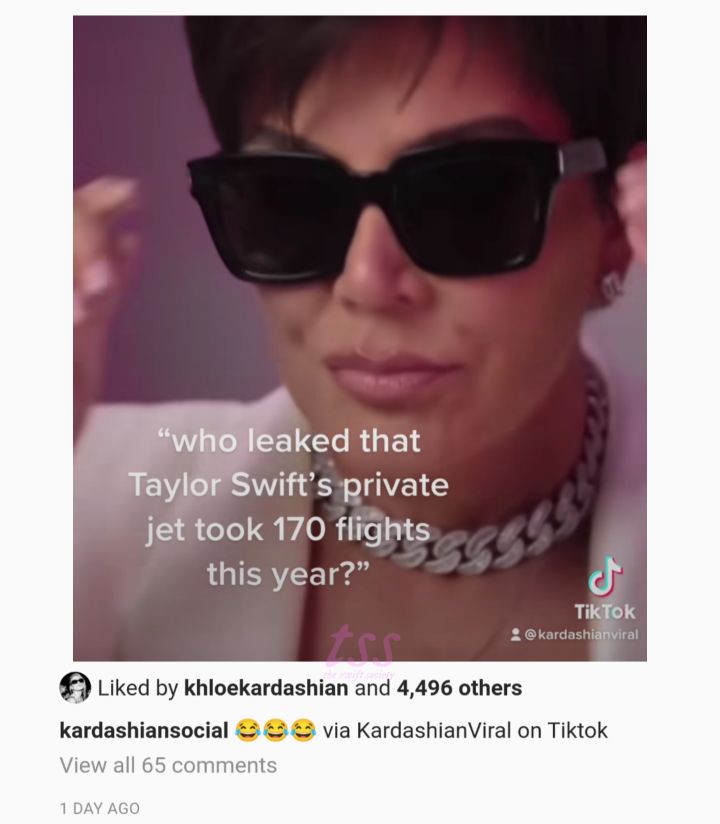 The meme was posted by @kardashiansocial which is hilarious to me because it means Khloé clearly trawls her own fan edits.

Honestly? A+ meme. Kris’ Illuminati-like ability to manipulate the media is equal parts hilarious and terrifying and I wouldn’t put it past her to fund this study… if it wasn’t for the fact that Kim Kardashian was also called out in it.

Meaning any jokes Khloé can make about Taylor’s carbon emissions are moot. Especially because if you add up all the jet usage of all the Kardashian-Jenner clan members, well… I’m sure it would be pretty bad.