David Attenborough has just joined Instagram and oh my god it’s the cutest thing in the whole wide world. The best part is that he did it all to share messages about climate change. Naww.

In the 24 hours since Attenborough created his account, he has already smashed the world record for gaining one million followers within four hours. This 100% affirms that David Attenborough is the world’s most loved man.

Attenborough’s first IG post is a video of the man, the myth, the legend himself telling followers about why he has decided to use the platform.

David Attenborough has spent a lifetime travelling, exploring the wild places of our planet and documenting the living world in all its variety and wonder. He’s also witnessed the damaged caused. Saving our planet is now a communications challenge. We know what to do, we just need the will. That’s why we want to share this message on Instagram. Because there is hope and together, we can inspire change. Social media isn’t David’s usual habitat so while he’s recorded messages solely for Instagram, like the one in this post, we're helping to run this account. In case you’re wondering, ‘we’ are Jonnie and Colin and we worked with David on A Life On Our Planet. So, as well as sharing the messages he’s recorded especially for this account we’ll also post some exclusive clips and behind the scenes content. Stay tuned.

“I’ve been appearing on radio and television for the last 60 years, but this is my first time on Instagram,” said David Attenborough in the video.

“As we all know, the world is in trouble, continents are on fire, glaciers are melting, coral reefs are dying, fish are disappearing from our oceans.

“But we know what to do about it, and that’s why I’m tackling this new way, for me, of communication.” 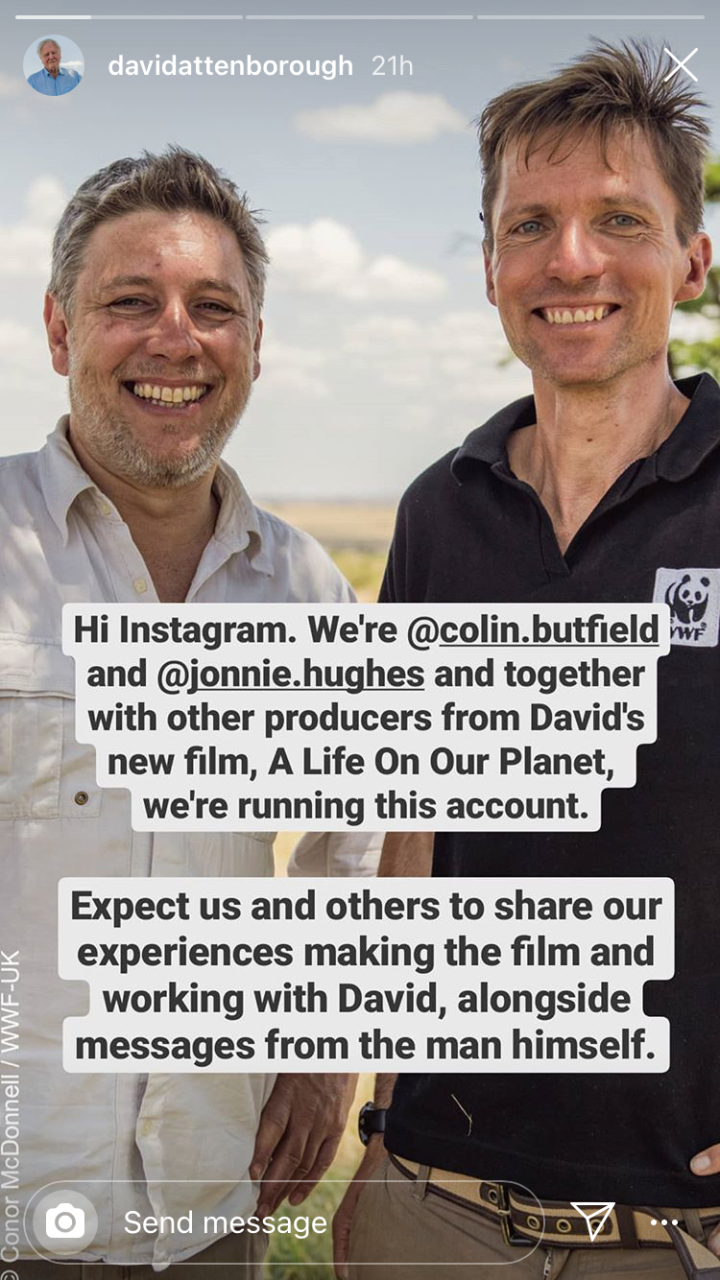 A Life On Our Planet is a stark climate emergency warning that looks back over the 94 year olds career. It’s is a first-hand account of humanity’s impact on nature and a message of hope for future generations. The doco contains startling before and after footage of our planet, and ends on 30 minutes of Attenborough telling us that it’s not too late.

A Life On Our Planet will be out in cinemas on September 28, and will be available on Netflix on October 4.