Michael Turnbull, who you might remember as the runner up to Sam Frost‘s heart in ‘The Bachelorette‘, is in a bit of hot water.

He was dragged through the coal heap last night by professional draggers A Current Affair, for supposedly asking his thousands of followers to sign up to one of those ‘multi-level marketing companies’ that are little more than a pyramid scheme.

The company, Nerium, produces a skin cream that can promises to reverse the signs of ageing so successfully, it *almost* looks like the people used in the before & after examples have had cosmetic procedures. It’s previously faced legal issues in the United States for using actor Ray Liotta‘s image without his permission, and like all ‘multi-level marketing companies’, you’re essentially making money by badgering your mates to buy your product.

So a couple months ago, Michael posted a video to his 145k Instagram followers, calling out for “motivated and energetic people to work in my team on a very exciting project coming to Australia soon.” 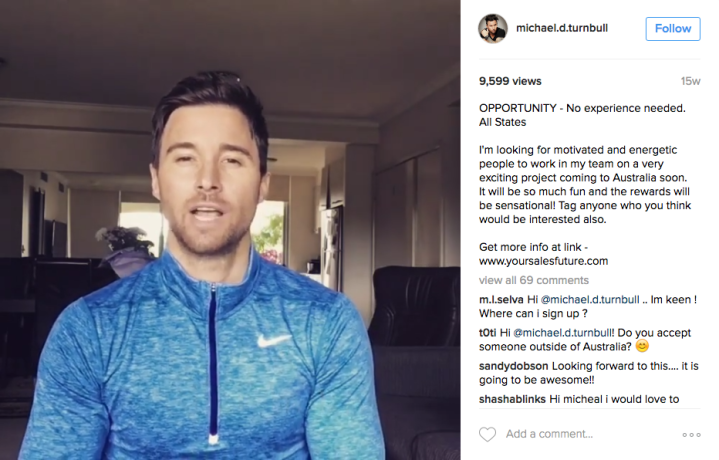 And here’s a transcript of the video:

“I’m very excited and proud to announce the launch of a billion dollar plus company coming to Australia in the next couple of months. That’s right, it’s a billion dollar plus company. We’re bringing it out to Australia, they’ve asked me to put together a strong, motivated, and entrepreneurial team to help spread the word here in Australia. So if that sounds like you, click the information box below, you’ll be working directly in my team, with me, it’s going to be an amazing ride, the rewards will be massive, and you’re gonna have a whole lot of fun. It’s going to be a great successful environment to be in, so if you’re interested, hit the link below, I’ll give you all the details, and I look forward to talking to you soon.

So ACA – which has run two beat-up pieces on Michael before – ‘investigated’, confronting Michael about his involvement in the company.

Following the segment (which you can watch in full here), Michael spoke to 2DayFM’s Rove & Sam this morning about the piece, where he again assured the public that the company was legit.


“It’s just absolute craziness,” he said of the ACA report. “Before I get involved in anything, I make sure I do my due diligence to make sure that it’s legit. It’s not about trying to rip people for a short term gain.”

He also says that part of that was flying over the US to meet with CEO Jeff Olson and directors face-to-face, to make sure the “business structure was legitimate, the product was legitimate.”

Michael has since made his Instagram private, but whether or not he’ll be moving forward with the business remains to be seen.