CONTENT WARNING: This article deals with anxiety and mental health. If you're struggling with mental health, there is help. Call Lifeline on 13 11 40, or Kid's Helpline on 1800 55 1800.

As promised yesterday, The Bachelorette and SAS Australia had somewhat of a crossover last night as Ali Oetjen was interrogated about her recent breakup with Taite Radley.

The 2018 Bachie babe was pulled into an interrogation with the show’s DS (directing staff), and probed her about the split from Taite back in July after two years of dating.

Ali Oetjen revealed she suffers from anxiety, brought on by her fame and “not knowing how to deal with it.”

Discussing her stint on Bachie, she said: “It went really well. It was definitely worth my time…”

Ali Oetjen then added: “I met an amazing man, and we spent two amazing years together… He didn’t want the same things that I wanted. I still think he’s my soulmate, but our timelines are different.” 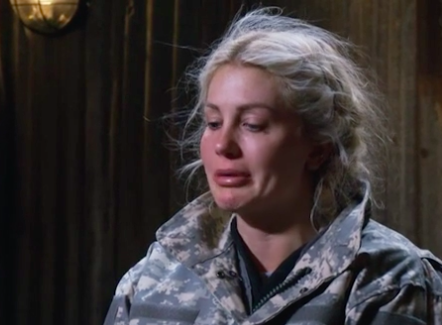 Ali Oetjen broke down during her interrogation about ex Taite. (Credit: Seven)

The show’s DS told Ali Oetjen she needed to move on, as Jason Fox informed her: “It’s not going to help you going forward in the rest of your life.”

Noticing that she was becoming more and more upset, Ollie Ollerton reminded her to “just breathe” and “relax”.

“I kind of feel a bit empty. I’m trying,” she continued tearfully.

Following the emotional moment, fans took to social media to express how heartbreaking it was to see Ali discuss her breakup.

Honestly can't believe Ali's still in there. Hats off to her! #SASAustralia

In the lead-up to the ep, Ali’s ex Taite told the Daily Mail that he was totally in the dark about his mention on the show.

“It would have been nice to hear it from her,” he said. “She hasn’t spoken to me about anything since she left.”

“I guess I have to wait and see what’s on tonight,” Taite Radley added. “I think she is in a stage of her life where she is really finding herself truly.

“She’s not trying to be someone for someone she’s with to make them happy, she’s just trying to find her true self. When she does find that, the right person will come along and I wish her nothing but happiness. It obviously hurts seeing her so upset but I know it’s just part of her journey.”

Meanwhile, Ali Oetjen told the publication that her ex should not have been surprised to have been mentioned on the show as he knew “nothing was off limits” for the show’s recruits.