PEDESTRIAN.TV has teamed up with Remedy Drinks to get your gut in good nick.

It’s about bloody time someone came out with an energy drink that won’t fuck up our insides.

Gut-lords Remedy Drinks have gone and done what most of us thought was impossible – they’ve whipped up a kombucha energy drink that gives you a dose of caffeine without taking a sledgehammer to your intestines, or wherever it is in your body that cops all of the usual sugar and nasty-ass ingredients. Clearly my knowledge of the human body is limited.

The point is that the new drink, Remedy Good Energy, doesn’t have sugar, artificial crap or anything that’s usually found in those energy drinks your mum made you stay away from when you were a kid. Seriously, the way your parents went on about them you’d think energy drinks were able to talk you into setting fire to the school.

But looking back they had a point, there is usually a lot of shit in energy drinks. Remedy Good Energy, on the other hand, is an energy drink that’s deadset good for you.

As for flavours, you can get a glimpse of ’em below. 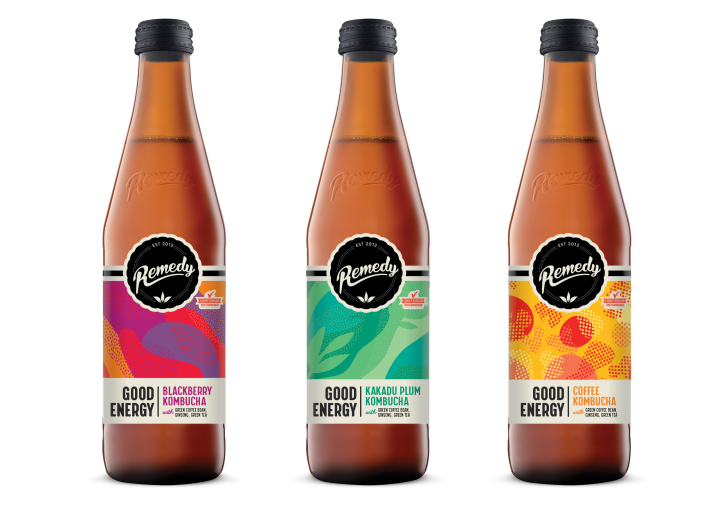 For those of you with poor eyesight, here are the specs:

Obviously if you’ve had a long night spying on your neighbours who are *this* close to a divorce and you need a solid pick-me-up, the coffee kombucha flavour packs the most caffeine. But, both blackberry and Kakadu plum also have the same amount of caffeine as a run-of-the-mill cuppa coffee so either way you’re going to be buuuuzzing (without getting jittery too which is just ideal).

As a major bonus, Good Energy actually taste like ingredients we know – get the fuck outta here with those drinks that taste like straight-up chemicals.

Mosey on down to your nearest Woolies as of today to get a bottle or, if you hate interacting with the public, go to Remedy Drinks and order them online.