In general, you could not pay me enough money to set foot into a haunted house. Nope. Hate ’em. Love, love, LOVE reading messed up tales about them – but actually physically being present in amongst the ghosts and ghouls? Nope and then also burn the idea, mate. No.

So of course I’m the first point of call, after my Editor found out I was driving through Junee in country NSW on a recent road trip, to visit what’s allegedly the most haunted house in the Southern Hemisphere, let alone Australia – Monte Cristo Homestead. It’s the star attraction of what’s otherwise quite a cute, low-key country town just outside of Wagga Wagga. 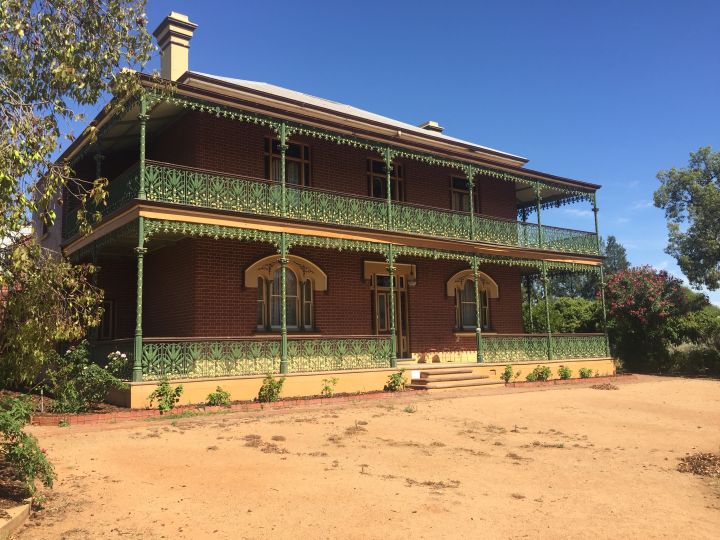 Here’s a bit of a background for you. According to their site, Monte Cristo Homestead was built in 1876 by William Crawley, but was continually added to over the years, resulting in the huge homestead that stands today. This is because old Willy made bank after founding the Railway Hotel, foreseeing an influx of tourists after the Great Southern Railway was laid.

William Crawley was married to Elizabeth Crawley and the couple had seven children who survived to adulthood. Mrs. Crawley was known to rule “with an iron fist”. William Crawley eventually died in his homestead in 1910 from heart failure and blood poisoning caused by a carbuncle in his NECK. Rank. Mrs’ Crawley passed in 1933.

Well – the real macabre stuff from Monte Cristo Homestead comes from the Ryan family, who have lived on the property for the last 50-odd years and have some freaky stuff to say.

BUUUT back to my visit. I went along with my friend Lisa, but we were road tripping with her dog Hugo. He’s a tiny Italian greyhound but Monte Cristo had a very firm no dogs policy (understandable) so Lisa stayed in the car with Hugo and I went in. This will be important later.

You’re ushered through what’s essentially a gift shop to the grounds. It’s a pretty huge homestead, so I spent a bit of time looking around the gardens and just marvelling at this looming mansion full of ghosts and probably also demons. Then, you’re instructed to walk up to the door and knock. On the way up there’s a section of the staircase that’s a different colour to the rest: 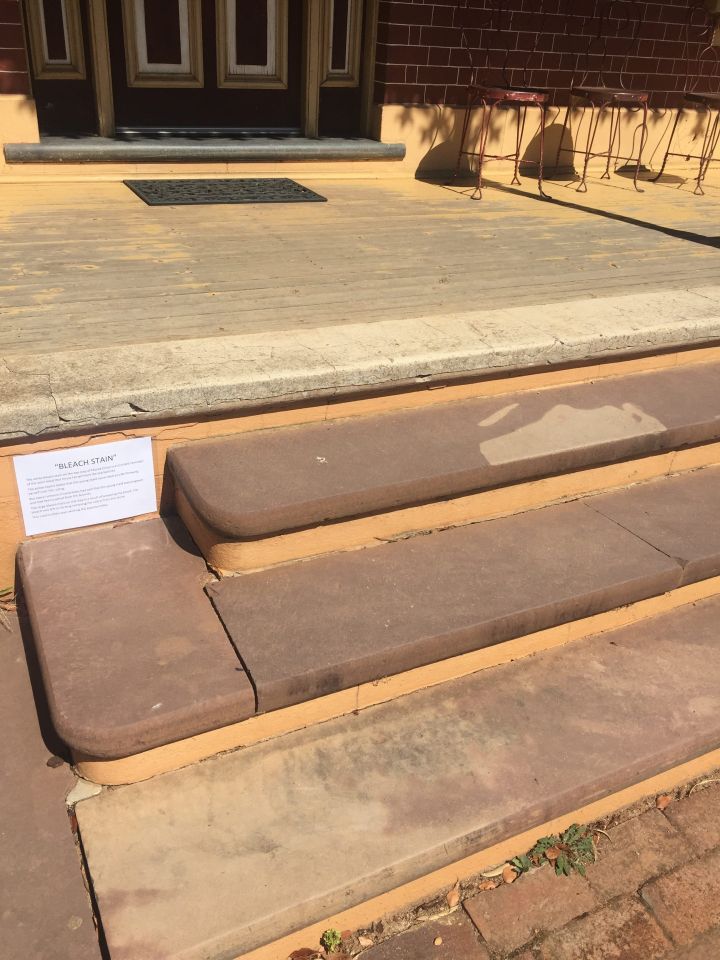 That sign details one of the horror stories surrounding Monte Cristo Homestead – that at one point, a maid in the house threw herself off the balcony above, dying upon impact on the stairs, because she was pregnant to Mr. Crawley. Another theory is that Mrs. Crawley pushed her off the balcony herself. The mark is due to bleach used to get the blood stain out.

I knocked on the door and a TERRIFYING OLD LADY (she was probably completely normal but I wasn’t expecting an old lady dressed in frilly garb to answer the door, ok) opened it slowly and stuck her head through the gap. Without saying a word she ushered me in. Terror levels – 8.5/10. The house was dark and all the rooms were chock full of creepy homewares. 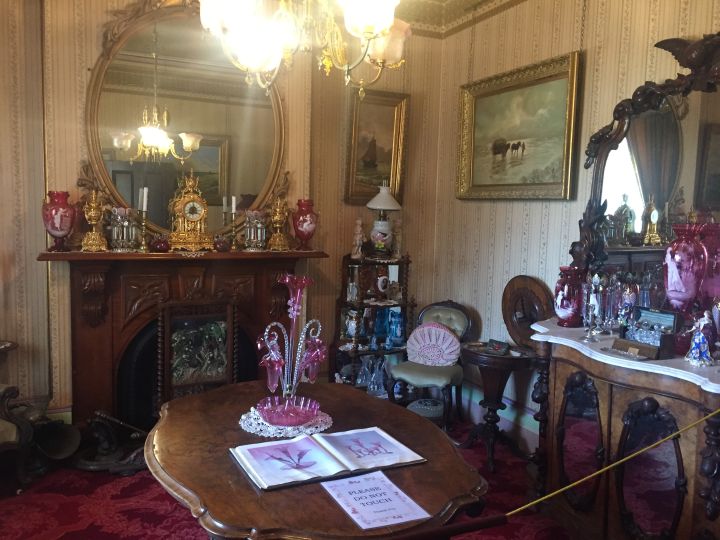 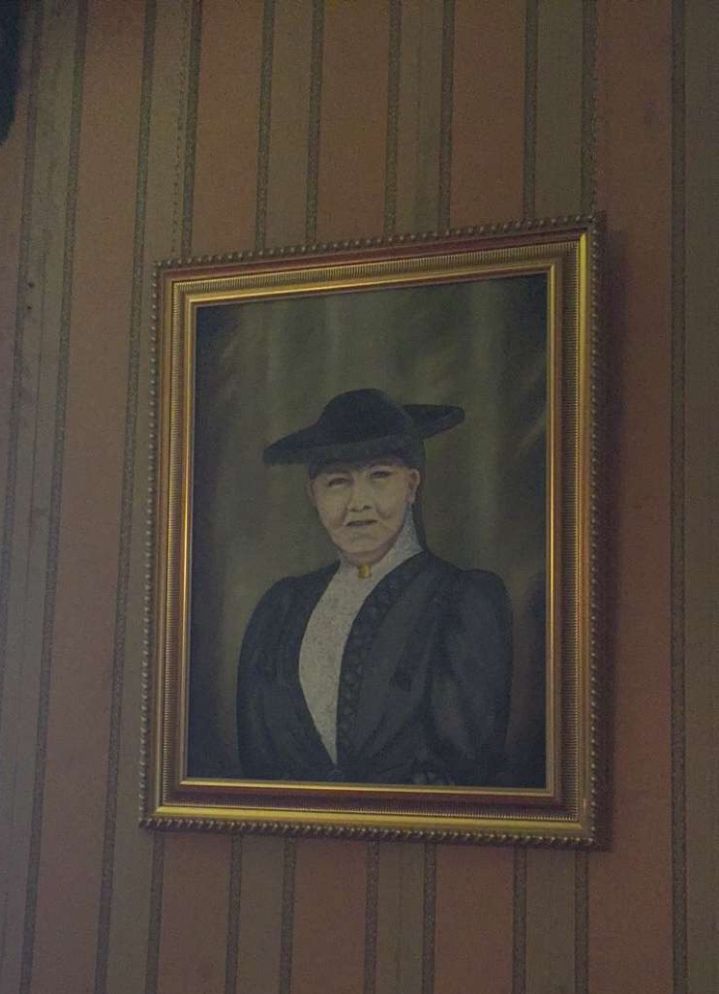 It all FELT creepy, but I couldn’t tell if that was because of an actual presence of ghosts, or just the vibe the Ryan family has painstakingly created. It’s a great, scary vibe – there were about five other guests in the house with me at the time, and we were all being quiet as mice because the place is dark, cold, and feels like people still live in it thanks to all the knick knacks around.

I walked up the stairs and immediately felt wobbly. I put it down to the staircase being narrow and dark. The top level had bedrooms and the wide balcony. The rooms are fuuuuuucked. Like 10/10 would encounter Annabel the doll in there. 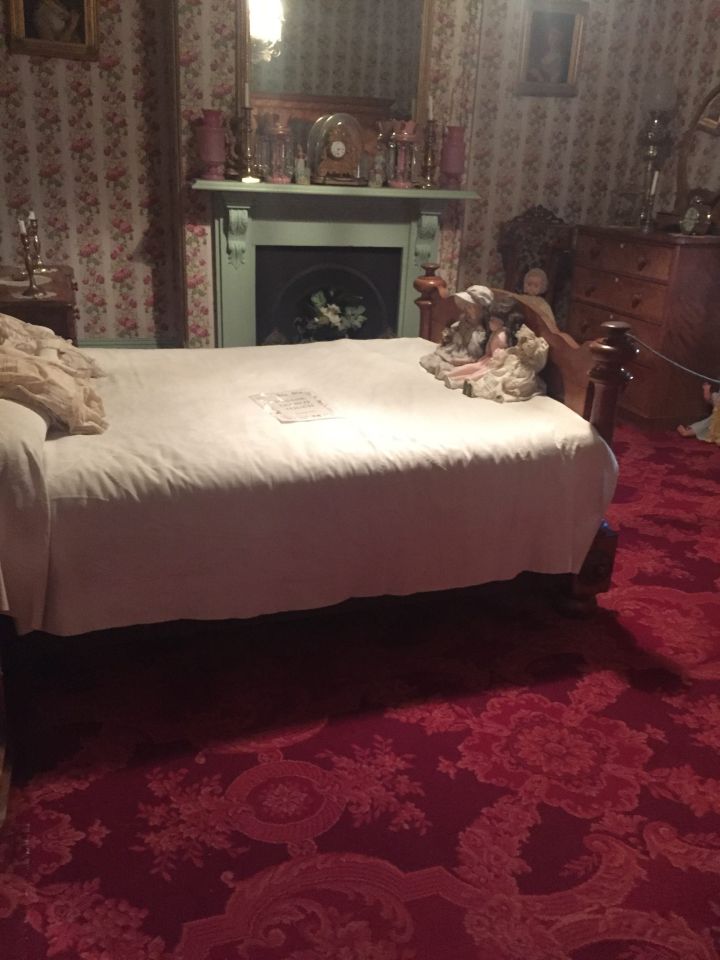 You can actually do sleepovers at Monte Cristo which is a surefire way to leave with a goodie bag of demons, no? Why on Earth would anyone do that. You literally sleep IN these rooms. Holy lord no thanks.

Anyway. I wandered out onto the balcony and felt that weird dizzy sensation again. The balcony felt like it slanted downward, like you weren’t safe standing there. I wondered if that was simply because I knew the maid jumped off it. Hmmm…

From there, I headed out the back, where the stables are. This area felt the most eerie. I actually physically could not make myself go into the stables. They run along the side of the outdoor area and I literally COULD NOT GO NEAR THEM. I did force myself to go into the caretaker’s cottage, which had this delightful inclusion on the wall: 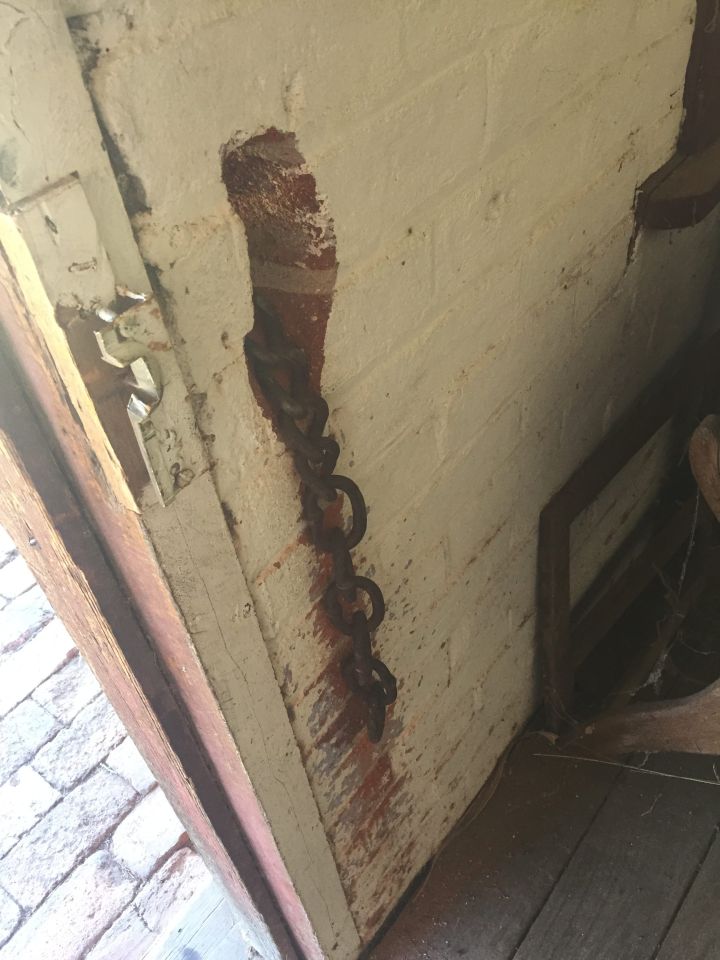 That’s allegedly where the housekeeper chained up her mentally disabled son, and the groove in the wall? 30 years of him wearing it down with that chain. Honestly I hope that story is not true. There’s another story associated with this cottage which I learned on site – apparently in the 60’s, the caretaker was shot to death by a boy from town who was inspired by the film Psycho.

Here’s the bed they’ve got in there. 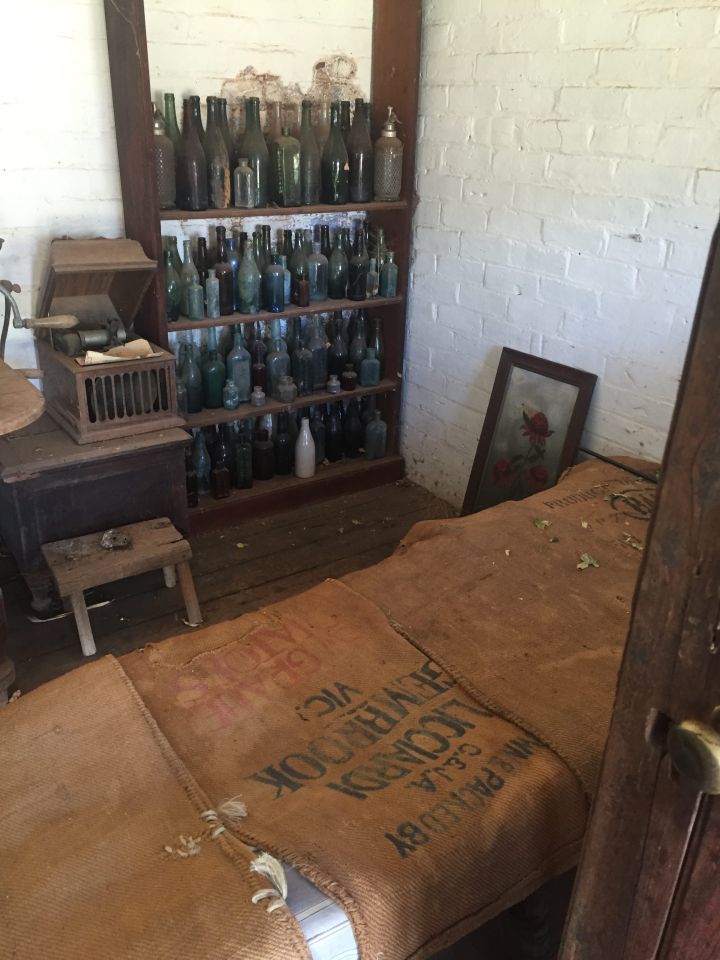 That was more than enough messed up business for me for one day, so I high-tailed it back to the car. Turns out, Lisa’s spent the hour I was wandering around in the homestead watching ghost tour videos of Monte Cristo on her phone, plus reading all about the place.

I told her how I felt dizzy on the stairs. She looked extremely excited, before explaining to me that one of the things many visitors mention is feeling “unsteady” or unstable on the staircase – and that the theory is that it’s connected to a story of a child who fell down the stairs to her death while visiting the homestead.

The balcony dizziness I’d experienced? Yup, people say they get that too – and that it’s connected to the maid her jumped (or was pushed) to her death, like I thought.

The stables are apparently the most haunted part of the homestead – remember how I was so freaked out by them I just didn’t want to go near them at all? Apparently a stable boy burned to death in there, and it’s the most supernaturally active part of the property.

Look. All of it could be absolute BS, and I can definitely explain away my experiences with excuses like “you probably found the staircase really narrow” or “the balcony probably does slant a little”. But hey – I totally believe this ghosty stuff and I totally reckon my experiences were actually supernatural.

It’ll cost you $12 to visit Monte Cristo, with dinner tours costing $125. Sleepovers? They’re $195 and include brekkie and dinner.

Would I say it’s worth a visit if you’re travelling through? If you love weird ghost content – hell yes.

Love anything creepy / unsolved mysteries? Then you’ll love Pedestrian’s All Aussie Mystery Hour podcast. Subscribe on iTunes HERE, or on Spotify HERE. Or, you can just listen / download below.

Get inspired to plan your next trip – read the latest in travel news, travel deals and cheap flights.