A TikToker caught a hotel worker rummaging through his private possessions and it truly is the stuff of nightmares.

Arturo Brunello (@arturbo86) installed security system iSentry on his laptop before leaving his hotel room. The app has motion sensors and begins recording with your laptop’s camera when it senses nearby movement. It then emails you to let you know if it’s found something.

For Brunello, it was one hell of a catch.

In truly spooky footage shared to TikTok, Brunello found a hotel housekeeper going through his things and methodically inspecting the room.

I realise it may have sounded like I was setting up a Paranormal Activity situation but honestly this is worse. Ghosts can’t steal your wallet and commit identity fraud!

In the video a man can be seen opening Brunello’s drawers, rifling through his cupboard, inspecting his backpack and — get this — opening his hotel-provided safe!!!!

He also helps himself to a beer from the fridge, which is actually kind of hilarious.

It’s unclear what the man was looking for. However, Brunello said reviews for the hotel had mentioned theft though no one had proof.

Thankfully, the only thing the man took was the beer. But we know these things don’t always end so well.

READ MORE
OMG: A Vic AirBnB Host Told Guest To ‘Burn In Hell’ After Writing It Was ‘Just OK’ In A Review

Brunello took a moment to warn others when they travel. Either set up security or take your valuables with you!

“I set it to upload to Dropbox, so I could check in while I was away from the room,” he said.

“Be careful when you’re travelling.

“This was the first time I set up a camera and I caught this… That is alarming to me.” 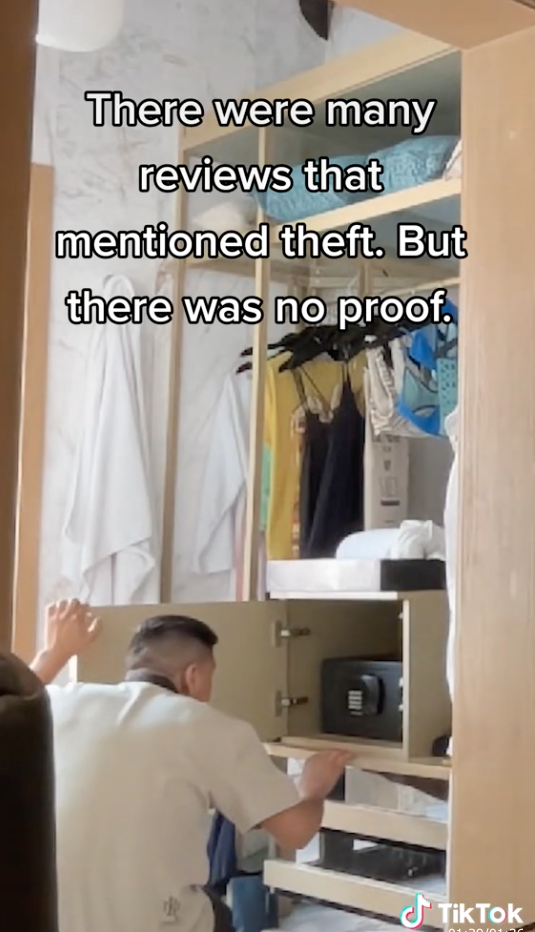 He didn’t name the hotel or its location though, because he said they did a great job at managing the situation.

“We reported it to the hotel and they took very good care of us after the fact,” he said.

“Just be careful out there and use technology to your advantage.”