Drunk Guy Beats The Shit Out Of A Robot Cop In A Carpark, Because It’s 2017

One of the most concerning prospects about our glorious cyberpunk future is that the promises of RoboCop are probably going to become real, and we’re going to be policed by unemotional droids built by some nerd in California and powered by a cold, unfeeling algorithm.

Luckily – for now – our cybercops are absolute useless nerds like this moronic robo-hobo, which patrols the carpark of the company that built it:

Meet K-5 —the droid taken down by an alleged drunk man last week. Don’t worry, he’s back on patrol 🙂 details @abc7newsbayarea at 11 pic.twitter.com/0qthDHONQq

Nobody has even had the good sense to give this enormous robot trashcan a gun. It sort of just glides around looking like the biggest idiot in the world. So it’s perhaps no surprise that some drunk guy took it upon himself to enact his own kind of justice and beat the shit out of it.

Police in Mountain View say that Jason Sylvain, 41, stands accused of drunkenly knocking the Knightscope K5 down as it patrolled a parking lot in the area.  ABC7 News including this baffling sentence in their report, which I challenge on moral and factual grounds:

The 300-pound robot named K5 spins and occasionally whistles, so it’s hard to understand why someone would want to knock it down.

Let me tell you this, ABC7 News. There are two very good reasons why someone would want to know the K5 down. Number one: it is a cop. Number two: it is a complete nerd. Just look at this thing.

“I think this is a pretty pathetic incident because it shows how spineless the drunk guys in Silicon Valley really are because they attack a victim who doesn’t even have any arms,” Mountain View resident Eamonn Callon said. C’mon Eamonn. Admit it. It would be fun to knock this thing over.

At least we got this great headline out of it: 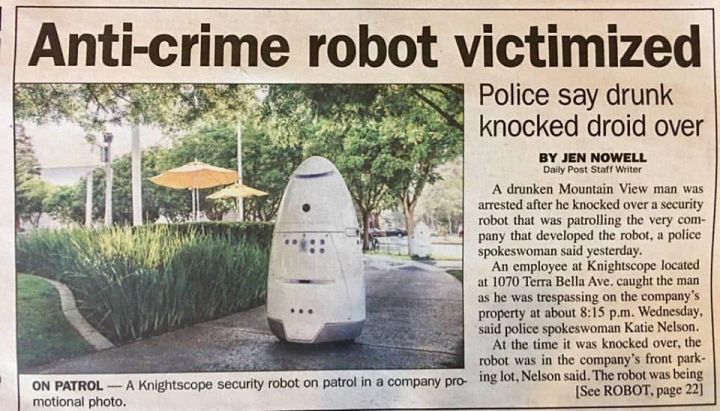