Rumours that right-wing firebrand / perpetual sook Cory Bernardi would ditch the Liberal Party in favour of a new conservative party of his own design have been flying thick and fast over the past year or so. It wasn’t helped by his blatant Donald Trump fanboyism while he was over in the United States. 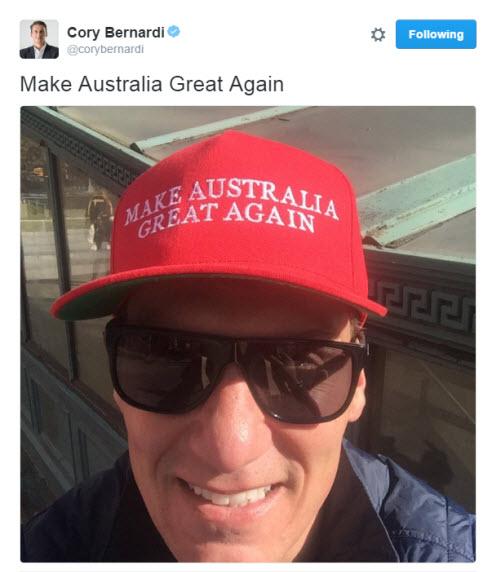 In today’s Herald Sun, everyone’s favourite blogger Andrew Bolt is claiming that this is actually happening, and it’s happening sooner than people thought. Bolt believes Bernardi could pull the trigger as early as this week.

Malcolm Turnbull’s nightmare start to his make-or-break year is about to get a whole lot worse. The Prime Minister now faces a split in the Liberal Party as early as this week. The high-profile Senator Cory Bernardi is almost certain to quit the Liberals and start his own conservative party. It would be based on his Australian Conservatives movement, which already has more than 50,000 members.

Of course, if this is true it might not be a great move for Australian conservatives. It’d mean Australia would have three major right-wing outfits – the Coalition, One Nation and Bernardi’s party. That’s a serious splintering, and might not pay off for them electorally.

Bolt is clearly enjoying his role as arch confessor-in-chief here, saying that Liberal MPs have come to him begging for intel on whether Bernardi can be convinced to stay in the party:

Nervous Liberal MPs have asked me if they could still persuade Bernardi to stay in the party. Answer: no. The Liberals — even Abbott — have unfairly treated him as too extreme to make a minister. As a backbench Liberal senator from South Australia, he has relatively little influence on policy and cannot rock the party boat too much by speaking up, despite being one of our most articulate politicians.

Mmm. Should we take this with a grain of salt? Bolt is obviously plugged into Bernardi ideologically, and they share the same South Australian conservative roots. It’d be no surprise if Bernardi were using Bolt to fluff the landing of a big announcement.

Stay tuned. Malcolm Turnbull’s shit fortnight could be about to get far worse.