Not that I’ve done it or anything (honest), but robbing random people on the street is a game of calculated risks. There’s a litany of factors at play when approaching any potential victim, but above all else you simply have to be sure that person is not a UFC fighter. Really, it’s the one cardinal rule if you hope to get away relatively intact. If this seems like a complex judgment to make, I’ve taken the liberty of preparing a handy flowchart. 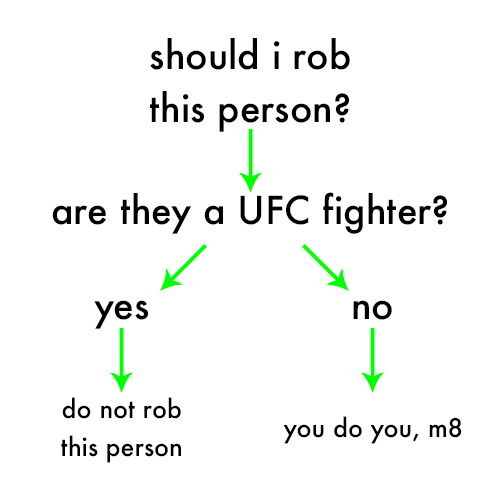 And if that alone still doesn’t have you convinced, consider the following cautionary tale.

A would-be thief in Brazil has come unstuck in the most spectacular way after he unwittingly attempted to rob UFC fighter Polyana Viana armed with nothing more than a fake cardboard gun.

The story goes that Viana, a 26-year-old strawweight fighter with a 9-1 career MMA record, was waiting for an Uber in Rio de Janeiro when an unidentified man approached her, sat next to her, and asked the time. Classic thief premise, really.

From there though, things went incredibly pear-shaped for old mate.

The attempted thief demanded Viana hand over her phone, claiming to be armed despite the fact the barrel of his supposed “gun” quite obvious bent; literally, he was holding a rough cardboard cut-out of a gun, and not an actual weapon of any kind.

As for what happened next, Viana tells the story pretty well:

When he saw I saw him, he sat next to me. He asked me the time, I said it, and I saw he wasn’t going to leave. So I already moved to put my cell phone in my waist. And then he said “Give me the phone. Don’t try to react, because I’m armed.” Then he put his hand over (a gun), but I realised it was too soft.

He was really close to me. So I thought “If it’s a gun, he won’t have time to draw it.” So I stood up I threw two punches and a kick. He fell, then I caught him in a rear-naked choke. Then I sat him down in the same place we were before and said “Now we’ll wait for the police.”

That’s right, sports fans. Viana clocked his fake gun instantly and beat the soul out of that man, and then calmly put him in a chokehold until help arrived. In fact, she beat him so badly that he wound up pleaded for the cops to be called.

He told me to let him go, like “I just asked for the time.” I said “Asked for the time my ass,” because he saw I was very angry. I said I wouldn’t let go and that I was going to call the police.

He said “Call the police then,” because he was scared I was going to beat him up more.

Make no mistake about it either: When Viana says she “threw two punches and a kick” she very much undersells the fact that she beat this man so badly he probably saw God.

Dana White came through with the goods in the form of a photo of old mate’s face post-beatdown which more closely resembles a well-tenderised minute steak.

On the left is @Polyana_VianaDF, one of our @UFC fighters and on the right is the guy who tried to rob her #badfuckingidea pic.twitter.com/oHBVpS2TQt

Again, and I simply cannot stress this enough here: Do not try to rob a UFC fighter.

Do literally anything else.