PEDESTRIAN.TV has teamed up with The United Cup to celebrate a brand new tennis tournament.

As the great Swedish band, ABBA once said, ‘The winner takes it all, the loser has to fall’. While we’re used to seeing one person up on the podium collecting the trophies and accolades, sometimes sport can have moments where dream duos steal the show.

Who could forget last summer’s Australian Open when childhood friends, Thanasi Kokkinakis and Nick Kyrgios, became Grand Slam superstars? The atmosphere was electric and the ‘Special K’s’ celebrated their first-ever win together.

That wholesome energy is set to return for the 2023 tennis season thanks to a brand new tournament.

The United Cup is a unified tennis event that sees the top men and women players coming together to represent their 18 (!!) different countries. Over 11 days in Brisbane, Perth and Sydney the United Cup tournament will comprise of two men’s and women’s singles matches and a mixed doubles match across two days. Huge.

Both men and women tennis players will be playing together on the same team and be paid the same amount of prize money. The United Cup has a prize pool of USD $15 million (AUD$22.2 million), so it’ll be a grand ol’ pay day for the tennis stars, plus 500 ranking points.

Clearly, the United Cup is walking the walk when it comes to gender equality in sports. In a world first, the tournament will see mixed gender duos facing off for the win. For example, in Perth, we might see world No.3 Stefanos Tsitsipas and Maria Sakkari of Greece up against Bulgaria’s Grigor Dimitrov and Viktoriya Tomova.

These are just a few examples of the epic pairs who could play in the United Cup. Other tennis superstars will also take to the court including world No.2 Rafael Nadal, the USA’s Taylor Fritz and Aussie hopes Nick Kyrgios and Ajla Tomljanovic in Sydney as well as world No.2 Casper Ruud in Brisbane. So, it’s essentially Tennis’ Eurovision competition.

To get you stretched and warmed up for a summer of tennis duos, here are our top iconic sporting pairs.

As if we wouldn’t put Serena and Venus first?!

Serena and Venus Williams have been playing tennis for nearly their whole lives, however it was in the 1990s that the duo took the tennis world by storm and began winning titles. While they’re always connected, the sisters were actually professional rivals for a good portion of their careers. Between the 2001 US Open and the 2017 Australian Open, the pair contested nine major finals. Imagine that Christmas lunch?

Rivalry aside, Serena and Venus are two of the most famous siblings in sport (and pop culture in general) and are a total iconic duo.

Couldn’t go past a sporting icons list without paying respects to the King of Spin, Shane Warne. Back in the 1990s and early 2000s, Shane Warne and Glenn McGrath dominated the cricket green for team Australia. They were a part of the huge golden era of Australian cricket and even retired together after the fifth test of the 2006/ 2007 Ashes where Australia won 5-0 to England. Since Warnie’s passing back in March, Glenn has gone on to share some memories of the friends’ time together and even details of their last phone call.

No, I don’t have something in my eye, why do you ask?

Darren Lockyer and Johnathan Thurston are two of Queensland’s greats. While these two didn’t play NRL on the exact same team, (Darren spent his sporting career at the Brisbane Broncos while Johnathan played for the Bulldogs and the Cowboys) the duo did represent the Sunshine state in the State of Origin. The Maroon legends have been firmly placed into the rugby hall of fame and Johnathan has considered Darren amongst his closet friends and mentors. Sweet. 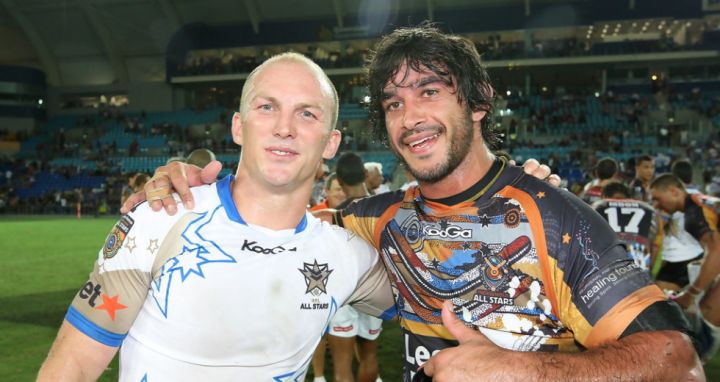 These two may be a tad less well known than some of the other names on this list, but that doesn’t make them any less iconic. Nia Jerwood and Monique de Vries started sailing together in 2016 at the Fremantle Sailing Club.

The duo won the 420 World Championships then headed to the World Cup Olympic Test Event in Enoshima, Japan where they won silver. This meant they secured a place in the 2020 Tokyo Olympic Games. The West Australian pair were also named the Female Sailors of the Year in 2019. No small feat and definite icon behaviour.