Forget my family. Forget my friends. Forget my coworkers. Hell, forget my partner (sorry, George). Gritty is the only living creature in this universe for which I feel love. Gritty, the big orange bastard from Hell, is the sole occupant of my heart. When I close my eyes, the terrifying, furry nightmare on skates known as Gritty is the only thing I see. When I sleep, my dreams are of wide-open eyes and a wide-open mouth. My subconscious conjures up only images of a bearded fuck in a Flyers jersey. I dream of Gritty. 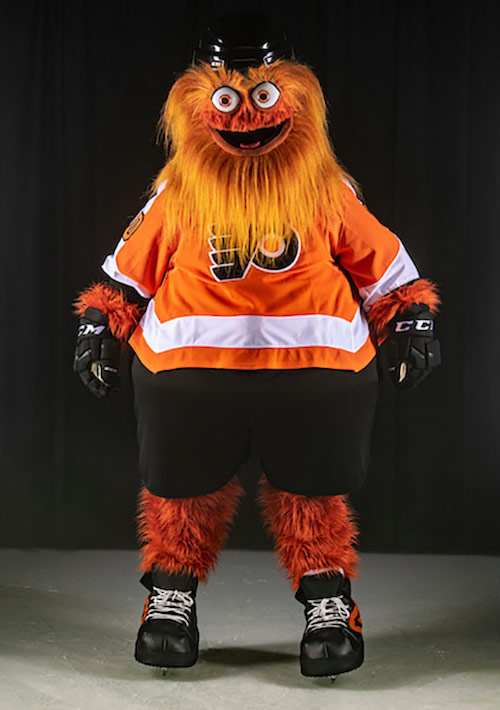 Pictured: The light of my life.

Ever since he was introduced back in September as the official mascot of NHL team the Philadelphia Flyers, I have been enamoured with this horrifying beast. The perfect personification of a city mostly known for throwing batteries at visiting sports teams and erupting into end-of-the-world-level mayhem upon winning the Super Bowl, Gritty is the spirit of Philadelphia made flesh. A creature so imbued with violent energy that even children instinctively want to fight him.

If you think just watching Gritty skating around being a vision of pure animosity is satisfying, then you can’t even begin to understand the pure joy of watching Gritty get into this Christmas spirit by decking a series of Santas, something that the beautiful sport of hockey has facilitated for us.

.@GrittyNHL is OUT OF CONTROL, as usual. pic.twitter.com/LVLjBRZKg8

How do you explain to children why Santa has been brutally checked by the scariest motherfucker to ever put on skates? You don’t, they are in Philadelphia, and this is perfectly normal to them.

It's @GrittyNHL's world and we just live in it. pic.twitter.com/BJEkCxq8yt

What a beautiful time to be alive: