You tend to forget that, having grown up in Melbourne, Ben Simmons was actually a pretty handy footballer in his younger days and actually had to choose between seriously pursuing footy or basketball. Despite (quite smartly) choosing the path to the NBA, the footy skills apparently haven’t left Simmons, who put them on display yesterday during a casual muck around at the Richmond Football Club.

Simmons swung by the iconic Punt Rd training ground of the Tigers to hang out with Richmond AFLW gun recruit Sabrina Frederick yesterday (despite being a devout, lifelong Essendon fan thank you very much), where he not only added another photo to the ever-growing wall of “international sports star interacts with insane local game,” but he showed off an entirely decent right leg by drilling a textbook drop punt straight through the big sticks from just outside 50.

That ball hold is anything but textbook, but you can’t fault the form otherwise. Good ball drop. Solid follow-through. Hung it out on the breeze top of the right goal post and rode it all the way home. There’s key forwards with 150 games under their belts who don’t strike the ball that cleanly.

And if all that weren’t enough, Simmons calmly slotted another one from the 50 arc, only this time hard up against the boundary line. 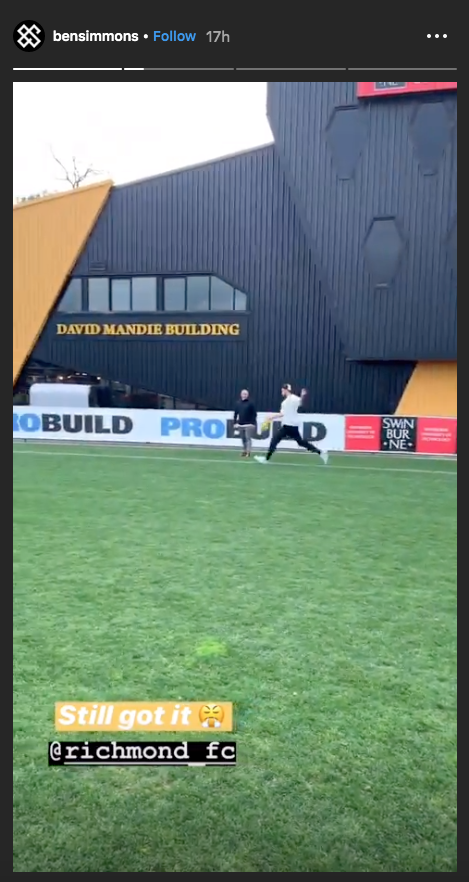 Simmons is in town for a little while, so the story goes. And injuries have his beloved Dons in desperate need of a key forward for the next few weeks. Slap a red and black jumper on him and let him stand in the goal square. There’s literally nothing to lose there.

Other than, y’know, hundreds of millions of dollars in NBA salary after he blows out his ACL, of course.