STALE TAKE: I Still Want To Have Sex With Paolo Despite Him Being A Huge Dog To Lizzie

The Lizzie McGuire Movie left me with many revelations.

There I said it. And I’ll say it again: I’d sleep with Paolo even though he inevitably screwed Lizzie over. I’m not even sorry about it.

For those of you who need a quick refresher on one of the most iconic films of our time, here’s the tea. *Deep inhale*

Lizzie went on a school trip to Rome. There, she ran into famous pop star softboi Paolo, who mistook her for Isabella, his famous singing partner. Paolo and Isabella are, like, so hot right now but apparently they broke up, so Isabella fled town leaving Paolo without a partner. Paolo later asked Lizzie if she could pretend to be Isabella and lip-sync at the Italian Music Awards (oh yeah, he exposed Isabella for needing a backing track because she can’t sing).

Well, Gordo (that annoying one) later ran into Isabella, who informed him that it was in fact Paolo who can’t sing. Together, they realised that Paolo was going to embarrass Lizzie onstage – Paolo thought that Lizzie couldn’t sing, so he wanted to cut the backing track onstage, hoping Lizzie would fumble, thereby make Isabella look a fraud in front of Italy. In the final scenes, Paolo inevitably got exposed for not being able to sing, and Lizzie and Isabella ended up performing “What Dreams Are Made Of” together.

It’s an ultimate girl power narrative, with Paolo rightfully scorned. This is where we’re at.

Yes, Paolo obviously has some red flags that we need to consider before I go on my thirst-rant…

Firstly, despite being willing to weave amongst Rome’s busy streets on his segway, he refused to simply drive around that car when they were stuck in traffic in front of Miss Ungermeyer and the class bus… There was literally room. Suss behaviour. Let me illustrate:

I mean, hey, maybe he was just being really considerate of Lizzie’s safety?

Then there was the time he said that he loved Isabella like a sister and dropped the “it’s complicated” line. Oh yeah, and then there was the whole plan of wanting to embarrass Lizzie onstage in front of thousands of people in order to frame Isabella as a fraud despite the fact this his vocal talent equated to that of squealing pig’s. But, hey, that’s just a minor detail – we all have baggage.

So yes, I should probably stay away, but despite exuding traits reminiscent of someone with small dick energy, Paolo could legitimately punch me in the face and I’d still say thank you. “You shine like the light from the sun,” Paolo could tell me and I’d still melt, knowing very well that he says this to every human and their dog.

Lizzie is my homegirl but if Paolo popped up on Grindr – knowing what I know now – I’d still send eggplant emojis.

For one, he has some undeniably impeccable fashion. I love the fact that he always wears blue. Who can blame the kid? He knows what works for him and, honey, if it ain’t broke, don’t fix it.

Secondly, his awkward gyrations and head-bops are endearing. I giggled like a 5 year-old when he started to wiggle his hips while teaching Lizzie how to dance during rehearsals. Like, if I met him on a night out in Australia, he’d probably skull a Negroni before declaring “let’s dance” and awkwardly shimmying on the dance-floor at Stonewall, ARQ or Sircuit. Do you know what I mean? 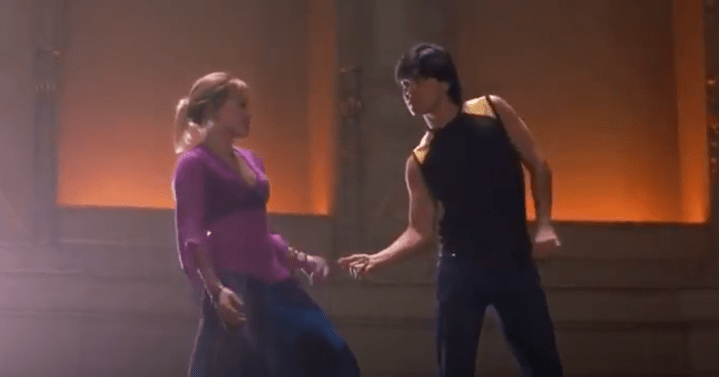 I’m sure Lizzie wouldn’t mind if Paolo and I engaged in a late-night vis-à-vis. She’s probably out there in the world living her truth, inspiring and succeeding as Lizzie does. She’d be above the ’03 Rome drama anyway, so surely she’d let us inferior folk enjoy her sexy seconds.

Look, I could ramble on all day but, long story short…

Unsurprisingly, this revelation has been met with distain from those I thought I could trust the most.

When I stormed into my roommate’s bedroom declaring that I’d have sex with Paolo, she wasn’t a happy camper:

“He’s a piece of shit, Louis. He’s hiding his insecurities by manipulating someone else. Like, he’s a fucking villain. What the fuck… Why would you say that? I’m so disappointed in you.”

My decision to come out as a Paolo-desirer was also shamed upon by my same-named co-worker, Louis. “You’re out here frothing on dumbcunt, feather-haired McGee Paolo while that absolute thot Ethan is sitting right there? How. Dare.”

While this is a valid point – Ethan is well and truly a hunk-a-spunk – I just can’t help the fact that I find “dumbcunt, feather-haired McGee” irresistible.

As Selena Gomez once crooned, “the heart wants what it wants”, and this heart wants a famous Italian popstar who lies, cheats and manipulates to get what he wants.

Pwoah, I feel much better now that this secret is off my chest. All my previous thoughts of shame and self-loathing are so yesterday.

Lizzie, let’s talk this through over some Sunday brunch. Paolo, call me.