CONTENT WARNING: This article discusses coercive control which is a form of domestic abuse.

During the pandemic, there was a seismic level boom in the popularity of websites and social media pages like Blind Gossip, Deuxmoi and Celeb Spellcheck.

There’s just something about spicy celebrity stories and take-downs that intrigues the hell out of us. Even, or perhaps especially, when that celeb is anonymous, leading the internet to ponder all the sneaky theories.

And while most of the aforementioned gossip gurus churn out their content in the form of single social posts, there’s a wild long read that’s doing the rounds right now that everyone is obsessed with.

It’s titled ‘The Movie Star and Me‘ and it charts the wildly inappropriate and spicy as hell relationship between an intern working on a musical and a very famous, unnamed actor.

The running theory is that the actor is none other than scarf thief Jake Gyllenhaal, but this is completely and totally unconfirmed, so please take this story with a grain of salt.

There are a few nods to this in the piece, including a reference to an “almost equally famous” sister (oh hey Maggie), plus the fact that the lead image of the story is a scene from Taylor Swift‘s ‘All Too Well’ music video, which painted Gyllenhaal as an absolute fuck boi. 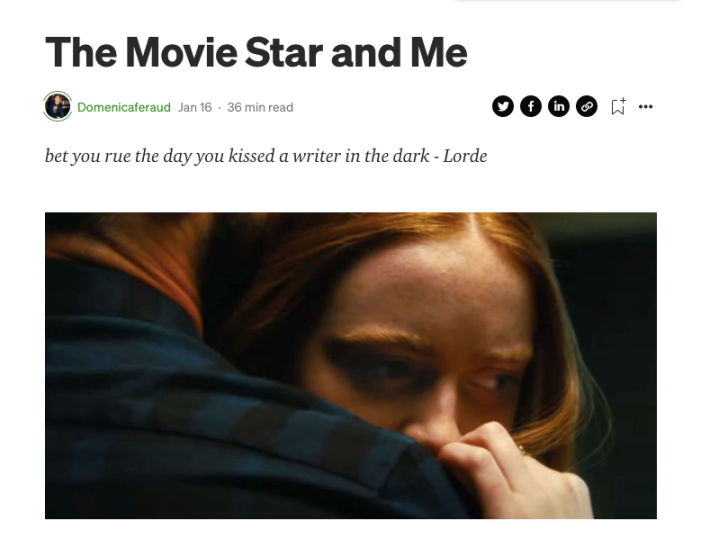 In addition to being a fucking GRIPPING read, the story is also a cautionary tale in love bombing, which far too many of us have experienced.

Love bombing is when someone gives you excessive affection with the intention of making you become totally dependant on them, essentially bombing you with love (hence the name).

Then, once you’re completely and totally devoted to them, they pull back on the amount of love they give you. But by then your self-esteem and happiness has become dependant on their attention, leaving you to chase after them, which is just what they want.

Love bombing is an extremely manipulative tactic used by narcissistic people who basically want to have you under their thumb. Essentially, it’s an insidious form of abuse.

And the reason this story is going so viral — aside from the blind item salaciousness of it all — is that the behaviour of the “movie star” is all too familiar to people who have experienced love bombing.

It started with the intern being pursued by the celebrity who showered her with compliments and overt attention, such as always touching her and complimenting her on the set of the musical they were working on.

He’d invite her to lush events, including Hillary Clinton‘s birthday party, he’d shower her with texts and just generally make her feel special.

Then on day three of the story, he literally asked her to marry him.

“The movie star took my hand in his, examining each of my fingers, ‘We should get married’,” the intern recalled.

“I replied, ‘Okay without glancing up from my computer.’ ‘I’m serious. We should just disappear and get married and have a bunch of kids’.”

But by day six, when she had started to fall in love with him, he completely shut down and started ignoring her.

“I went from crucial to expendable in less than 24 hours,” she wrote. “My heart caught in my throat, hoping he would say something, anything, but it was like I had become invisible.”

It’s a v. long read that requires a comfy chair and a nice cuppa (or a glass of vino, if you’re so inclined), so carve out some time to have a read, then explore the internet theories. It’s an absolute ROLLER COASTER, I tell you.

But perhaps the most important takeaway of this story is that love bombing is dangerous and manipulative, and its effects can sometimes live on much longer than the relationship itself.

If you’d like to speak to someone about domestic violence, please call the 1800