It’s incredible, really, that someone as dedicated to being a pest online managed to tit this up, but that’s Tim Smith for you. The Victorian Liberal MP tried to dunk on Premier Dan Andrews via a Facebook poll, and it backfired immediately. You truly love to see it.

Last night, Smith asked his Facebook followers if Andrews should resign. Fair enough! It’s a big ol’ Liberal Party talking point right now, and Tim Smith loves to post. He asked his followers to vote with reacts, like so: 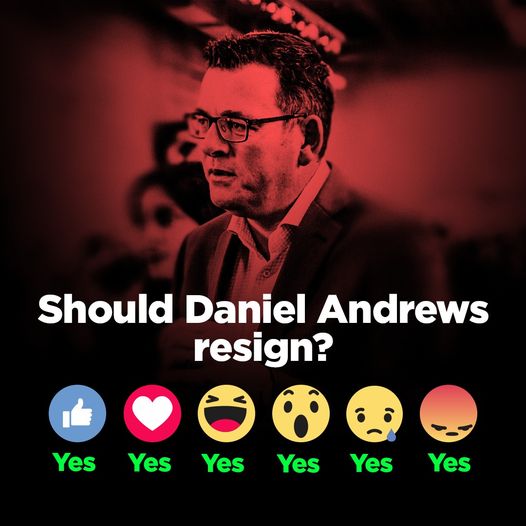 As was pointed out online, it’s a weird flex to call someone a “Dictator” then run a poll with only one answer, but there you have it.

Unfortunately for Smith, he forgot Facebook introduced a ‘care’ reaction, probably because he does not ‘care’ at all. (You see what I did there? I’m very funny.)

Here’s where his poll has ended up:

This is the online equivalent of trying to throw dog shit at someone, only it gets picked up by a gust of wind and splats you right in the face. Some gets in your nose. You can taste it.

Although a heap of comments on Smith’s post are in support of it (which is to say, they are anti-Andrews), there are plenty of others deriding it.

“The vast majority of Victorians support the Andrews government and what it has done during this pandemic,” one  person said. “This kind of thing is not winning you any votes Tim.”

In yet another posting win, Tim Smith also tried the joke out on Twitter, where it fundamentally doesn’t work.

Send him a message… pic.twitter.com/AYJZas439w

Smith has been one of the most vocal critics of Dan Andrews, sledging him as a “schmuck”, a “friendless loser”, a “loony” and a “control freak wowser”. He also just bloody loves to drop in a ‘Dictator Dan’, a nickname which as of today has reached the pages of the Washington Post.

It’s gotten to the point where State Opposition Leader Michael O’Brien has had to “council” Smith, according to the ABC. However, Smith defended his strategy of personal attacks and frequent posting, arguing that in a crowded media market, you have to have some kind of ‘cut through’ appeal. God I wish that wasn’t true.