Victorian Premier Daniel Andrews has a certain way of talking. He likes to keep things brief. He talks directly to his “fellow Victorians”. There’s a certain cadence to his posts, and now there’s an entire Facebook group dedicated to mimicking his frequent updates. It has more than 8,000 members (Editor’s note: as of August 2020, that figure has grown to 20,000).

It’s called ‘A Group Where We All Pretend To Be Daniel Andrews’ (capitalisation our own), and it was started in March 2020 by Melbourne high school student Tom Vaughan, 18. It has one simple premise: to take the absolute piss. 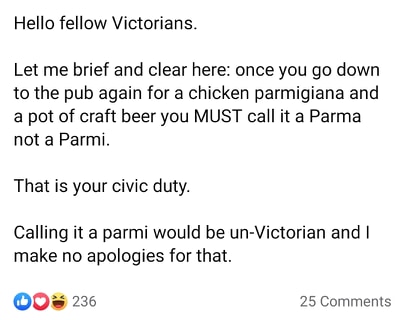 “There are no groups dedicated to pretending to be Daniel Andrews.

“I intend to change that.

“It’s funny, it’s relevant, and it’s what we all deserve.”

The rules are simple: you have to be Dan Andrews when posting, you have to keep it to the classic format, and the same ‘don’t be a dick’ rules you find in every other group apply. 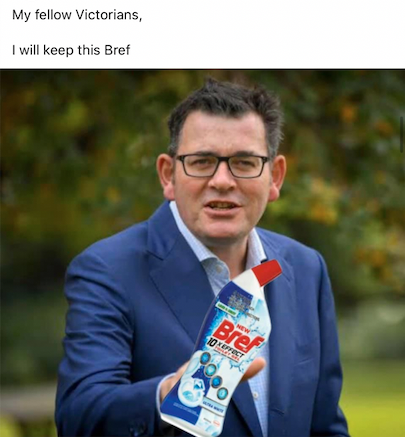 The group exploded in popularity in late April, with Vaughan telling PEDESTRIAN.TV he was approving 50 new people every 10 minutes.

It’s not hard to see why – Andrews has a unique style of posting that’s just ripe for mocking, and since the coronavirus pandemic started his posts have become all the more frequent.

“They use a lot of phrases that are repeated throughout his page,” Vaughan told PTV.

“I think people find it easy to manipulate his format to make something that paints Andrews in a positive or negative light, generally in a comedic way.”

Andrews has always been a popular leader, but recently has shone for his calm and transparent leadership. A recent Essential poll last week showing 73% of Victorians reckoned their government was doing a “quite good” or “very good” job of managing the outbreak (Editor’s note: Again, much has changed over the past few months, and a recent Essential poll puts his current approval rating among Victorians at 49%).

Plus, he totally gets that you want to get back on the beers. Aussies love to see it.

I love the internet so much. Cheers to Dan Andrews ???? pic.twitter.com/4LugDuIaa7

However, Vaughan said the group is neither pro Andrews nor anti Andrews. It exists simply to meme him.

“A lot of the “worship” of Andrews in the group is done as a joke, which seems to happen quite often online – kind of like Shaggy was a few years ago, as well as Keanu Reeves and Big Chungus on Reddit,” Vaughan said.

Like most popular Facebook groups, there’s a certain level of chaos in the midst. Anyone posting racist memes, 5G conspiracies or barracking for the Liberal party to win the next election is derided an “incel boomer” and booted from the group.

“The incel boomer posts have come on both sides [of the political spectrum],” moderator Matthew Lawn told P.TV.

“I’m not in the business of hampering free speech, but when people are posting sexist, racist [memes] or just posting to actively attack someone, well, that just doesn’t belong on the page.

“The dictator Dan one was controversial, but, the page is not pro, or anti Dan, it’s for the format.”

The sheer size of Andrews’ audience means everyone kinda knows what the format is. More than 777,000 people like him on Facebook (Editor’s note: Make that nearly 900,000, as of August), a figure that’s roughly equivalent to 12% of Victoria’s population. (By comparison, NSW Premier Gladys Berejiklian has just under 70,000 likes on Facebook.)

He’s always used his Facebook page to talk directly to the public, but with the increased frequency of his updates now, there’s more posts than ever – making them primo meme content.

So what does the “great man” himself think of the page? By the time of publication, his media team had not yet responded to comment. We’ll update if he does.