Recently I had what I would describe as a typical UFO encounter. I was standing in the dark in a paddock on my mum’s property in Stanthorpe, Queensland, with my mum and my friend Dave after we had had a few wines. We saw a light moving high above the treeline, seemingly making an erratic path across the sky from east to west. After a few minutes of intense scrutiny, it became very obvious that it was a plane. This is how UFO encounters usually go. The Westall UFO incident was not a typical UFO encounter.

Most UFO encounters tend to have a single digit number of witnesses, with rare exceptions like the Hudson Valley sightings). What makes Westall is special is that — at 11am on April 6, 1966 — over 200 students and teachers claim to have seen a UFO in broad daylight.

Witnesses from Westall High School in the Melbourne suburb of Clayton South claim to have seen a silvery, purple-hued saucer around the size of two or three cars float overhead and land in a nearby paddock. According to those witnesses, it stayed there for roughly 20 minutes before it took off at speed, with accounts describing it being pursued by a number of light aircraft. Consultation of flight records reportedly showed that no commercial, private, or military aircraft had been registered in the area at the time.

A small story run in The Age the following day suggested that the saucer could have been a Bureau of Meteorology weather balloon that was tracked into the area by the wind, although this has never stuck as the definitive answer: 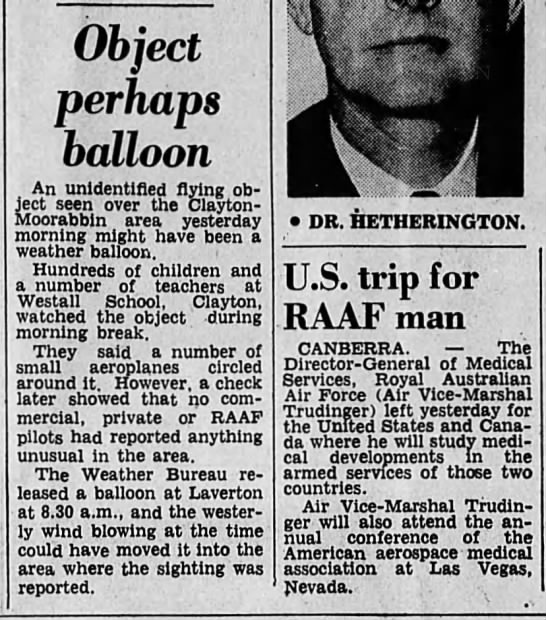 An article published just over a week later in the Dandenong Journal claimed that the investigation was being hampered by the reluctance of witnesses to talk:

After more than a week of investigation, mystery still surrounds the reported sighting last Wednesday of a flying saucer near the Westall High School, Clayton.

Investigations of the report have been hampered by the reluctance of school authorities to permit interviews with eye witness students and staff members.’

Several children attending the school and at least one staff member are reported to have seen the unidentified flying object.

They are believed to have given corroborating descriptions of the object as “a round humped object with a flat base being circled by what appeared to be light aircraft.”

In a later article, the Dandenong Journal said that students and staff had “been instructed to ‘talk to no-one’ about the incident.“

In an interview with an unnamed Australian UFO researcher, Westall High School science teacher Andrew Greenwood described having seen a silvery “rod” in the sky, about the size of a car, and said that the then-headmaster of the school attempt to cover up the sighting. According to Greenwood, the headmaster told students not to talk about it and threatened to fire staff if they did so. Furthermore, when the RAAF contacted the headmaster about the incident, Greenwood alleges that the headmaster told them to “go jump in the lake.“

It is all, admittedly, very tantalising.

Over 50 years later, we still don’t have a definitive answer as to what happened. On the 50th anniversary of the incident, Studio 10 interviewed three people who claimed to have witnessed it as children, all sticking to their story. Interestingly, two of them maintaining that they saw three UFOs in total, with the third saying that to their recollection they only saw one.

Putting aside the fact that aliens are very definitely real and very definitely the culprit, the most likely explanation still seems like an errant balloon, accounting for reports of its shifting shape, its movements, and its silvery colour. UFO researcher Keith Basterfield told the Herald Sun in 2014 that he believed the ‘craft’ to have been a high-altitude balloon used for testing residual radiation levels after the Maralinga nuclear tests conducted in South Australia by the Brits in the 1950s.

This explanation gels quite well with accounts of government agents trying to intimidate witnesses into silence, thanks to the extreme secrecy with which a number of these trials were undertaken. According to Basterfield, he believes he can identify the balloon specifically as HIBAL flight number 292, citing a ‘strikingly missing’ memo that detailed four balloon launches in April, one of which was scheduled for the day before the Westall incident.

In saying that: It’s definitely aliens.

You can listen to a deep dive into this very incident on our very own mysteries podcast, All Aussie Mystery Hour, below: